Carillon crouches in the shadow, eyes fixed on the door. Her knife is in her hand, a gesture of bravado to herself more than a deadly weapon. She’s fought before, cut people with it, but never killed with it. Cut and run, that’s her way.

In this crowded city, that’s not necessarily an option.

If one guard comes through the door, she’ll wait until he goes past her hiding place, then creep after him and cut his throat. She tries to envisage herself doing it, but can’t manage it. Maybe she can get away with just scaring him, or shanking him in the leg so he can’t chase them.

If it’s two, then she’ll wait until they’re about to find the others, hiss a warning and leap on one of them. Surely, between herself, Spar and Rat, they’ll be able to take out two guards without giving themselves away.

She doesn’t let her mind dwell on the other possibility – that it won’t be humans like her who can be cut with her little knife, but something worse like the Tallowmen or Gullheads. The city has bred horrors all its own.

Every instinct in her tells her to run, to flee with her friends, to risk Heinreil’s wrath for returning empty- handed. Better yet, to not return at all, but take the Dowager Gate or the River Gate out of the city tonight, be a dozen miles away before dawn.

Six. The door opens and it’s six guards, all human, one two three big men, in padded leathers, maces in hand, and three more with pistols. She freezes for an instant in terror, unable to act, unable to run, caught against the cold stone of the old walls.

And then – she feels the shock through the wall before she hears the roar, the crash. She feels the whole House of Law shatter. She was in Severast when there was an earth tremor once, but it’s not like that – it’s more like a lightning strike and thunderclap right on top of her. She springs forward without thinking, as if the explosion had physically struck her, too, jumping through the scattered confusion of the guards.

One of them fires his pistol, point blank, so close she feels the sparks, the rush of air past her head, hot splinters of metal or stone showering down across her back, but the pain doesn’t blossom and she knows she’s not hit even as she runs.

Follow me, she prays as she runs blindly down the passageway, ducking into one random room and another, bouncing off locked doors. From the shouts behind her, she knows that some of them are after her. It’s like stealing fruit in the market – one of you makes a big show of running, distracts the fruitseller, and the others grab an apple each and one more for the runner. Only, if she gets caught, she won’t be let off with a thrashing. Still, she’s got a better chance of escaping than Spar has.

She runs up a short stairway and sees an orange glow beneath the door. Tallowmen, she thinks, imagining their blazing wicks on the far side, before she realises that the whole north wing of the square House is ablaze. The guards are close behind her, so she opens the door anyway, ducking low to avoid the thick black smoke that pours through.

She skirts along the edge of the burning room. It is a library, eh, with long rows of shelves packed with rows of cloth- bound books, journals of civic institutions, proceedings of parliament. At least, half of it is a library; the other half was a library. Old books burn quickly. She clings to the wall, finding her way through the smoke by touch, trailing her right hand along the stone blocks while groping ahead with her left.

One of the guards has the courage to follow her in, but, from the sound of his shouts, she guesses he went straight forward, thinking she’d run towards the fires. There’s a creak, and a crash, and a shower of sparks as one of the burning bookcases topples. The guard’s shouts to his fellows become a scream of pain, but she can do nothing for him. She can’t see, can scarcely breathe. She fights down panic and keeps going until she comes to the side wall.

The House of Law is a quadrangle of buildings around a central green. They hang thieves there, and hanging seems like a better fate than burning right now. But there was a row of windows, wasn’t there? On the inside face of the building, looking out onto that green. She’s sure there is, there must be, because the fires have closed in behind her and there’s no turning back.

The outstretched fingers of her left hand touch warm stone. The side wall. She scrabbles and sweeps her fingers over it, looking for the windows. They’re higher than she remembers, and she can barely reach the sill even when stretching, standing on tiptoes. The windows are thick, leaded glass, and, while the fires have blown some of them out, this one is intact. She grabs a book off a shelf and flings it at the glass, to no avail. It bounces back. There’s nothing she can do to break the glass from down here.

On this side, the sill’s less than an inch wide, but if she can get up there, maybe she can lever one of the panes out, make an opening. She takes a step back to make a running jump up, and a hand closes around her ankle. 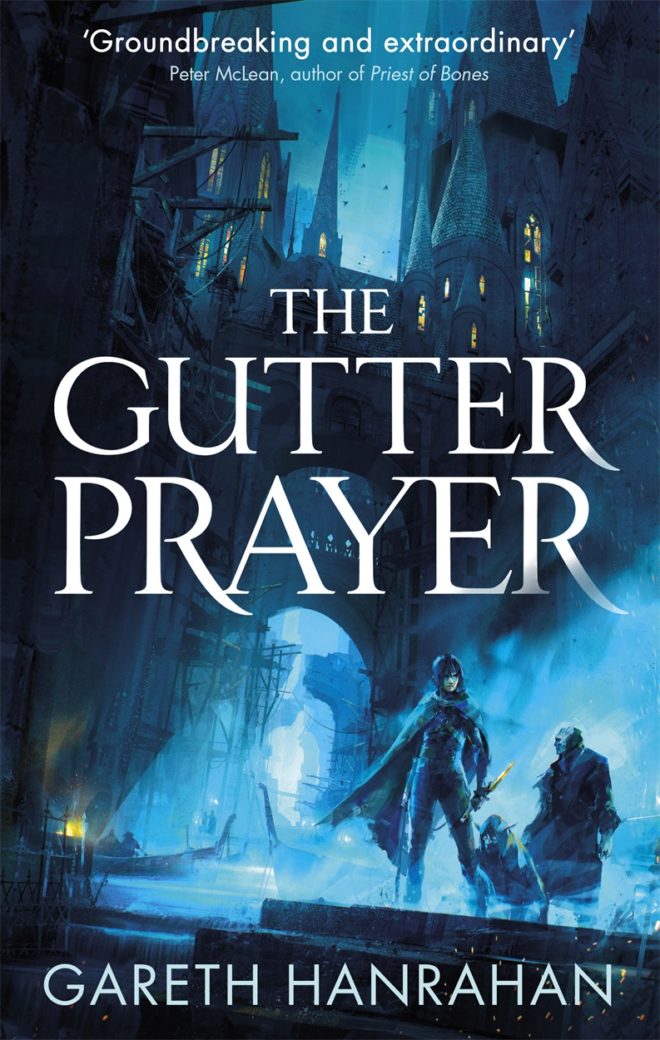 Gareth Hanrahan’s three-month break from computer programming to concentrate on writing has now lasted fifteen years and counting. He’s written more gaming books than he can readily recall, by virtue of the alchemical transmutation of tea and guilt into words. He lives in Ireland with his wife and twin sons. Follow him on Twitter @mytholder.

“A groundbreaking and extraordinary novel . . . Hanrahan has an astonishing imagination” Peter McLean, author of Priest of Bones

“Employing an enviable skill with both plotting and prose, Gareth Hanrahan has in The Gutter Prayer woven an intricate and finely crafted web of compelling characters navigating a city rich in dark and original wonders. I await the sequel with the keenest anticipation” Anthony Ryan, author of Blood Song

“A gripping tale that meshes beautifully with its fascinating, darkly inventive setting” James Islington, author of The Shadow of What Was Lost

“The Gutter Prayer is captivating and complex. Guerdon is a city that seethes with history, horror, and hidden secrets, and Hanrahan’s assured style is reminiscent of China Mievelle in the best way possible” Nicholas Eames, author of Kings of the Wyld

“Beautifully written. Gripping. Guerdon is the city of my dreams” Anna Smith Spark, author of The Court of Broken Knives