The Jasmine Throne begins an epic fantasy trilogy set in a world inspired by the history and epics of India, in which a captive princess and a maidservant in possession of forbidden magic become unlikely allies.

In the court of the imperial mahal, the pyre was being built.

The fragrance of the gardens drifted in through the high windows—sweet roses, and even sweeter imperial needle-flower, pale and fragile, growing in such thick profusion that it poured in through the lattice, its white petals unfurled against the sandstone walls. The priests flung petals on the pyre, murmuring prayers as the servants carried in wood and arranged it carefully, applying camphor and ghee, scattering drops of perfumed oil.

On his throne, Emperor Chandra murmured along with his priests. In his hands, he held a string of prayer stones, each an acorn seeded with the name of a mother of flame: Divyanshi, Ahamara, Nanvishi, Suhana, Meenakshi. As he recited, his courtiers—the kings of Parijatdvipa’s city-states, their princely sons, their bravest warriors—recited along with him. Only the king of Alor and his brood of nameless sons were notably, pointedly, silent.

Emperor Chandra’s sister was brought into the court.

Her ladies‑in‑waiting stood on either side of her. To her left, a nameless princess of Alor, commonly referred to only as Alori; to her right, a high-blooded lady, Narina, daughter of a notable mathematician from Srugna and a highborn Parijati mother. The ladies‑in‑waiting wore red, bloody and bridal. In their hair, they wore crowns of kindling, bound with thread to mimic stars. As they entered the room, the watching men bowed, pressing their faces to the floor, their palms flat on the marble. The women had been dressed with reverence, marked with blessed water, prayed over for a day and a night until dawn had touched the sky. They were as holy as women could be.

Chandra did not bow his head. He watched his sister.

She wore no crown. Her hair was loose—tangled, trailing across her shoulders. He had sent maids to prepare her, but she had denied them all, gnashing her teeth and weeping. He had sent her a sari of crimson, embroidered in the finest Dwarali gold, scented with needle-flower and perfume. She had refused it, choosing instead to wear palest mourning white. He had ordered the cooks to lace her food with opium, but she had refused to eat. She had not been blessed. She stood in the court, her head unadorned and her hair wild, like a living curse.

His sister was a fool and a petulant child. They would not be here, he reminded himself, if she had not proven herself thoroughly unwomanly. If she had not tried to ruin it all.

The head priest kissed the nameless princess upon the forehead. He did the same to Lady Narina. When he reached for Chandra’s sister, she flinched, turning her cheek.

“You may rise,” he said. “Rise, and become mothers of flame.”

His sister took her ladies’ hands. She clasped them tight. They stood, the three of them, for a long moment, simply holding one another. Then his sister released them.

The ladies walked to the pyre and rose to its zenith. They kneeled.

His sister remained where she was. She stood with her head raised. A breeze blew needle-flower into her hair—white upon deepest black.

“Princess Malini,” said the head priest. “You may rise.”

She shook her head wordlessly.

Rise, Chandra thought. I have been more merciful than you deserve, and we both know it.

“It is your choice,” the priest said. “We will not compel you. Will you forsake immortality, or will you rise?”

The offer was a straightforward one. But she did not move. She shook her head once more. She was weeping, silently, her face otherwise devoid of feeling.

Chandra stood. The prayer stones clinked as he released them.

Of course it had come to this.

He stepped down from his throne. He crossed the court, before a sea of bowing men. He took his sister by the shoulders, ever so gentle.

“Do not be afraid,” he told her. “You are proving your purity. You are saving your name. Your honor. Now. Rise.”

One of the priests had lit a torch. The scent of burning and camphor filled the court. The priests began to sing, a low song that filled the air, swelled within it. They would not wait for his sister.

But there was still time. The pyre had not yet been lit.

As his sister shook her head once more, he grasped her by the skull, raising her face up.

He did not hold her tight. He did not harm her. He was not a monster.

The priest touched his torch to the pyre. The wood, slowly, began to burn.

Firelight reflected in her eyes. She looked at him with a face like a mirror: blank of feeling, reflecting nothing back at him but their shared dark eyes and serious brows. Their shared blood and shared bone. 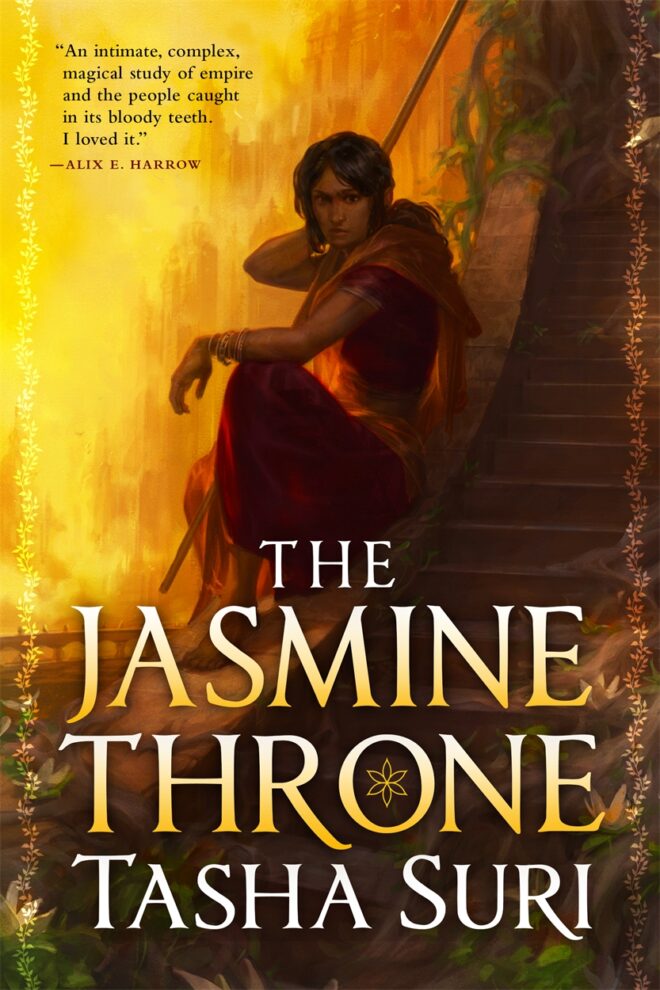 Tasha Suri was born in Harrow, North-West London. The daughter of Punjabi parents, she spent many childhood holidays exploring India with her family, and still fondly remembers the time she was chased around the Taj Mahal by an irate tour guide. She studied English and Creative Writing at Warwick University, and now lives in London where she works as a librarian. To no one’s surprise, she owns a cat. A love of period Bollywood films, history and mythology led her to begin writing South Asian-influenced fantasy.

“The Jasmine Throne is an intimate, complex, magical study of empire and the people caught in its bloody teeth. It’s about resistance and power, histories both personal and political, and the heroes who must become monsters to survive. I loved it” Alix E. Harrow

“Empire of Sand thoroughly swept me away” S. A. Chakraborty, author of City of Brass

“A darkly intricate, devastating and utterly original story about the ways we are bound by those we love” R. F. Kuang, author of The Poppy War, on Empire of Sand

“Draws you into an intricately realised world of blood and secrets. An arresting and magical history told through the eyes of an indomitable heroine. I cannot ask for more” Jeannette Ng on Empire of Sand