As he rode across Tierra, the constant pounding hoofbeats echoed the pounding of his heart. After days of hard travel, Jenirod no longer heard the sound. He fought hunger, thirst, and exhaustion, keeping himself awake only through sheer determination, and pressed on. He had already crossed half a continent, but he had to reach Calay.

Queen Anjine needed to know what had happened at the Gremurr mines. After two decades of war, the Aidenists had finally secured a major victory against the evil Urecari.

Jenirod had pushed two of his three warhorses nearly to death before turning them loose and riding on. The animals could take care of themselves until some other traveler found them. Son of the Eriettan destrar, he had grown up with horses, won countless trophies and ribbons in Landing Day cavalcades; he couldn’t believe he was abandoning such fine mounts. In fact, mere months ago, Jenirod’s proud and shuttered mind would never have imagined that any mission could be so all-consuming. Now he rode long past the point where common sense told him he should sleep and let the horses rest.

If the queen pulled all her forces together, the Tierran army could ensure the final defeat of the soldan-shah. . . .

After the military triumph at Gremurr, fires had been extinguished, Uraban bodies dumped into the sea, and brave Aidenist fighters buried in graves marked by fishhook posts. But the queen needed to know of the victory as soon as possible, so she could plan for the next phase of the war. Jenirod had volunteered to make the long and crushing ride; no one was more qualified.

He had taken off as if demons were slashing at his horses’ flanks, determined to go faster than anyone believed possible, needing to do something, anything, to blot out the stain of his foolish, immature actions. And after so many tragedies suffered, so many innocent Aidenists killed by the vengeful Urecari—including Prince Tomas—Jenirod longed to deliver unabashed good news for a change.

He had crossed the rugged new mountain path by which the Tierran military reached the undefended mines at Gre murr. At the Corag stronghold of Stoneholm, Jenirod paused for only a few hours to refill his waterskins and pack his sad dlebags with food, then rode down through the foothills to the river and the well-traveled road that led to the Tierran capital.

All Tierra would celebrate the great Aidenist triumph, though cheers and applause no longer mattered to Jenirod. He would offer Queen Anjine whatever advice he could, but doubted she would accept it from him. Those scars would not heal soon . . . if ever.

These past few months had shown Jenirod that war bore little resemblance to the glorious depictions in pageantry, stories, and songs. During the interminable, exhausting ride across the land, he had time to ponder all the destruction that had flowed from his blind naïveté. How he regretted his earnest but juvenile suggestion to Destrar Tavishel that they attack a defenseless Urecari shrine, just to impress Anjine. Jenirod had never considered the consequences, never imagined what the Urecari retaliation might cost. Poor Tomas!

Now he felt shamed and soiled by what they had done. Jenirod had changed much in his heart, but the queen would never forgive him.

Still, his news would give hope to countless saddened families across Tierra. In the victory at Gremurr, the army had freed hundreds of slaves from the mines, innocent Aidenists who had been captured in raids or seized from fishing boats in the Oceansea. They were alive, and Jenirod carried a complete list rolled up in his saddlebags.

In the aftermath of the battle, Subcomdar Mateo Bornan had gathered the freed slaves and instructed scribes with paper and ink (confiscated from the Gremurr administrator’s office) to take down all their information so their families could be notified. The scribes covered sheet after sheet with the names, homes, and occupations of the survivors. Those names would bring joy to so many in Calay. Their loved ones would be coming home as soon as possible. Subcomdar Bornan and the first group of freed prisoners would arrive within a few weeks.

But first, Jenirod had to see the queen.

It was sunset by the time his wobbly, weary horse reached the outskirts of the capital city. Jenirod didn’t know what day it was. Ahead, rivers flowed into the harbor and buildings clustered around the waterfront, where long piers extended out past the tidal mud into deeper water. And, silhouetted by the low, blood-orange sun, he could discern the outline of Calay Castle in the distance.

Half dead, he pulled his horse to a halt outside a warehouse at the harbor’s edge and slid from his saddle as a curious merchant emerged, blinking at him. Jenirod knew he was filthy, wild-haired, and unshaven, but none of that mattered. He was intent on a thin bay mare tied to a fencepost. “A horse—I need your horse, in the name of the queen.”

The merchant eyed Jenirod and his mount, noting the flecks of foam at the horse’s mouth and flanks and seeing how it trembled just standing there, but he recognized fine horse flesh. “Have mine. It’s a more than fair exchange.”

Jenirod took the saddlebags, patted his mount on the neck. His legs could barely hold him up. “Take care of this horse. He’s served me well.” Jenirod didn’t even ask for water or food. So close now. He staggered over to the spindly bay mare, climbed onto the horse’s back—no time for a saddle—clutched the mane, and rode off into the city.

In less than an hour, he reached the castle gate and shouted in a ragged voice, “Guards, bring me to the queen! I must see the queen!”

Jenirod looked like a wild man, and the royal guardsmen were skeptical, but Guard-Marshall Vorannen recognized him immediately. “Jenirod? By the Fishhook, what’s happened to you?”

“A great battle at Gremurr . . . we defeated the Curlies! Please, I have to tell Queen Anjine!” Guards helped him down from the mare, and Jenirod heaved, then reeled, nearly collapsing, but two men held him up. “All right . . . I think I’ll take some water first.” He didn’t see who handed a cup to him.

“We’ve sent word to the queen,” Vorannen said. “Maybe you’d like to change your clothes, wash up, rest?”

Jenirod realized that he stank of horse, sweat, and horse sweat, but he knew his priority. He shook his head, and Vorannen saw  the unexpected ferocity in his eyes. “Follow me.”

Jenirod knew that seeing him would remind Anjine of the Uraban emissary tossing her brother’s severed head onto the throne room floor. When he stood before her, Jenirod swallowed hard and sketched a hurried bow. He had practiced his speech to the rhythm of thumping hoofbeats, and the words that had been running through his head during the endless ride now spilled out of him. “My Queen, your armies conquered Gremurr! We slew many followers of Urec and kept others alive to work the mines and foundries. It is the most crushing defeat of the enemy so far in this war.”

As her eyes widened, he talked faster. “And we freed the Tierran prisoners who were forced to labor in the mines. Hundreds are alive and able to return home.” He handed her the rolls of names. “Here is a list.”

Astonished, Anjine unrolled the papers, scanned the names. A flush had come to her cheeks. “I didn’t know you or Mateo had gone to Gremurr.” She sat straight, entirely a queen now. “Give me a full report.”

Wasting no words, Jenirod described the surprise attack led by armored mammoths from Iboria, how the Tierran army had captured the mines and foundries, as well as seven armored Uraban warships. “Destrar Broeck is eager to take those ironclads and strike undefended enemy cities on the Middlesea shore, but he sent me here so you can plan our final Tierran victory.”

“He was healthy and uninjured when I left him. Subcomdar Bornan will lead back as many of the prisoners as are able to make the trek. Ondun surely has smiled on us, my Queen.”

Anjine sat back in her chair in silence. Waiting for her reaction, Jenirod began to feel even more weary, more hungry, more filthy. Finally, she gave him a cool, formal nod. “I will have this list copied and distributed as widely as possible. The people need to know.” She looked down at the names, as if unable to comprehend so many. “This news has been a long time coming, Jenirod.” 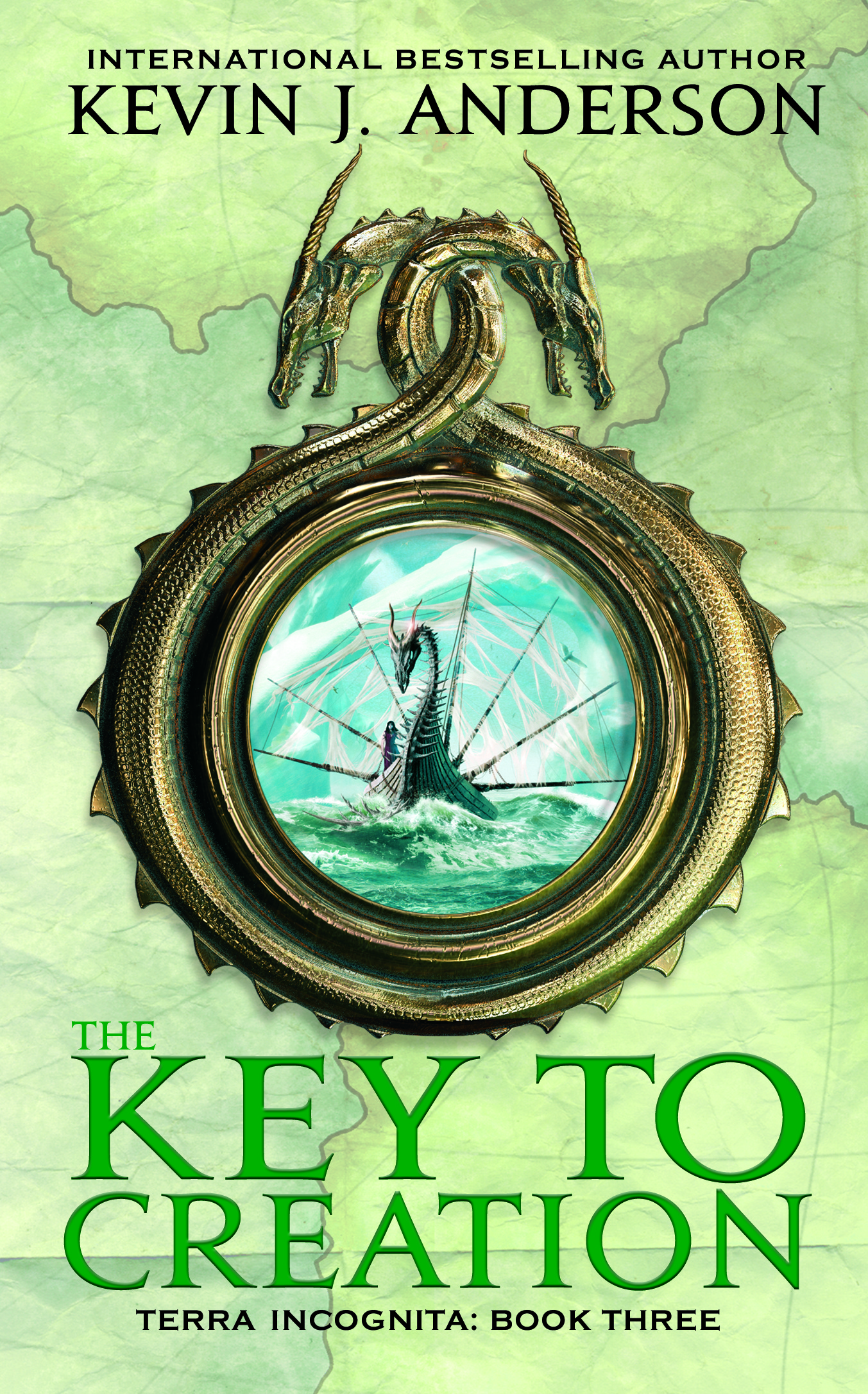 Kevin J. Anderson has written 41 national bestsellers and has over 20 million books in print worldwide in thirty languages. He has been nominated for the Nebula Award, the Bram Stoker Award, and the SFX Readers’ Choice Award.