A triumphant return to epic fantasy by the author of Monument – a band of elite warriors must track down a man once thought dead. This ebook is book one in a two part epic fantasy series which will be collected in print in July 2016, from the author David Gemmell called a ‘magnificent storyteller’.

The crows are to blame.

Thronging the cluster-reeds, flapping and cawing, they are frightening the fish. The silver trout are hiding somewhere under the surface, maybe tucked in the gloom of the overhanging riverbank, perhaps cloistered in the weeds sprouting from the riverbed.

Wherever they are, they refuse to show themselves. The boy has tried various types of bait, from maggots to sweetcorn, and still they lie low, fearful of the dark birds.

Yes; the crows are spoiling everything.

Laying the rod on the grass, the boy troops along the riverbank.

It is a hot day, the sun warm on his bare shoulders, the sky clear. The previous night, he had dreamt of a day such as this. Standing on the riverbank, he had fished the river, catching trout after trout. In fact, he fished as no man had fished before: each time he cast off, a trout had snapped up the bait as soon as the hook was on the water. No pause, no delay. Just cast, snap and a slow reeling in. It had happened again and again, until his catch lay in a waist-high heap, scales gleaming pink-silver.

Of course, dreams are not prophecies, but theatre stages on which a fellow’s wishes and fears are enacted. But he likes to think they contained a grain of truth, a hint of premonition.

So it was that, when he woke and went to breakfast, he said to his mother, ‘How many trout do you want for supper?’

‘You are going to the river? Take care, then,’ she had said.

She pretended to think. ‘One will be enough.’

‘I will get two,’ he said. ‘There is no reason we should starve.’

At this rate, he will not catch anything. Except sunburn. Striding toward the cluster-reeds, fifty paces away, he waves his arms and shouts.

The crows are unperturbed. He is not surprised: they are stubborn creatures, difficult to frighten. Few things alarm them – certainly not his cries and gestures, nor the grinning scarecrows in Farmer Heatle’s wheatfields, nor the local customs of sprinkling crowblood and powdered cats’ bones into the soil where crops grow.

Drawing closer, he spots a cloud of flies hovering over the reeds.

Small wonder the crows have not fled. Something dead is trapped amongst the thin stalks. A drowned dog, perhaps. Or a sheep drifted down from Bulkin’s Weir. It hardly matters. As long as the dead thing remains, the crows will not go away. Whatever it is, the boy will have to move it. An unpleasant task, no doubt. Most likely, the thing will be rotten, maggoty and foul-smelling enough to make a rat vomit. It might well fall to pieces in his hands, too. But that is of no odds. If need be, he will cleanse himself in the river.

Ten paces away, he spots a patch of colour in the reeds. A flash of scarlet. The colour of death, of mutilation. Then something flashes gold, catching the sunlight.

Intrigued, the boy picks up his pace. Five yards away, and the crows bundle off, settling on the ground a little further downstream.

The boy halts at the reeds. Looks down.

It is a man. Or rather, a man’s corpse, trapped where the reeds sink into the water.

The boy has seen only one dead body before. His grandmother’s, lodged snugly in an open casket on her burial day, preened and powdered, radiating tranquil acceptance. The fellow in the reeds is in his seventh decade, his grandmother’s age, more or less – but there the similarities end. He does not appear contented. He looks as though he would scream, were it possible. Decaying, his flesh slithers off his skull in greasy clods whilst that which remains bears traces of monstrous ill-treatment. His nose has been sliced off, as have his lips. His teeth are shattered and his tongue, lolling from his mouth, has been halved lengthwise to resemble a serpent’s. Embedded in his eyeballs, there are darning needles, glittering; all that remains of his sheared-off ears are gill-like furrows.

The corpse wears scarlet robes. This is important, thinks the boy. Important, too, is the pendant around his neck, a gold triangle on a fine-linked chain. Both garb and adornment signify something, although he cannot say what.

Something stirs in the corpse’s mouth. Something sleek, trembling in the darkness.

A bubble rises, popping on the surface. Then a trout slithers out, slopping over the man’s cheekbone and plunging into the water.

The boy yells and this time, the crows skirl away, shrieking toward the wheatfields.

By noon, the riverbank teems with Papal Wardens. The law-keepers are impressive in their black tunics and helms, and their sheathed swords give the boy a tiny buzz of excitement. They are important men, engaged in important business. Stitched on their tunics are elongated red triangles, similar to the corpse’s pendant. The boy’s father has explained what the insignia represents and the boy understands that the corpse is not that of any old man, but one of the most powerful individuals in Druine.

‘Aye, he vanished a month ago. Snatched off Grimlarren Moor, his guards slain. Gone without a trace,’ says a Warden, his grizzled face thoughtful. ‘No ransom was issued, so we wondered why he had been taken. I suppose we have our answer now.’

Hands on hips, the boy’s father stands close to the Warden. ‘Blessed Master Helligraine,’ he murmurs, shaking his head. ‘Is that it, then? He was kidnapped purely to what – suffer?’

‘To be punished,’ confirms the Warden. ‘There are many heathens in Druine, deluded souls who do not tread the true path. Mercifully, they hold no sway – all they can do is lash out like idiots, making stupid gestures like this.’ He pats the side of a cart. The Master’s corpse lies on the back, hidden under a tarpaulin. Its journey from the river was not uneventful: rotten from flesh to bone-marrow, it had shed a hand, and a foot, and entrails had leaked from its belly, slopping onto the grass. ‘It was revenge, born of frustration. You ever seen a hen-pecked man kick his dog, for he dares not square up to his wife? This is the same thing, more or less.’

‘They say Helligraine was a good man.’

‘One of the finest to ever walk the corridors of the Sacros,’ says the Warden. ‘He will be in Paradise now. The Four will have led him through the Forest, and he will be reaping the rewards of a life well lived.’

Evening comes and the boy sits at the table in the kitchen, taking his evening meal. As soon as the Wardens were gone, his father had throttled the plumpest chicken, which his mother served with onion gravy and potatoes flavoured with mint. Now, they talk about the corpse, for there is little else they can think of.

The boy says, ‘He was a good man. One of the finest to walk the corridors of the Sacros.’

His father and mother look at him.

The boy blinks. ‘That is what you said, Father. And the Warden.’

‘It is not wise to speak truthfully in the company of those men,’ says his father, laying his knife upon his plate. ‘Utter an ill word about the Masters, and you will be hanged. And all words, the honest ones, about those scarlet-clad weasels are ill. To a man, they are filthy, corrupt, greedy pieces of dung. They set taxes, declare wars and force us to live under the cruellest laws imaginable. I’ll give you an example. You know what they believe, don’t you?’

The boy glances uneasily at his mother. ‘Thousands of years ago, four men were told by the creator-god to walk through Druine and as they went, they healed the sick and told people how they ought to live. Then they met on the top of a mountain called Scarrendestin. That is what the triangle on the Warden’s clothes means. It is supposed to be the mountain.’

‘On top of the mountain, they Melded, which means they joined together to become a single holy being. Now, when folk die, they are sent to the Eltheryn Forest, which is a horrible place, full of demons. But if you are a good person, the Four protect you, and lead you to Paradise.’

‘You can see it is all nonsense, can’t you?’

The boy hesitates. ‘Is it?’

‘It is horsesh—’ Catching himself, the boy’s father grunts. ‘It is horse manure, from top to bottom. A fairytale, nothing more. But if you do not believe it, or pretend to, the Masters will have you killed. And before they kill you, they will torture you. Do you remember how Helligraine was all chopped up?’

The boy nodded. He doubted he would ever forget.

‘The Masters will do worse, far worse. So even though you and I know they talk nonsense, we must keep it to ourselves. You understand?’

The boy’s father pats him on the hand. ‘Good lad,’ he says, picking up the knife and skewering a lump of chicken. 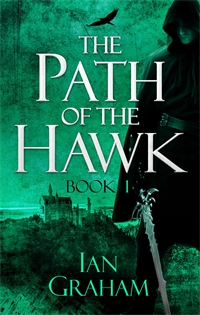