The Rage of Dragons launches an unmissable epic fantasy series about a world caught in an endless war and the young man who will become his people’s only hope for survival.

Queen Taifa stood at the bow of Targon, her beached warship, and looked out at the massacre on the sands. Her other ships were empty. The fighting men and women of the Chosen were already onshore, were already killing and dying. Their screams, not so different from the cries of those they fought, washed over her in waves.

She looked to the sun. It burned high overhead and the killing would not stop until well past nightfall, which meant too many more would die. She heard footsteps on the deck behind her and tried to take comfort in the sounds of Tsiory’s gait.

Taifa nodded, permitting him to speak, but did not turn away from the slaughter on the shore. If this was to be the end of her people, she would bear witness. She could do that much.

“We cannot hold the beach,” he told her. “We have to retreat to the ships. We have to relaunch them.”

“No, I won’t go back on the water. The rest of the fleet will be here soon.”

“Families, children, the old and infirm. Not fighters. Not Gifted.”Taifa hadn’t turned. She couldn’t face him, not yet. “It’s beautiful here,” she told him. “Hotter than Osonte, but beautiful. Look.” She pointed to the mountains in the distance. “We landed on a peninsula Tbordered and bisected by mountains. It’s defensible, arable. We could make a home here. Couldn’t we? A home for my people.”

She faced him. His presence comforted her. Champion Tsiory, so strong and loyal. He made her feel safe, loved. She wished she could do the same for him.

His brows were knitted and sweat beaded on his shaved head. He had been near the front lines, fighting. She hated that, but he was her champion and she could not ask him to stay with her on a beached ship while her people, his soldiers, died.

He shifted and made to speak. She didn’t want to hear it. No more reports, no more talk of the strange gifts these savages wielded against her kind.

“The Malawa arrived a few sun spans ago,” she told him. “My old nursemaid was on board. She went to the Goddess before it made ground.”

“Do you remember how she’d tell the story of the dog that bit me when I was a child?”

“I remember hearing you bit it back and wouldn’t let go. Sanura had to call the Queen’s Guard to pull you off the poor thing.”

Taifa turned back to the beach, filled with the dead and dying in their thousands. “Sanura went to the Goddess on that ship, never knowing we found land, never knowing we escaped the Cull. They couldn’t even burn her properly.” The battle seemed louder. “I won’t go back on the water.”

“Then we die on this beach.”

The moment had arrived. She wished she had the courage to face him for it. “The Gifted, the ones with the forward scouts, sent word. They found the rage.” Taifa pointed to the horizon, past the slaughter, steeling herself. “They’re nested in the Central Mountains, the ones dividing the peninsula, and one of the dragons has just given birth. There is a youngling and I will form a coterie.”

She could hear his desperation. She would not let it sway her.

“The savages, how can we make peace if we do this to them?” Tsiory said, but the argument wasn’t enough to change her mind, and he must have sensed that. “We were only to follow them,” he said. “If we use the dragons, we’ll destroy this land. If we use the dragons, the Cull will find us.”

That sent a chill through her. Taifa was desperate to forget what they’d run from and aware that, could she live a thousand cycles, she never would. “Can you hold this land for me, my champion?” she asked, hating herself for making this seem his fault, his shortcoming.

Tsiory wouldn’t meet her eyes. That was how much she’d hurt him, how much she’d disappointed him. “Only for a little while,” she said, trying to bring him back to her. “Too little for the Cull to notice and just long enough to survive.”

“A short while.” She reached up and touched his face. “I swear it on my love for you.” She needed him and felt fragile enough to break, but she was determined to see her people safe first. “Can you give us enough time for the coterie to do their work?”

Tsiory took her hand and raised it to his lips. “You know I will.” 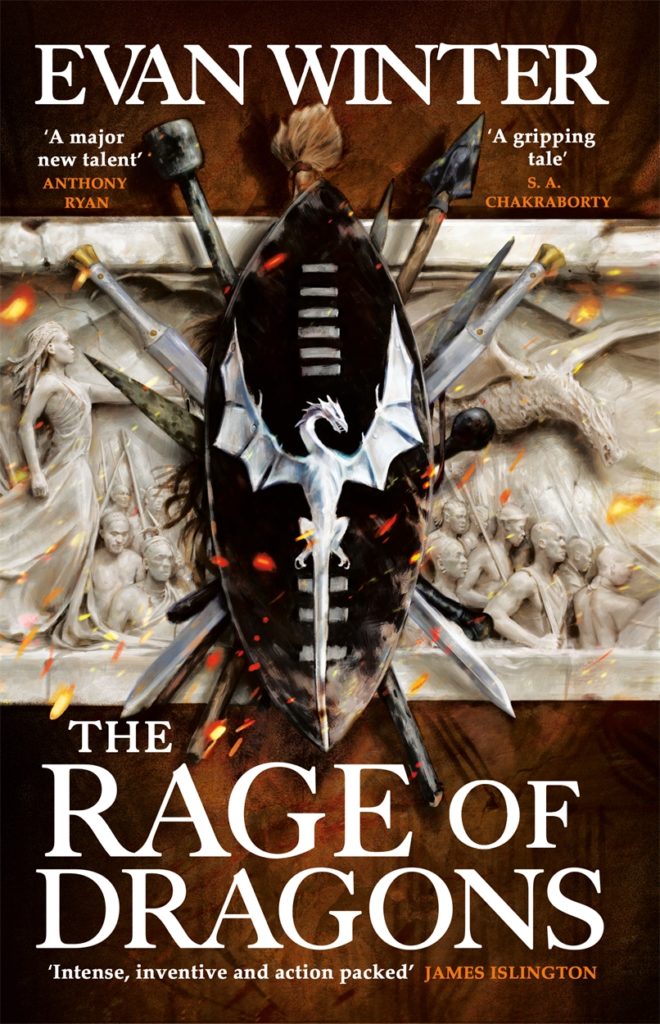 “Expertly structured with a keen eye for action and character,The Rage of Dragons is a captivating epic heroic fantasy from a major new talent” Anthony Ryan, author of Blood Song

“A Xhosa-inspired world complete with magic, dragons, demons and curses, The Rage of Dragons takes classic fantasy and imbues it with a fresh and exciting twist” Anna Stephens, author of Godblind

“Compelling, expansive and rich. Winter has created an exciting and immersive world of magic, vengeance and wonder” Micah Yongo, author of Lost Gods

“Intense, inventive and action-packed from beginning to end – a relentlessly gripping, brilliant read” James Islington, author of The Shadow of What Was Lost

“A refreshingly brutal and imaginative tale of survival and revenge. Evan Winter’s battles are visceral, bloody masterpieces, and Tau’s climb from exiled Lesser to Igonyama is earned in a way few writers could ever match” David Dalglish, author of A Dance of Cloaks