Istoki was not the smallest, poorest, or most remote village in Izmoroz, but it was close. The land was owned by the noble Ovstrovsky family, and the peasants who lived and worked there paid an annual tithe in crops every year at harvest time. The Ovstrovskys were not known for their diligence, and the older folk in Istoki remembered a time when they would even forget to request their tithe. That was before the war. Before the empire.

But now imperial soldiers arrived each year to collect their own tithe, as well as the Ovstrovsky family’s. And they never forgot.

Little Vadim, age eight and a half, sat on a snow-covered log at the eastern edge of the village and played with his rag doll, which was fashioned into the likeness of a rabbit. He saw the imperial soldiers coming on horseback along the dirt road. Their steel helmets and breastplates gleamed in the winter sun as their horses rode in two neat, orderly lines. Behind them trundled a wagon already half-full with the tithes of other villages in the area.

They came to a halt before Vadim with a great deal of clanking, their faces grim. Each one seemed to bristle with sharp metal and quiet animosity. Their leader, a man dressed not in armor but in a bright green wool uniform with a funny cylindrical hat, looked down at Vadim.

“You there. Boy.” The man in green had black hair, olive skin, and a disdainful expression.

Vadim hugged his doll tightly and said nothing. His mother had told him it was best not to talk to imperial soldiers because you never knew when you might say the wrong thing to them.

“Run along and tell your elder we’re here to collect the annual tithe. And tell him to bring it all here. I’d rather not go slogging through this frozen mudhole just to get it.”

He knew he should obey the soldier, but when he looked at the men and horses looming above him, his whole body stiffened. He had never seen real swords before. They were buckled to the soldiers’ waists with blades laid bare so he could see their keen edges. He stared at them, clutched the doll to his chest, and did not move.

The man in green sighed heavily. “Dear God in Heaven, they’re all inbred imbeciles out here. Boy! I’m speaking to you! Are you deaf?”

He tried to move. He really did. But his legs wouldn’t work. They were frozen, fixed in place as if already pierced by the glittering swords.

The man muttered to himself as he leaned over and reached into one of his saddlebags. “This is why I’m counting the days until my transfer back to Aureum. If I have to see one more—”

An arrow pierced one side of the man’s throat and exited the other side. Blood sprayed from the severed artery, spattering Vadim’s face and hair. He gaped as the man clutched his gushing throat. The man’s eyes were wide with surprise and he made faint gargling noises as he slowly slid from his saddle.

“We’re under attack!” shouted one of the other soldiers.

“Which direction?” shouted another.

A third one lifted his hand and pointed out into one of the snowy fields. “There! It’s—”

Then an arrow embedded itself in his eye and he toppled over.

Vadim turned his head in the direction the soldier had been pointing and saw a lone rider galloping across the field, the horse kicking up a cloud of white. The rider wore a thick leather coat with a hood lined in white fur. Vadim had never seen a Ranger of Marzanna before because they were supposed to all be dead now. But he had been raised on stories of the Strannik, told by his mother in hushed tones late at night, so Vadim knew that was what he saw.

“Get into formation!” shouted a soldier. “Archers, return fire!”

But the Ranger was closing fast. Vadim had never seen a horse run so swiftly. It seemed little more than a blur of gray and black across the white landscape. Vadim’s mother had said that a Ranger of Marzanna did not need to guide their horse. That the two were so perfectly connected, they knew each other’s thoughts and desires.

The Ranger loosed arrow after arrow, each one finding a vulnerable spot in a soldier’s armor. The soldiers cursed as they fumbled for their own bows and let fly with arrows that overshot their rapidly approaching target. Their faces were no longer proud or grim, but tense with fear.

As the Ranger drew near, Vadim saw that it was a woman. Her blue eyes were bright and eager, and there was a strange, almost feral grin on her lips. She shouldered her bow and stood on her saddle even as her horse continued to sprint toward the now panicking soldiers. Then she drew a long knife from her belt and leapt toward the soldiers. Her horse veered to the side as she crashed headlong into the mass of armed men. The Ranger’s blade flickered here and there, drawing arcs of red as she hopped from one mounted soldier to the next. She stabbed some and slit the throats of others. Some were only wounded and fell from their horses to be trampled under the hooves of the frightened animals. The air was thick with blood and the screams of men in pain. Vadim squeezed his doll as hard as he could and kept his eyes shut tight, but he could not block out the piteous sounds of terrified agony.

And then everything went silent.

Vadim cautiously opened his eyes to see the Ranger grinning down at him.

“You hurt?” asked the Ranger.

Vadim shook his head with an uneven twitch.

“Great.” The Ranger crouched down beside him and reached out her hand.

Vadim flinched back. His mother had said that Strannik were fearsome beings who had been granted astonishing abilities by the dread Lady Marzanna, Goddess of Winter.

“I’m not going to hurt you.” She gently wiped the blood off his face with her gloved hand. “Looks like I got you a little messy. Sorry about that.”

Vadim stared at her. In all the stories he had ever heard, none of them had described a Ranger as nice. Was this a trick of some kind? An attempt to set Vadim at ease before doing something cruel? But the Ranger only stood back up and looked at the wagon, which was still attached to a pair of frightened, wild-eyed horses. The other horses had all scattered.

The Ranger gestured to the wagon filled with the tithes of other villages. “Anyway, I better get this stuff back where it came from.”

She looked down at the pile of bloody, uniformed bodies in the snow for a moment. “Tell your elder I’m sorry about the mess. But at least you get to keep all your food this year, right?”

She patted Vadim on the head, then sauntered over to her beautiful gray-and-black stallion, who waited patiently nearby. She tied her horse to the wagon, then climbed onto the seat and started back the way the soldiers had come.

Vadim watched until he could no longer see the Ranger’s wagon. Then he looked at all the dead men who lay at his feet. Now he knew there were worse things than imperial soldiers. Though he didn’t understand the reason, his whole body trembled, and he began to cry.

When he finally returned home, his eyes raw from tears, he told his mother what had happened. She said he had been blessed, but he did not feel blessed. Instead he felt as though he had been given a brief glimpse into the true nature of the world, and it was more frightening than he had ever imagined.

For the rest of his short life, Vadim would have nightmares of that Ranger of Marzanna. 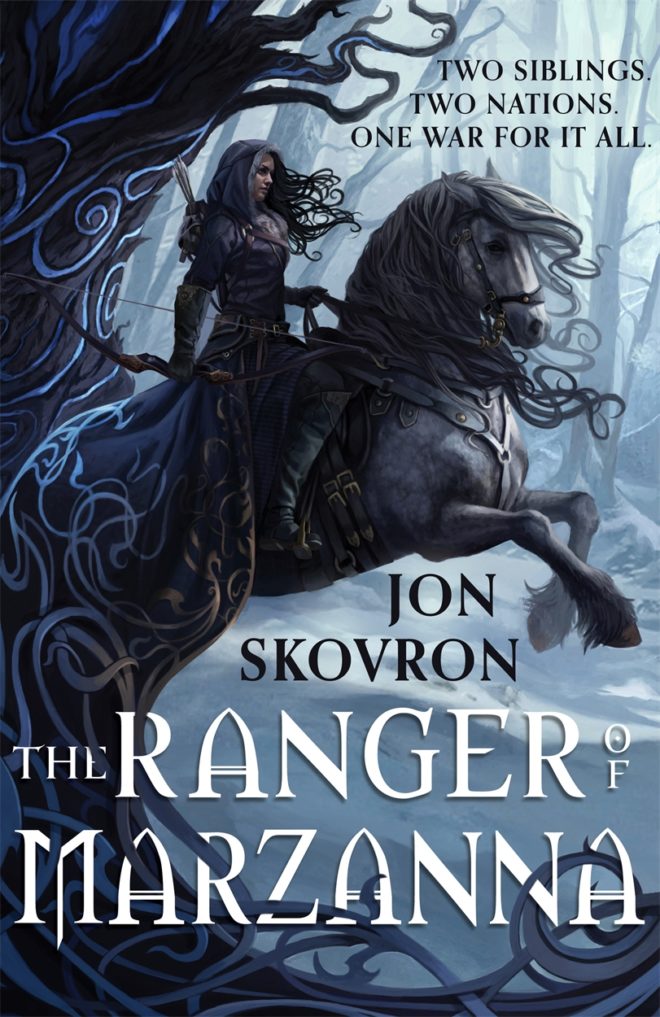 Jon Skovron is the author of Young Adult novels Struts & Frets, Misfit, Man Made Boy and This Broken Wondrous World from Viking Penguin. His short stories have appeared in publications such as ChiZine and Baen’s Universe, and more recently in anthologies like Defy the Dark from HarperCollins, and GRIM from Harlequin Teen. He lives just outside Washington DC with his two sons and two cats.

“Skovron launches his Slavic-influenced Goddess War series with this intricate, well-told fantasy . . . This is epic fantasy done right” Publishers Weekly on The Ranger of Marzanna

“The world-building is solid, the action is non-stop and Skovron’s overall character development is exceptional . . . An undeniable page-turner that will have readers salivating for the next volume of this projected trilogy” Kirkus on The Ranger of Marzanna

“A great swashbuckling adventure” Sun on Hope and Red

“Vivid and unpredictable” SciFiNow on Hope and Red