Sex and the City with monsters! Witty urban fantasy from fan favourite Mur Lafferty, about a travel writer finds she's agreed to write a guide to New York – for the undead! Read on for chapter one . . .

The bookstore was sandwiched between a dry cleaner’s and a shifty-looking accounting office. Mannegishi’s Tricks wasn’t in the guidebook, but Zoë Norris knew enough about guidebooks to know they often missed the best places.

This clearly was not one of those places.

The store was, to put it bluntly, filthy. It reminded Zoë of an abandoned mechanic’s garage, with grime and grease coating the walls and bookshelves. She pulled her arms in to avoid brushing against anything. Long strips of paint dotted with mold peeled away from the walls as if they could no longer stand to adhere to such filth. Zoë couldn’t blame them. She felt a bizarre desire to wave to them as they bobbed lazily to herald her passing. Her shoes stuck slightly to the floor, making her trek through the store louder than she would have liked.

She always enjoyed looking at cities—even her hometown—through the eyes of a tourist. She owned guidebooks of every city she had visited and used them extensively. It made her usual urban exploration feel more thorough.

It also allowed her to look at the competition, or it had when she’d worked in travel book publishing.

The store didn’t win her over with its stock, either. She’d never heard of most of the books; they had titles like How to Make Love, Marry, Devour, and Inherit in Eight Weeks in the Romance section and When Your Hound from Hell Outgrows His House—and Yours in the Pets section.

She picked the one about hounds and opened it to Chapter Four: “The Augean Stables: How to Pooper-Scoop Dung That Could Drown a Terrier.” She frowned. So, they’re really assuming your dog gets bigger than a house? It’s not tongue‑in‑cheek? If this is humor, it’s failing. Despite the humorous title, the front cover had a frightening drawing of a hulking white beast with red eyes. The cover was growing uncomfortably warm, and the leather had a sticky, alien feeling, not like cow or even snake leather. She switched the book to her left hand and wiped her right on her beige sweater. She immediately regretted it.

“One sweater ruined,” she muttered, looking at the grainy black smear. “What is this stuff?”

The cashier’s desk faced the door from the back of the store, and was staffed by an unsmiling teen girl in a dirty gray sundress. She had olive skin and big round eyes, and her head had the fuzz of the somewhat-recently shaved. Piercings dotted her face at her nose, eyebrow, lip, and cheek, and all the way up her ears. Despite her slouchy body language, she watched Zoë with a bright, sharp gaze that looked almost hungry.

Beside the desk was a bulletin board, blocked by a pudgy man hanging a flyer. He wore a T‑shirt and jeans and looked to be in his mid-thirties. He looked completely out of place in this store; that is, he was clean.

“Can I help you?” the girl asked as Zoë approached the counter.

“Uh, you have a very interesting shop here,” Zoë said, smiling. She put the hound book on the counter and tried not to grimace as it stuck to her hand briefly. “How much is this one?”

The clerk didn’t return her smile. “We cater to a specific clientele.”

“It’s not for sale. It’s a collectible.”

Zoë became aware of the man at the bulletin board turning and watching her. She began to sweat a little bit.

Jesus, calm down. Not everyone is out to get you.

“So it’s not for sale, or it’s a collectible. Which one?”

The girl reached over and took the book. “It’s not for sale to you, only to collectors.”

“How do you know I don’t collect dog books?” Zoë asked, bristling. “And what does it matter? All I wanted to know was how much it costs. Do you care where it goes as long as it’s paid for?”

“Are you a collector of rare books catering to the owners of . . . exotic pets?” the man interrupted, smiling. His voice was pleasant and mild, and she relaxed a little, despite his patronizing words. “Excuse me for butting in, but I know the owner of this shop and she considers these books her treasure. She is very particular about where they go when they leave her care.”

“Why should she . . .” Zoë trailed off when she got a closer look at the bulletin board to the man’s left. Several flyers stood out, many with phone numbers ripped from the bottom. One, advertising an exorcism service specializing in elemental demons, looked burned in a couple of places. The flyer that had caught her eye was pink, and the one the man had just secured with a thumbtack.

Pluses: Experience in writing, publishing, or editing (in
this life or any other), and knowledge of New York City.

Minuses: A life span shorter than an editorial cycle
(in this case, nine months).

“Oh, hell yes,” said Zoë, and with the weird, dirty hound book forgotten, she pulled a battered notebook from her satchel. She needed a job. She was refusing to adhere to the stereotype of running home to New York, admitting failure at her attempts to leave her hometown. Her goal was a simple office job. She wasn’t waiting for her big break on Broadway and looking to wait tables or take on a leaflet-passing, taco-suit-wearing street-nuisance job in the meantime.

As she scribbled down the information, the man looked her up and down and said, “Ah, I’m not sure if that’s a good idea for you to pursue.”

Zoë looked up sharply. “What are you talking about? First I can’t buy the book, now I can’t apply for a job? I know you guys have some sort of weird vibe going on, ‘We’re so goth and special, let’s freak out the normals.’ But for a business that caters to, you know, customers, you’re certainly not welcoming.”

“I just think that particular business may be looking for someone with experience you may not have,” he said, his voice level and diplomatic. He held his hands out, placating her.

“But you don’t even know me. You don’t know my qualifications. I just left Misconceptions Publishing in Raleigh. You heard of them?” She hated name-dropping her old employer—she would have preferred to forget it entirely—but the second-biggest travel book publisher in the USA was her strongest credential in the job hunt.

The man shifted his weight and touched his chin. “Really. What did you do for them?”

Zoë stood a little taller. “Head researcher and writer. I wrote most of Raleigh Misconceptions, and was picked to head the project Tallahassee Misconceptions.”

He smiled a bit. “Impressive. But you do know Tallahassee is south of North Carolina, right? You went in the wrong direction entirely.”

Zoë clenched her jaw. “I was laid off. It wasn’t due to job performance. I took my severance and came back home to the city.”

The man rubbed his smooth, pudgy cheek. “What happened to cause the layoff? I thought Misconceptions was doing well.”

Zoë felt her cheeks get hot. Her boss, Godfrey, had happened. Then Godfrey’s wife—whom he had failed to mention until Zoë was well and truly in “other woman” territory—had happened. She swallowed. “Economy. You know how it goes.”

He stepped back and leaned against the wall, clearly not minding the cracked and peeling paint that broke off and stuck to his shirt. “Those are good credentials. However, you’re still probably not what they’re looking for.”

Zoë looked at her notebook and continued writing. “Luckily it’s not your decision, is it?”

She groaned and looked back up at him. “All right. Who are you?”

He extended his hand. “Phillip Rand. Owner, president, and CEO of Underground Publishing.”

She looked at his hand for a moment and shook it, her small fingers briefly engulfed in his grip. It was a cool handshake, but strong.

“Zoë Norris. And why, Mr. Phillip Rand, will you not let me even apply?”

A vision of future months dressed as a dancing cell phone on the wintry streets pummeled Zoë’s psyche. She leaned forward in desperation. She was short, and used to looking up at people, but he was over six feet, and she was forced to crane her neck to look up at him. “Mr. Rand. How many other people experienced in researching and writing travel guides do you have with you?”

He considered for a moment. “With that specific qualification? I actually have none.”

“So if you have a full staff of people who fit into some kind of mystery mold, but don’t actually have experience writing travel books, how good do you think your books are going to be? You sound like you’re a kid trying to fill a club, not a working publishing company. You need a managing editor with experience to supervise your writers and researchers. I’m smart, hardworking, creative, and a hell of a lot of fun in the times I’m not blatantly begging for a job—obviously you’ll have to just take my word on that. I haven’t found a work environment I don’t fit in with. I don’t care if Underground Publishing is catering to eastern Europeans, or transsexuals, or Eskimos, or even Republicans. Just because I don’t fit in doesn’t mean I can’t be accepting as long as they accept me. Just give me a chance.”

Phillip Rand was unmoved. “Trust me. You would not fit in. You’re not our type.”

She finally deflated and sighed. “Isn’t this illegal?”

He actually had the audacity to laugh at that. “I’m not discriminating based on your gender or race or religion.”

“Then what are you basing it on?”

He licked his lips and looked at her again, studying her. “Call it a gut reaction.”

She deflated. “Oh well. It was worth a try. Have a good day.”

On her way out, she ran through her options: there were the few publishing companies she hadn’t yet applied to, the jobs that she had recently thought beneath her that she’d gladly take at this point. She paused a moment in the Self-Help section to see if anything there could help her better herself. She glanced at the covers for Reborn and Loving It, Second Life: Not Just on the Internet, and Get the Salary You Deserve! Negotiating Hell Notes in a Time of Economic Downturn. Nothing she could relate to, so she trudged out the door, contemplating a long bath when she got back to her apartment. Better than unpacking more boxes.

After the grimy door shut behind her, Zoë decided she had earned a tall caloric caffeine bomb to soothe her ego. She wasn’t sure what she’d done to deserve this, but it didn’t take much to make her leap for the comfort treats these days—which reminded her, she needed to recycle some wine bottles. 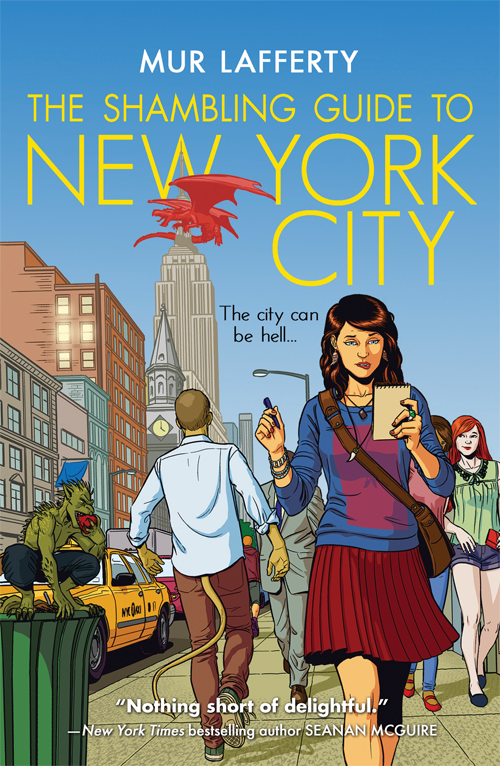 Mur Lafferty is a writer, podcast producer, gamer, geek and martial artist. She loves to run, practice kung fu (Northern Shaolin five animals style), play World of Warcraft and Dragon Age and hang out with her fabulous geeky husband and their eight-year-old daughter.

'Shows exactly why so many writers have been buzzing about Mur Lafferty for so many years: an unbeatable mixture of humor, heart, imagination, and characterization. I want to live in Mur's New York' Cory Doctorow