As I follow the large steps my father’s boots make in the snow, I revel in the solitude. This is why I cherish our morning walks. They give me time to talk to Tati, but also time to think. “In silence you can hear God,” Tati says to me as we walk. But I don’t hear God in the silence—I hear myself. I come here to get away from the noises of the town and the chatter of the townsfolk. It’s where I can be fully me.

“What does God sound like?” I ask him. When I walk with Tati, I feel like I’m supposed to think about important things, like prayer and faith.

“Sometimes the voice of God is referred to as a bat kol,” he says. I translate the Hebrew out loud: “The daughter of a voice? That doesn’t make any sense.”

He chuckles. “Some say that bat kol means an echo, but others say it means a hum or a reverberation, something you sense in the air that’s caused by the motion of the universe—part of the human voice, but also part of every other sound in the world, even the sounds that our ears can’t hear. It means that sometimes even the smallest voice can have a big opinion.” He grins, and I know that he means me, his daughter; that my opinion matters. I wish it were true. Not everybody in our town sees things the way my father does. Most women and girls do not study Torah; they don’t learn or ask questions like I do. For the most part, our voices don’t matter. I know I’m lucky that Tati is my father.

Although I love Tati’s stories and his answers, I wonder why a small voice is a daughter’s voice. Sometimes I wish my voice could be loud—like a roar. But that is not a modest way to think. The older I get, the more immodest my thoughts become.

I feel my cheeks flush as my mind wanders to all the things I shouldn’t be thinking about—what it would feel like to hold the hand of a man, what it might feel like to kiss someone, what it’s like when you finally find the man you’re meant to marry and you get to be alone together, in bed . . . I swallow and shake my head to clear my thoughts.

If I shared the fact that this is all I think about lately, Mami and Tati would say it means it’s time for me to get married. But I’m not sure I want to get married yet. I want to marry for love, not convenience. These thoughts feel like sacrilege. I know that I will marry a man my father chooses. That’s the way it’s done in our town and among Tati’s people. Mami and Tati married for love, and it has not been an easy path for them.

I take a deep breath and shake my head from all my thoughts. This morning, everything looks clean from the snow that fell last night and I imagine the icy frost coating the insides of my lungs and mind, making my thoughts white and pure. I love being outside in our forest more than anything at times like these, because the white feels like it hides all our flaws.

Perhaps that’s why I often see Tati in the dark forest that surrounds our home praying to God or—as he would say—the Ribbono Shel Oylam, the Master of the Universe, by himself, eyes shut, arms outstretched to the sky. Maybe he comes out here to feel new again too.

Tati comes from the town of Kupel, a few days’ walk from here. He came here and joined a small group of Chassidim in the town—the followers of the late Reb Mendele, who was a disciple of the great and holy Ba’al Shem Tov. There is a small shtiebl where the men pray, in what used to be the home of Urka the Coachman. It is said that the Ba’al Shem Tov himself used to sit under the tree in Urka’s courtyard. The Chassidim here accepted my father with open arms, but nobody accepted my mother.

Sometimes I wonder if Reb Mendele and the Ba’al Shem Tov (zichrono livracha) were still with us, would the community treat Mami differently? Would they see how hard she tries to be a good Jew, and how wrong the other Jews in town are for not treating her with love and respect. It makes me angry how quickly rumors spread, that Mami’s kitchen isn’t kosher (it is!) just because she doesn’t cover her hair like the other married Jewish women in our town.

That’s why Tati built our home, sturdy and warm like he is, outside our town in the forest. It’s what Mami wanted: not to be under constant scrutiny, and to have plenty of room to plant fruit trees and make honey and keep chickens and goats. We have a small barn with a cow and a goat, and a bee glade out back and an orchard that leads all the way down to the river. Tati works in town as a builder and a laborer in the fields. But he is also a scholar, worthy of the title Rebbe, though none of the men in town call him that.

Sometimes I think my father knows more than the other Chassidim in our town, even more than Rabbi Borowitz who leads our tiny kehilla, and the bare bones prayer minyan of ten men that Tati sometimes helps complete. There are many things my father likes to keep secret, like his morning dips in the Dniester River that I never see, but know about, his prayer at the graveside of Reb Mendele, and our library. Our walls are covered in holy books—his sforim, and I often fall asleep to the sound of him reading from the Talmud, the Midrash, and the many mystical books of the Chassidim. The stories he reads sound like fairy tales to me, about magical places like Babel and Jerusalem.

In these places, there are scholarly men. Father would be respected there, a king among men. And there are learned boys of marriageable age—the kind of boys Tati would like me to marry someday. In my daydreams, they line up at the door, waiting to get a glimpse of me—the learned, pious daughter of the Rebbe. And my Tati would only pick the wisest and kindest for me.

I shake my head. In my heart of hearts, that’s not really what I want. When Laya and I sleep in our loft, I look out the skylight above our heads and pretend that someone will someday find his way to our cabin, climb up onto the roof, and look in from above. He will see me and fall instantly in love.

Because lately I feel like time is running out. The older I get, the harder it will be to find someone. And when I think about that, I wonder why Tati insists that Laya and I wait until we are at least eighteen.

I would ask Mami, but she isn’t a scholar like Tati, and she doesn’t like to talk about these things. She worries about what people say and how they see us. It makes her angry, but she wrings dough instead of her hands. Tati says her hands are baker’s hands, that she makes magic with dough. Mami can make something out of nothing. She makes cheese and gathers honey; she mixes bits of bark and roots and leaves for tea. She bakes the tastiest challahs and cakes, rugelach and mandelbrot, but it’s her babka she’s famous for. She sells her baked goods in town.

When she’s not in the kitchen, Mami likes to go out through the skylight above our bed and onto the little deck on our roof to soak up the sun. Laya likes to sit up there with her. From the roof, you can see down to the village and the forest all around. I wonder if it’s not just the sun that Mami seeks up there. While Tati’s head is always in a book, Mami’s eyes are always looking at the sky. Laya says she dreams of somewhere other than here. Somewhere far away, like America. 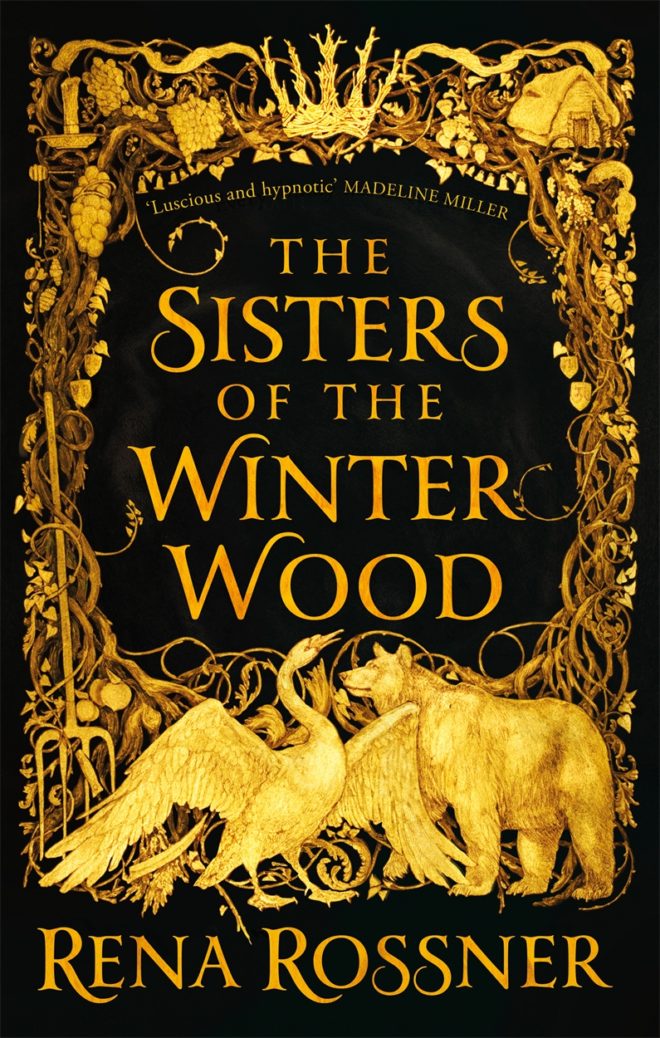 Rena Rossner lives in Israel, where she works as a literary agent. She is the graduate of the Johns Hopkins University’s Writing Seminars program and McGill University, where she studied history. All eight of her great-grandparents immigrated to America to escape the pogroms from towns like Dubossary, Kupel, Riga, and Bender. It is their story, together with her love of Jewish mythology and fantasy, that inspired her to write The Sisters of the Winter Wood.

“The Sisters of the Winter Wood mixes fairy tale, poetry, history, and heart to create an enchanting and mesmerizing tale of sisterly love. I adored this book!” Sarah Beth Durst, award-winning author of the Queens of Renthia series

“Rossner weaves an elegant tapestry of the love between sisters, the value of faith and family, and knowing one’s true friends in times of peril” J. Kathleen Cheney

“A graceful, poetic, deeply moving novel. Its characters are fantastical and yet essentially human, bound by ambition and desire, fear and prejudice, but above all, love in all its forms . . . Simply gorgeous book in every sense” Louisa Morgan, author of A Secret History of Witches

“This dark fairy tale about sisterly love and Jewish strength and courage, set against the backdrop of a deep and deadly winter forest, will haunt me for a long time. A powerful, emotional debut” Julie C. Dao, author of Forest of a Thousand Lanterns