The second volume in the God-King Chronicles, The Splinter King is the sequel to The Black Coast, and tells an epic fantasy tale of gods and thieves, of kings and assassins, of dragons and the warriors who ride them into battle . . .

Thane Caziel Rumedell watched the strange procession wend its way up the valley towards him. Rumours had reached him of the rebirth of the Divine Nari: confused and jumbled rumours, each one seeming to give a different location for the God-King’s discovery. Many of Caziel’s fellow Westland thanes were gullible fools, who would all too easily accept such a claim. So far as Caziel was concerned, the rightful monarch of Narida was the one sitting on the Sun Throne in Idramar. It was inconceivable that Natan III’s divine ancestor could have been reborn without the current God-King knowing of it.

“There are more of them than we were led to believe, lord,” Sar Disman said from beside him. Caziel glanced sideways, but his armsman was sat on his dragon and facing straight ahead, giving no indication of the alarm that his words might have conveyed had they not been delivered in a neutral tone.

“The lowborn ever did cleave to foolishness,” Sar Barlam said stoutly. He came from a long line of warriors, who had served the Rumedell family for as far back as anyone could remember. His lineage was only noble in the loosest sense, but he still had strict views on what separated him from the general populace of Narida: in the main, the lack of intelligence of the masses.

“Do you intend to hold the road against them, lord?” Disman asked, ignoring his fellow sar’s comment.

“This thane cannot allow such blasphemy to pass through his lands,” Caziel declared. “To do such a thing would be akin to joining our blades to this pretender’s cause.”

Disman turned his head to look behind them. “The sar fears the men we have with us will not prove sufficient to the task, should these pilgrims choose to press the matter.” They had a hasty muster of two dozen, mainly Caziel’s household guards and a few men of fighting condition from his lands. He could have roused far more in the event of a war, of course, but he had wanted to move quickly, and had not anticipated that the heretics’ numbers would have grown by so many since he had received word of their approach. There had to be a couple of hundred at least on the road.

“There are the three of us, all mounted on dragons, and two dozen well-equipped soldiers,” Caziel said calmly. “This rabble have as many old people and children as they do hale adults, and the dragons with them are beasts of burden or wagon haulers, not war mounts like Varrayne.” He slapped his dragon’s neck, and it responded with a snort. “In any case, we are defending the honour of the rightful ruler of Narida, and his divine ancestor will look upon us with favour.”

“This sar would prefer if He were to look upon us with twenty archers,” Disman muttered.

The first of the pilgrims were now approaching the mile marker that served as the boundary between Rumedell and Broadfield, the thanedom through which they had been travelling. Caziel was surprised that Thane Badan had allowed them to pass unchallenged, but he was getting old now, and his sons were far from dutiful.

Caziel drew a long, broad-bladed spear from his saddle rack, and levelled it at the man in the lead: a tall fellow in a robe and a cloak, with a head that had clearly been shaved clear of hair before its time, and with a pipe that gave off a few wisps of smoke clenched between his teeth. “Halt!”

The man walked on for a few more steps before deigning to oblige, coming to rest with his feet apart some ten yards away. His companions slowed as well, and none moved past him. Unsurprising, Caziel thought. Who would wish to face the wrath of a mounted thane of Narida?

“Who are you, who seek to bar the way of the Divine One?” the bald man called around the stem of his pipe. “Or do you not yet know what transgression you commit?”

Caziel’s temper flared at the man’s sheer effrontery. “The Divine One passed from this world centuries ago, and his descendant sits on the Sun Throne! Your heresy will not be tolerated on these lands, wretch! Return the way you have come, and you may keep your lives in the hope that you will renounce this foolishness! Take another step, and this thane will strike you down!”

The bald man removed his pipe from his mouth and, with a sigh of regret, knocked it out on his boot. He then pulled back his cloak to place it in a pocket of his robe, and Caziel saw a scabbarded sword belted at his waist. And not just any sword.

“Whose longblade do you carry?” Sar Barlam demanded angrily. It was indeed a longblade, the weapon of a sar; a far finer blade than the simple triangular sword that might be carried as a sidearm by a spearman. Caziel had one at his own belt, along with its companion shortblade, both scabbards decorated with artwork depicting his battles and triumphs.

Caziel studied the man anew, with not a little disdain. Priests were all well and good, of course, but to renounce your vows as a sar to become one? And in service to a pretender at that? It did not bear thinking about.

“Regardless of your history, you may not pass,” he said clearly. “Shepherd your charges away, or face the consequences.”

Mordokel placed his hands on his blade – one on the hilt, the other on the scabbard – and dropped into a slight crouch. His form was good, Caziel noted; it seemed likely that his account of his past was truthful, strange though it was.

“You are not accepting the thane’s gracious offer?” Sar Barlam asked, readying his own spear.

“This priest cannot,” Mordokel said levelly. “The Divine One has instructed us to take this route, and so we shall. You may swear yourselves to His service now, and join us. Otherwise, your bodies will be left on this hillside for the scavengers.”

The priest’s eyes were hard, with no suggestion of doubt or fear. Caziel had to give the man credit for that, at least.

“This thane does not wish to draw his blade on fellow Naridans,” he said, hoping that sense might yet prevail.

“This priest has no such compunctions, should his fellow Naridans stand against the Divine One’s wishes,” Mordokel replied flatly.

“So be it,” Caziel said with regret. He raised his spear and drew in breath to shout the order to attack.

The priest drew his blade in a swift, sharp motion that had clearly been performed thousands of times before, and broke into a dead run. His immediate companions came with him, producing their own weapons from under their cloaks, and behind them the snake’s body of the pilgrimage began to lurch after them. Caziel was so taken aback by people on foot charging towards mounted sars that he hesitated for a moment before applying his heels to Varrayne’s flanks, and by the time he did so the onrushing attackers were too close for his mount to build up the devastating momentum that was the reason mounted sars could hammer through foot troops.

Then he was in and among them, stabbing downwards with his spear, and there was no time for thought.

The dirt of the road was warmed by the sun, and the sun itself was beating down with the vigour of late spring, but Caziel Rumedell was cold. He still fought to rise, to take his longblade back into his hands and fight, but to no avail. His body was not responding. He had already been cut down: he just was not dead yet. It was coming, though; the edges of his vision were darkening.

Footsteps approached, moving in the opposite direction to the rest of the faithless heretics traipsing past him without a glance down at thane of the lands into which they were moving. A pair of well-worn but well-made boots came into his view, and the toe of one reached out to tilt his face sideways, to look up at the sky.

A man stood over him, silhouetted. Caziel couldn’t make out the face, but the way the sun gleamed off the bald pate gave him all the clue he needed.

“Mordokel,” he whispered, unable to summon any more volume or venom.

“Three of your men saw sense, and their lives have been spared,” the priest declared, in a tone as neutral as if he were discussing the weather. “One, in fact, has been healed of his wounds by the Divine One Himself. The rest of you will, as this priest promised, be left for the scavengers.”

“Shortblade,” Caziel hissed. “Let this thane . . . take his life . . . ” He had failed in his duty; at the least, he could die by his own hand rather than this extended death. But his shortblade was no longer on his belt, and his longblade was nowhere in his sight.

Mordokel shook his head. “Your options were made clear to you, and you made your choice. You died opposing the Divine One’s will: anything else is an inconsequential detail.”

Mordokel knelt down, bringing his face closer. Now Caziel could just make out some of his features, even through the darkness cast by the sun and his own failing vision. The priest’s eyes were, if anything, even harder than when he led the charge.

“The Code of Honour no longer holds any weight,” he said simply. “The Divine One is reborn, and all of our old structures can be cast aside.” He tutted. “The world you knew has gone, thane. It will be changed beyond your recognition. Perhaps this is indeed the most merciful end for you. Die here in the dust, thinking of the Narida you love, and take some comfort from that fact that since you could not accept the truth, at least you will not see what it does.” He stood up, becoming lost in shadow once more, and turned away.

“Mordokel!” Caziel spluttered. “Mordokel!” He no longer knew if it was a curse or an entreaty, but it mattered not. The priest neither slowed nor looked back, and the daylight faded on Caziel, accompanied by the tread of feet and the creak of wagon wheels. 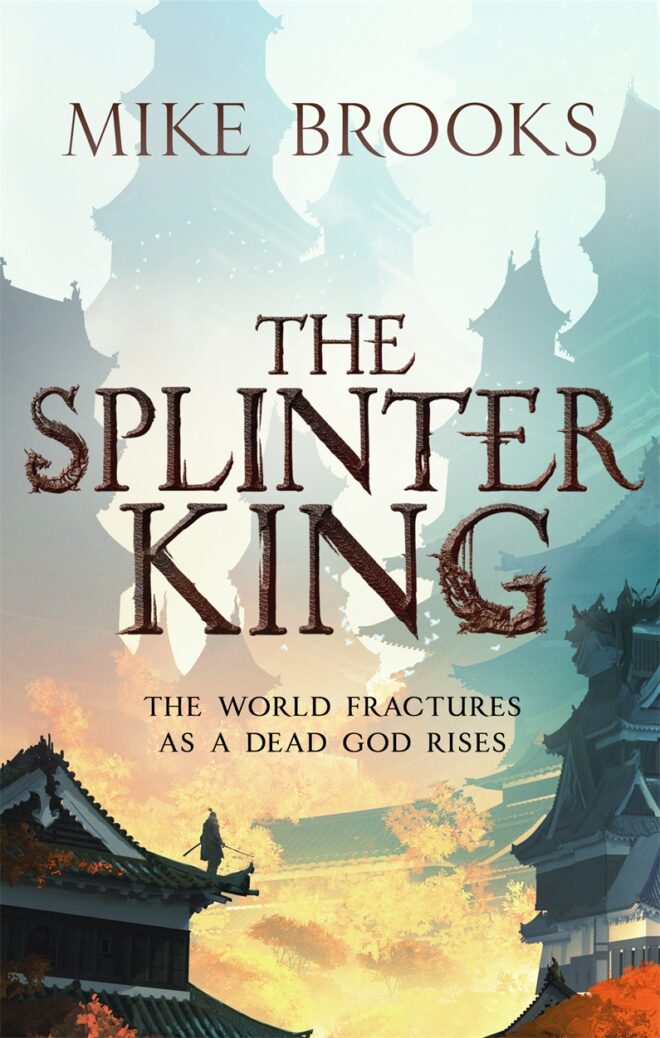 Mike Brooks was born in Ipswich, Suffolk and now lives in Nottingham with his wife, cats, snakes and a collection of tropical fish. He worked for a homelessness charity for over fifteen years, before deciding that he preferred making up stories for a living. When not writing, he plays guitar with his punk band and DJs wherever anyone will tolerate him. He is the author of three science fiction novels, Dark Run, Dark Sky and Dark Deeds and various works for Games Workshop’s Black Library.

“Addictive” The Verge on the Keiko series

“The bonds among the crew continue to be a high point of the writing, as are Brooks’s terrific action sequences” Publishers Weekly (starred review) on the Keiko series