The first volume of a sweeping and ingeniously plotted epic fantasy from the World Fantasy Award-winning author K. J. Parker and his most ambitious work to date. This is a story of a war on a grand scale, told through the eyes of soldiers, politicians, victims and heroes.

The Rules of the Game

Director Procopius of the Imperial Academy of Music and Performing Arts came by the scar when he was eighteen months old, on the day when his father, in a drunken rage, stabbed his mother sixteen times before turning the knife on his baby son and then himself. The scar, an inch wide, ran from his left eye to the right corner of his mouth, and he knew that for as long as he lived, regardless of what he achieved (and he had already achieved so much), it would always be the first thing people noticed about him and their most abiding impression. He knew that they would burn with curiosity to know how he’d got it, and would be far too polite or embarrassed to ask.

Just before the battle, General Moisa gave orders to strike camp, form columns and retreat. Immediately one of his junior officers stormed into his tent, forcing his way past the sentries. He was a good-looking young man with curly blond hair, rather a round face; stocky build, medium height. “Permission to speak freely,” he said. His name was Senza Belot.

Moisa was putting his maps back in their case. He was a tidy man, who took care of his possessions. “Well?”

“With all due respect,” Senza said, “are you out of your mind? Sir?” he added quickly. “We’ve got them pinned down, we’re between them and the road, it’s flat as a chessboard and they’ll have the sun in their eyes. And you want to run away.”

Moisa looked at him. He liked Senza. “We’re outnumbered three to one,” he said.

“Exactly,” Senza replied. “There’s a lot of them. Far too many. Unless they get control of the road, they’ll have run out of food by this time tomorrow. They’re desperate. We can slaughter them.”

Moisa nodded, as though this was an exam and Senza had scored full marks. “We don’t have any arrows,” he said.

Senza had opened his mouth to make his next point. He stood there with it open for a couple of heartbeats. Then he said, “What?”

Moisa took out one of the maps, unrolled it carefully and weighted down the corners with four pebbles from the jar of corner-weighting-down pebbles he always had by him. “There.” He prodded the map with a sausage- ike finger. “Ten carts, a hundred thousand arrows, supposed to be here at first light today. Got washed away by a flash flood crossing the Euryphiale.” He lifted two pebbles and let the map roll itself up again. “No arrows, no battle. Bloody shame, but there it is.”

Senza looked at him, like an idiot staring straight into the sun. “Is that all?” he said.

Then came the first recorded instance of the Senza Far-Away Look, so familiar nowadays to audiences of cheap novels and market-square melodramas. Moisa later said he rolled his eyes, which isn’t quite how the Look is portrayed in the classical tradition. “Permission to do something about it. Sir.”

Senza’s elder brother Forza was reckoned to be the most promising soldier of his generation, already in command of a battalion at the age of twenty-one. It was a shame he was on the other side. “All right,” Moisa said. “Talk to me.”

Shortly after that, the retreat was called off, the army assumed the standard chest-and-horns formation against the enemy front, and six hundred of the elite Seventh heavy infantry advanced in a long double line, followed by two pike regiments in squares of five hundred, preceded by thirty of the great pavises that Moisa had prepared for the siege of Thrassa. The pavises were big shields, made of ox hides stitched together, about the size of a warship’s sail, hung on square wooden frames and mounted on carts. They headed straight for the centre of the enemy line, which was mostly made up of archers covered by triangles of light infantry.

“He’s going to try and punch through,” said the enemy general (his name is not recorded). “He must be mad.”

His aide, Colonel Forza Belot, grinned. “He hasn’t got any arrows,” he said.

The general frowned. “That’s interesting,” he said. “How did you know that?”

“Little bird told me. They all got washed away crossing some river. So, he’s got two choices, go home or try and smash through. He can’t break our heavy infantry, so he’s going for the soft middle.” He shrugged. “It’s what I’d do, if I was desperate.”

“We’ve got ten thousand archers in there,” the general said. “It’s crazy.”

“Yes,” Forza replied. “Sometimes you have to be.”

The line advanced, the sails of the pavises billowing in the strong tailwind, until they came into medium range of the Western archers. “Well?” the general asked.

The archers loosed. They were levies from the northern hill country, trained from childhood to shoot fast and far. They let go twenty volleys in just over two minutes. The six hundred men-at-arms in the front two ranks were wiped out. The advance stopped dead and immediately withdrew, taking long- distance fire until they were out of range. The general, watching from the hilltop, grinned and turned to Colonel Forza. “Well,” he said. “That’s that.”

The Easterners completed their withdrawal, and the front ranks parted to let them through. The pikemen resumed their positions in the line, but the pavise carts passed on to the rear, where Moisa and the archers were waiting.

The archers scrambled up on to the carts and started pulling arrows out of the pavises. “Twenty volleys,” Senza went on, “ten thousand archers, that’s two hundred and forty thousand arrows. Say eighty thousand misses, five thousand hits on the Seventh, that’s still—”

Moisa nodded. “Enough,” he said. Then he added, “You didn’t tell me about the Seventh.”

Senza shrugged. “They had to have something to shoot at,” he said, “and we don’t need those men today. What we need is arrows, not heavy infantry.” He smiled. “Plenty more where they came from.”

Moisa now had enough arrows for ten volleys. In the event it only took him seven to win the battle, but he was unable to press home his advantage, mostly because of an inspired rearguard action by the Western Nineteenth Foot, under Colonel Forza Belot. The Westerners then cut across the marshes to reach the road, where they met their supply train. A week later, the situation was more or less exactly how it had been at the start of the campaign.

Six months later, the newly commissioned Colonel Senza Belot of the Eastern Fifth attended a reception at the Winter Palace, where he found himself talking to the widow of an officer of the Seventh. She gave him a polite smile over the rim of her wine glass and said, “I think you’re the man who sent my husband to his death.”

Senza put his glass down. “Permission to speak freely.”

“Yes, why not? I’d be interested to hear what you’ve got to say to me.”

Senza took a moment. “When I barged into Moisa’s tent,” he said, “I had maybe three seconds to get his attention and sell him on a plan of action. In those three seconds I considered two options. One was to take our best men, the Seventh, your husband’s unit, loop round a long way to the west into some dead ground I’d spotted, sneak up on the enemy baggage train and try and drive off a dozen or so carts full of arrows. It was a reasonable plan, I think. I’d had my eye on those arrow carts for about a week, on and off, while we were playing footsie with the Westerners up and down the Belsire river. I knew they’d be out back of the camp, and that their general probably hadn’t figured out about the blind spot. But to get there without being seen would’ve taken an hour, during which time our army would’ve been standing about doing nothing, which would’ve looked very odd, which could’ve put the other side on notice we were planning some sort of prank. Also, if it had all gone wrong we’d have got a good smacking and no arrows; even if it all went just right, I’d have had to leave the Seventh behind to hold off pursuit while we got the arrows safely back to our lines, and they’d have been slaughtered by the Western lancers. The other alternative, which is what I actually did, was pretty well foolproof, and we were pulling arrows out of the pavises three quarters of an hour after it all started. Your husband would’ve died either way. He could have died fighting bravely against overwhelming odds, to give Moisa the seven shots he needed to win the day. As it was, he walked straight into an arrow storm and probably had no idea what hit him. That’s really all there is to it.”

The widow looked at him for a moment. “You thought all that in three seconds.”

“That and other things. I’ve only told you the relevant bits.”

She fidgeted with her glass. “But it all came to nothing anyway,” she said. “There was a stalemate before the battle; there’s the same stalemate now. Nothing’s changed at all, except that a lot of men were killed, and you got your promotion.”

“Yes,” Senza said. “But at the moment, my job’s winning battles, not winning wars. If I’d been in Moisa’s shoes, I’d have done what I originally intended, turned round and gone home. Really, he should’ve known better than to listen to me.”

“I see,” the widow said. “Thank you. Tell me, is there anything you care about other than your own career?”

“I want to find my brother Forza and cut his throat,” Senza said. “Now, please excuse me, there’s someone over there I need to talk to.” 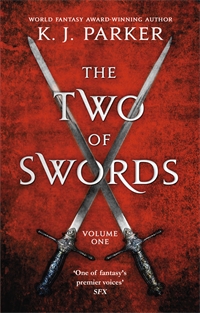 K. J. Parker is a pseudonym for Tom Holt. He was born in London in 1961. At Oxford he studied bar billiards, ancient Greek agriculture and the care and feeding of small, temperamental Japanese motorcycle engines. These interests led him, perhaps inevitably, to qualify as a solicitor and emigrate to Somerset, where he specialised in death and taxes for seven years before going straight in 1995. He lives in Chard, Somerset, with his wife and daughter.

“One of fantasy’s premier voices” SFX

“Assassins, emperors, generals, rogues, farmboys-turned-hero – all the trappings of epic fantasy . . . [and] all the complexity you could ever desire” Pornokitsch

“Skilful plotting and rich scene-setting” Guardian on The Company

“An intriguing tale of magic, manipulation and revenge . . . An action-packed adventure” Starburst on the Fencer trilogy