Mainstream crossover fiction for fans of Matt Haig, Gail Honeyman and Rowan Coleman, from the author of Everything About You – what if your life had an ‘undo’ button?

I picked up where Mum had left off, rasping out an abrasive rhythm with the sandpaper block as my arm glided back and forth. An aroma of wood began to creep out from beneath the paint dust and I stopped, letting the shower of particles drift earthwards. Flecks of white dotted my navy-blue sleeve, a whole nebula of them. Right here on my jumper, I’d collected a galaxy of stars too numerous to count. I took a deep breath and blew them all away.

At this height, the roof was so close you could pick the moss from between its tiles. Although I was going through the motions of sanding, it was really about getting caught when Mum re-emerged through the back door, the gratification of hearing her panicked cry:

‘What?’ I exclaimed, in feigned innocence.

Once I was on solid ground, her anger-fright softened. She assured me that I was more than capable of smoothing and painting the entire fascia by myself, but also very good at holding the ladder. Taking my head in both hands, Mum peered into my eyes, making me blink.

‘I can’t see anything,’ she said, letting go, ‘but don’t try that again without goggles. Your eyes are important.’

Once she had ascertained that no paint was threatening my corneas, she planted me firmly on the patio and clambered back up the ladder herself. Since builders were so expensive, she had taught herself household maintenance using manuals found in charity shops, struggling to understand the diagrams but sticking at it. DIY was not my favourite activity, but it did come with the most treats: already we’d had a second breakfast of pain au chocolat, and there was a packet of Rolos with my name on it.

I gripped the smooth sides of the ladder and winced at the music. As we were proper builders, we had the radio on an eighties station at full blast, and Mum’s breathy tones were just audible singing ‘Lucky, lucky, lucky’ in time to the rasp of the sandpaper. I hoped Rob was not in his garden thinking this was my music. He was a year older than me, and ever since he’d moved in I’d been determined to hang out with him. The previous day I’d been upstaged by his neighbour on the other side, a grungy, annoying boy called Tristan, who had flaunted his new CD player, complete with Oasis album, and had shown off a bronze, speckled frog he’d caught in a bucket.

Who’d have thought someone as cool as Rob would care about a frog? But he was more into animals than I’d anticipated. Tristan reeled off a few facts about tadpoles, suddenly the expert, as the amphibian crouched wetly in my new neighbour’s hand, and all I could do was slouch off home and kick at the hydrangeas, wondering if there was any novelty value in the fat, orange-edged slugs that patrolled our borders.

My eyes strayed again to the clustering blue flowers and the damp soil beneath. Holding a ladder, it occurred to me, is the most pointless task. The ladder isn’t going anywhere. If anything, it was supporting me. I was leaning against it. Would the weight of a thirteen-year-old really make any difference?

The words fell, warm and familiar, as from a hot tap. The sun came out, and I glowed with happiness. A whole summer ahead, and mostly without my sister Erin. Being a tremendous egghead, she was off on some gifted student programme, a precursor to her degree. I was officially man of the house.

The idea that I was also a bit of a mummy’s boy is not one that would have occurred to me at the time, though I certainly knew how to gain her approval, how to use my winning smile to best advantage. As my dad would have said, had he seen us even once during those years, ‘Never neglect your fans.’

I looked up towards Mum’s paint-splattered jeans and the basket of sandpaper hooked over the ladder, but a cascade of dust made me return my gaze to the flower beds and the neighbour’s wire partition, where neither side had replaced a missing fence. Although it was only August, plants were sprawling drunkenly under the weight of their own growth, going brown underneath. There was moisture in the air, muscular sunshine with the threat of rain. The Victoria plum buzzed with wasps, burdened with green-purple fruit. I saw something move amid the weeds, not the rustle of a bird but a purposeful glide. It took a minute to realise I was watching a coil ooze around a stem, tapering into a tail, its flesh black and glistening.

‘Darling’ – her tone was half-laughing, full of affectionate disbelief – ‘are you sure? They’re practically endangered.’

She turned back to the eaves.

‘There’s one here.’ True to form, it was moving slowly, cutting a neat undulation through the violets, towards the gap in the fence. If I didn’t act fast it would belong to the family next door. There was a big plaster tub discarded on the lawn. It would take only a second to trap it, and then I’d have my own slow-worm. Already I could see myself unveiling the bucket to show Rob, while Tristan looked on in mute defeat.

The wood grew hot under my hands. Mum was singing again, tapping the block as she reached for the next section, shaving off snowflakes which fell into my hair. I didn’t dare take my eyes from the creature. I was willing it to stay put, ready to shout at Mum to come down. It remained shining like oil, giving me hope that it was basking in the sun and in no hurry. Then, the moment I blinked, it started to move. An agony swept through me, and I clutched the wood so hard my fingers hurt, some swirl of underthought gathering imperceptibly. Finally I yelled, ‘Just one sec,’ and dashed over to the bucket, slipping on wet grass, and dived into the border. While I was still airborne, the slow-worm shot away, so fast I couldn’t quite believe it. My hands thrust down among the leaves, filling my fingernails with dirt. It had vanished.

‘Yeah,’ I called back on autopilot, hearing both Mum’s words and mine as though there was a time delay. When I turned, she was reaching across to the right. The ladder went to the left. I saw one wooden foot leave the ground, as the imbalance went beyond the point of correction. It was like watching a film, something that couldn’t be true.

There was bewilderment in my mum’s cry, as she realised she was going to fall. Her left hand scrabbled at the edge of the tiles, the other dropping the block and reaching for a piece of drainpipe – far too slowly, it seemed to me, as though it wasn’t remotely urgent – plucking at the plastic before letting it slip through her fingers. She plummeted, still clutching one tile she’d pulled from the roof, like a dentist who’d extracted a brownish incisor. The tile shattered on the patio.

I was still holding the bucket, my insides solidified with horror. My mother groaned. I ran over. There was no blood. She looked more dazed than hurt; she was trying to roll over. ‘Get an ambulance,’ she said. I took more precious seconds to digest her words, and I think I even asked, ‘Are you okay?’

No need to dwell on that scene longer than necessary. The ambulance was slow coming. At the hospital, I watched the nurse lift a chunky receiver to dial my nan, before repeating the process to call the switchboard at Erin’s summer school. She gave up trying to get any coherent information from me on the whereabouts of my estranged father. It’s all there in little crystallised sensations: greasy magazines in the waiting room, medical people coming in to ask me questions, and the brief mortification of trying to use the water cooler and yanking out the whole stack of cups. These memories can remain a snowstorm, a blizzard, like the white paint still caught in my hair. There is no need to examine every single flake.

My sister arrived, hours later, hardly believing she’d been called home. She asked me what happened, even though I heard the nurse telling her. I stayed quiet, hoping the guilty heat was not reddening my cheeks. Erin soon started crying.

‘Stupid Mum,’ she said. I was angry at her for that, but didn’t trust myself to speak. Instead I pretended to sip my cup of ice-cold water, and tried to stop hearing the sound of a tile smashing on concrete.

They let me see her, much later, lying in a bed that smelled of our drawer of plasters and bandages at home. It seemed like a trick, as though she was in fancy dress, or playing a role on stage, only there was no audience but me, and the other cast members were machines and bags of fluids. With great liberty, the nurses touched my shoulder whenever they spoke to me, while I sat in the chair and bit any parts of my thumbnail that had dared to grow beyond the quick. It didn’t matter what their expressions said, or how quietly they murmured. I would stay with her until she was well enough to come home, and that was that. 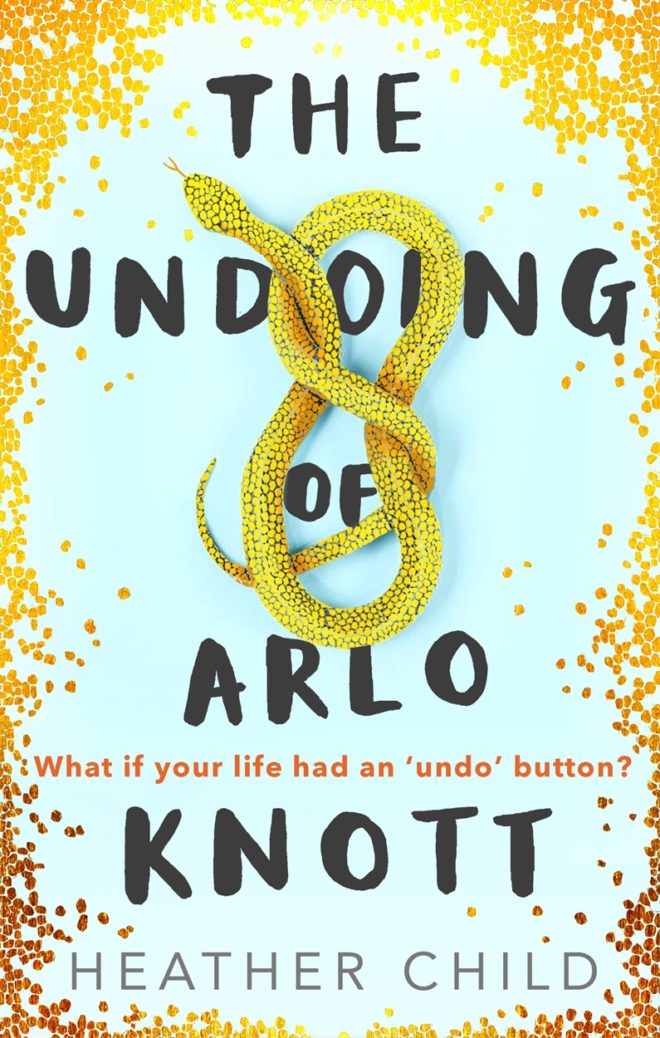 Heather Child’s experience in digital marketing has brought her into close contact with the automation and personalisation technologies that herald the ‘big data’ age. She lives in Bristol and Everything About You is her debut novel.

‘A captivating and assured first novel’ Guardian on Everything About You

‘Amazing, creepy, twisty and clever’ Karen Dionne on Everything About You

‘Black Mirror meets Gone Girl‘ Rosamund Lupton, Richard and Judy and Sunday Times bestseller on Everything About You

‘A compelling, terrifying and stunningly assured debut’ Gareth L. Powell on Everything About You