Violence and death come to the land under the Northern Sky when two fierce races break their age-old fragile peace and start an all-out war in this thrilling and savagely visceral epic fantasy.

It rained as though the world was ending. In a cobbled street made dark by the clouds that covered moon and stars, a hooded figure struggled towards the door of a stone house, dragged back by a bitter wind. The figure leaned forward against the rushing dark, one hand grasping the top of its hood as the wind threatened to unmask it. The roof of the house ahead was unravelling and the air was thick with swirling reed. So great was the pressure the wind exerted on the dwelling that, when the figure reached it and lifted the latch, the door swept inwards and rattled off the stone behind. Within, the darkness was complete. No candles burned, no lamps were lit and there was no natural light on this wild night. Water was pouring somewhere in the dark.

The figure hesitated on the threshold for a moment, casting around. Then it groped inside, forcing the door shut behind. The wind stopped roaring and began to moan instead as it was banished from the room. In the pitch-darkness, the figure lowered its hood.

Footsteps were ringing through the dark.

The figure stood still as light began to erode a corner of the blackness. Into this growing pool of light strode a tall, dark-haired man; his fine features illuminated by a candle which he clutched in a pewter holder. There was a touch of grey at his temples and his eyes were narrowed. He stopped dead at the sight of the figure by the door and dropped his hand to a long dagger at his belt. “Who’s that?”

The figure stepped forward into the glow of the candle and resolved itself into the form of a golden-haired woman, hair tied back and gleaming with rain. She smiled and the man’s mouth fell open. He stared at her for a moment. “You’ve been wandering the streets alone?”

“Nobody’s out in this,” replied the woman. The man took a couple of steps towards her so that the candlelight was able to bring her face into greater resolution. Her clothes were dark with rain, but so fine they obviously belonged to a woman of the highest birth. But here her resemblance to the other noblewomen of the land ended. She was not like them: paled, painted, adorned, frail and delicate. Her beauty was harsher; in the bones of her face, the lines around her eyes and the ease of her stance. She wore no gold or silver and her skin was not chalk-white but browned and lined by the sun.

“Where is His Majesty?” asked the man.

“Sleeping. His physician has administered one of his brews: he won’t wake up. He fears the lightning.” The golden-haired woman rolled her eyes.

He observed her for a moment. The wind whispered through the cracks in the door, making the candle flicker. “You’re mad.”

She smiled and raised her eyebrows a little, her eyes slightly narrowed. “That’s what the court says about you. ‘Be careful of Bellamus of Safinim, Your Majesty. The upstart is not right.’”

Bellamus of Safinim held out an arm and she crossed to him, placing one of her own about his waist and supporting his upon her shoulder. Bellamus looked down at her upturned face, her eyes still narrowed, still smiling, and he kissed her. He raised his hand from her shoulder and inspected a finger and thumb, shining with moisture from her clothes. “You are in need of a fire.”

They turned away and into the dark. The candle fought silently with the void, briefly revealing the pool in the centre of the hall into which water fell in sheets from an aperture in the centre of the roof, and then, as they moved on down a corridor, illuminating faded frescoes on the plastered walls. The queen turned her head as they passed to follow one of a boar being skewered by a spear; then another of a bull-necked man in profile, surrounded by leaves and dancing figures. The plaster on which it had been painted had shrunk and cracked and the queen could smell the dust it gave off as it silently disassembled.

At the end of this corridor was a more consistent glow and the two figures emerged into another stone room. This one had a hearth crudely chiselled into a wall, with one wooden chair by the fire that burned within, and another drawn up to a glassless window on the other side of the room.

“You were awake?” asked the queen, glancing at the fire.

“Watching the lightning.” Bellamus steered her into the seat by the fire and snuffed out the candle between finger and thumb. He crossed the room to fetch the chair by the window and a blanket that lay next to it, bringing both back to the woman. He gave her the blanket and drew up the chair beside her. “So what did the king say?” he asked.

“He said you’re going to war.”

She raised her eyebrows a little in response, staring into the hearth.

Bellamus laughed; at first a gentle chuckle, until he lost control of it and it became a full-throated roar of triumph. It carried him onto his feet, and he turned towards the queen to perform a little bow. “Well done, Your Majesty,” he said, and he leaned forward to kiss her again, his fingers digging into her shoulders. He broke away but did not resume his seat. “How did you manage that?”

The praise ran off her. “We both managed it. You scared him wicked, the fiery snakes and the flooding put the fear of God into him, and I directed both those fears.”

The fiery snakes. The night before, a cool evening with a clear sky, the sound of wails and screams had drawn Queen Aramilla to her window. Looking out, she saw a sky stained unearthly green. As though a veil had descended from the stars, swaying and billowing in a breeze that stirred this apparition alone. It intensified, resembling a giant pot of emerald ink that had been spilled among the stars, flowing in rivers from one horizon to another. Aramilla had watched, entranced and awed, as the city beneath her began to cry. The streets emptied, some people fleeing for their houses; others to the church to pray for deliverance from whatever this omen signified. It had gone on through the night until the clouds preceding the storm rolled in, obscuring the sight.

“They were beautiful,” said Bellamus. He sank into his seat again. “They did not look like an ill omen to me, but I’m glad if the king saw things differently.”

“Well, they were not an ill omen for you,” replied the queen. “They may yet be an ill omen for the king. I made sure he saw it that way, anyway. The flooding, the plague and now the snakes in the sky. He thinks God is furious.”

“I am impressed. Was he not worried by launching a campaign so late in the season?”

“He was more worried at the thought of enduring a winter with God’s anger unchecked.” She placed a hand on his cheek. “But I’ve sent you to war, my soldier. Don’t make me regret it.” She sounded a little amused, but he grasped her hand anyway.

“Bring me something back from beyond the Abus?” Her pupils were wide, drinking in the sight of him.

He glanced at her. “What should you like? The Anakim have no treasures. They don’t value anything that can’t be put to use.”

“What do they have?”

“Weapons,” said Bellamus. “Bigger and better than anything in the south. I could bring you a splendid axe?”

“Keep thinking,” she said, amused. There came a pause. “I’d settle for the antlers of a giant elk.”

“A trifle,” said Bellamus. “But I intend to present something special to the king. You will not be happy unless you have something equally magnificent.”

“What will you give him?”

Bellamus nodded slightly to himself. “The skull of the Black Lord.” He still spoke mildly.

She looked at him out of the corner of her eye and then leaned into his chest. “My upstart. I don’t envy the Anakim having you as an enemy.”

Silence fell for a time. A flash of white light allowed the queen to see this room as it might appear in daylight for the merest instant. Then the darkness swallowed it once more. The queen counted ten heartbeats before a roll of thunder rumbled by and she shivered comfortably. “I wish I could come north. I want to see the Anakim before you wipe them out.”

Bellamus had lapsed into thoughtful silence. He stared into the flames, playing vacantly with her hair.

“Have you ever killed one of them?” she asked. “An Anakim?”

“Once or twice,” he said. “Never a fully armed and armoured warrior though. I leave those to greater heroes than I. But like all of us, they are considerably less formidable when caught by surprise.”

“Is it true about their bone-plates? Or was that just another way to frighten the king?”

Bellamus grinned. “If we are to survive this game, we must stick to lies that won’t be uncovered. That one is true. From groin to neck, they are exceedingly difficult to pierce.”

“My father scoffed at that. He said it was a rumour of war.”

“Earl Seaton is fortunate enough never to have met an Anakim in the flesh. Our borders have been so safe for so long that people have forgotten how severe that threat really is. It is no rumour, my queen.”

She squirmed slightly in his arms. “So why disturb them, then?” she pressed him. “I thought they fascinated you. And however uneasy, the peace has held for years. Why risk it all to silence them?”

Bellamus was quiet for a moment and she knew he was wondering how much to reveal. Eventually, he said, “You must pick a side, and then advance it with all your might—must you not? The other side will assuredly do the same. Only by doing it harder will your side triumph.”

She thought about that. “I have a side.”

“I know who you fight for,” he said pointedly.

“The same person you fight for.” She smiled up at him. “Me. 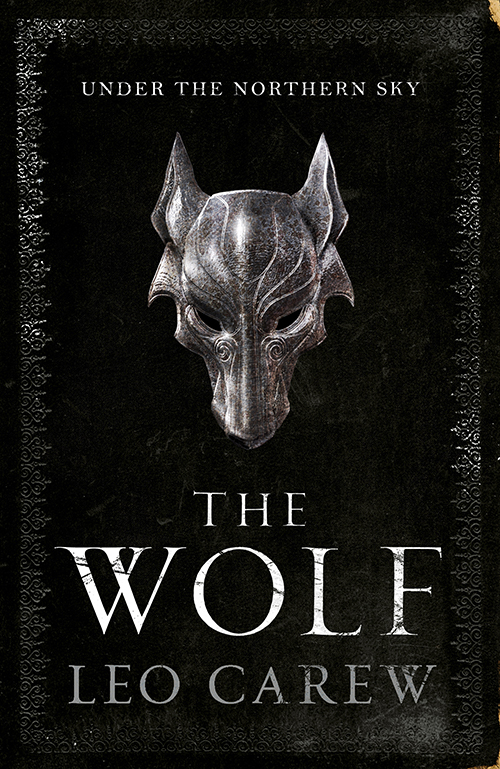 Leo Carew is a 26-year-old Cambridge graduate of Biological Anthropology, currently studying medicine. Apart from writing, his real passion is exploration, which led him to spend a year living in a tent in the High Arctic, where he trained and worked as an Arctic guide. The Wolf is his first novel.