Imagine The Bourne Identity meets Gravity and you’ll get Tracer, the most exciting action thriller set in space you’ll ever read – guaranteed to leave your heart pounding and your mind racing.

Sarah Lotz, author of The Three calls it “fast, exhilarating and unforgettable”.

The ship is breaking up around them.

The hull is twisting and creaking, like it’s trying to tear away from the heat of re-entry. The outer panels are snapping off, hurtling past the cockpit viewports, black blurs against a dull orange glow.

The ship’s second-in-command, Singh, is tearing at her seat straps, as if getting loose will be enough to save her. She’s yelling at the captain, seated beside her, but he pays her no attention. The flight deck below them is a sea of flashing red, the crew spinning in their chairs, hunting for something, anything they can use.

They have checklists for these situations. But there’s no checklist for when a ship, plunging belly-down through Earth’s atmosphere to maximise the drag, gets flipped over by an explosion deep in the guts of the engine, sending it first into a spin and then into a screaming nosedive. Now it’s spearing through the atmosphere, the friction tearing it to pieces.

The captain doesn’t raise his voice. “We have to eject the rear module,” he says.

He ignores her, reaching up to touch the communicator in his ear. “Officer Yamamoto,” he says, speaking as clearly as he can. “Cut the rear module loose.”

Koji Yamamoto stares up at him. His eyes are huge, his mouth slightly open. He’s the youngest crew member, barely eighteen. The captain has to say his name again before he turns and hammers on the touch-screens.

The loudest bang of all shudders through the ship as its entire rear third explodes away. Now the ship and its crew are tumbling end over end, the movement forcing them back in their seats. The captain’s stomach feels like it’s broken free of its moorings. He waits for the tumbling to stop, for the ship to right itself. Three seconds. Five.

“Guidance systems are gone,” McCallister shouts, her voice distorting over the comms. “The core’s down. I got nothing.”

McCallister’s straps snap. She’s hurled out of her chair, thudding off the control panel, leaving a dark red spatter of blood across a screen. Yamamoto reaches for her, forgetting that he’s still strapped in. Singh is screaming.

“Dominguez,” says the captain. “Patch me through.”

Dominguez tears his eyes away from the injured McCallister.

A second later, his hands are flying across the controls. A burst of static sounds in the captain’s comms unit, followed by two quick beeps.

He doesn’t bother with radio protocol. “Ship is on a collision path. We’re going to try to crash-land. If we—”

Foster doesn’t have to identify himself. His voice is etched into the captain’s memory from dozens of flight briefings and planning sessions and quiet conversations in the pilots’ bar.

The captain doesn’t know if the rest of flight command are listening in, and he doesn’t care. “Marshall,” he says. “I think I can bring the ship down. We’ll activate our emergency beacon; sit tight until you can get to us.”

“What are you talking about?”

There’s another bang, and then a roar, as if the ship is caught in the jaws of an enormous beast. The captain turns to look at Singh, but she’s gone. So is the side of the ship. There’s nothing but a jagged gash, the edges a mess of torn metal and sputtering wires. The awful orange glow is coming in, its fingers reaching for him, and he can feel the heat baking on his skin.

“Marshall, listen to me,” the captain says, but Marshall is gone too. The captain can see the sky beyond the ship, beyond the flames. It’s blue, clearer than he could have ever imagined. It fades to black where it reaches the upper atmosphere, and the space beyond that is pinpricked with stars.

One of those stars is Outer Earth.

Maybe I can find it, the captain thinks, if I look hard enough. He can feel the anger, the disbelief at Marshall’s words, but he refuses to let it take hold. He tells himself that Outer Earth will send help. They have to. He tries to picture the faces of his family, tries to hold them uppermost in his mind, but the roaring and the heat are everywhere and he can’t—

My name is Riley Hale, and when I run, the world disappears.

Feet pounding. Heart thudding. Steel plates thundering under my feet as I run, high up on Level 6, keeping a good momentum as I move through the darkened corridors. I focus on the next step, on the in–out, push–pull of my breathing. Stride, land, cushion, spring, repeat. The station is a tight warren of crawlspaces and vents around me, every surface metal etched with ancient graffiti.

The shout comes from behind me, down the other end of the corridor. The skittering footsteps that follow it echo off the walls. I thought I’d lost these idiots back at the sector border – now I have to outrun them all over again. I got lost in the rhythm of running – always dangerous when someone‘s trying to jack your cargo. I refuse to waste a breath on cursing, but one of my exhales turns into a growl of frustration.

The Lieren might not be as fast as I am, but they obviously don’t give up.

I go from a jog to a sprint, my pack juddering on my spine as I pump my arms even harder. A tiny bead of sweat touches my eye, sizzling and stinging. I ignore it. No tracer in my crew has ever failed to deliver their cargo, and I am not going to be the first.

I round the corner – and nearly slam into a crush of people. There are five of them, sauntering down the corridor, talking among themselves. But I’m already reacting, pushing off with my right foot, springing in the direction of the wall. I bring my other foot up to meet it, flattening it against the metal and tucking my left knee up to my chest. The momentum keeps me going forwards even as I’m pushing off, exhaling with a whoop as I squeeze through the space between the people and the wall. My right foot comes down, and I’m instantly in motion again. Full momentum. A perfect tic-tac.

The Lieren are close behind, colliding with the group, bowling them over in a mess of confused shouts. But I’ve got the edge now. Their cries fade into the distance.

There’s not a lot you can move between sectors without paying off the gangs. Not unless you know where and how to cross. Tracers do. And that’s why we exist. If you need to get something to someone, or if you’ve got a little package you don’t want any gangs knowing about, you come find us. We’ll get it there – for a price, of course – and if you come to my crew, the Devil Dancers, we’ll get it there fast.

The corridor exit looms, and then I’m out, into the gallery. After the corridors, the giant lights illuminating the massive open area are blinding. Corridor becomes catwalk, bordered with rusted metal railings, and the sound of my footfalls fades away, whirling off into the open space.

I catch a glimpse of the diagram on the far wall, still legible a hundred years after it was painted. A scale picture of the station. The Core at the centre, a giant sphere which houses the main fusion reactor. Shooting out from it on either side, two spokes, connected to an enormous ring, the main body. And under it, faded to almost nothing after over a century: Outer Earth Orbit Preservation Module, Founded AD 2234.

Ahead of me, more people emerge from the far entrance to the catwalk. A group of teenage girls, packed tight, talking loudly among themselves. I count ten, fifteen – no. They haven’t seen me. I’m heading full tilt towards them.

Without breaking stride, I grab the right-hand railing of the catwalk and launch myself up and over, into space.

For a second, there’s no noise but the air rushing past me. The sound of the girls’ conversation vanishes, like someone turned down a volume knob. I can see all the way down to the bottom of the gallery, a hundred feet below, picking out details snatched from the gaps in the web of criss-crossing catwalks.

The floor is a mess of broken benches and circular flowerbeds with nothing in them. There are two young girls, skipping back and forth over a line they’ve drawn on the floor. One is wearing a faded smock. I can just make out the word Astro on the back as it twirls around her. A light above them is flickering off–on–off, and their shadows flit in and out on the wall behind them, dancing off metal plates. My own shadow is spread out before me, split by the catwalks; a black shape broken on rusted railings. On one of the catwalks lower down, two men are arguing, pushing each other. One man throws a punch, his target dodging back as the group around them scream dull threats.

I jumped off the catwalk without checking my landing zone. I don’t even want to think what Amira would do if she found out. Explode, probably. Because if there’s someone under me and I hit them from above, it’s not just a broken ankle I’m looking at.

Time seems frozen. I flick my eyes towards the Level 5 catwalk rushing towards me.

It’s empty. Not a person in sight, not even further along. I pull my legs up, lift my arms and brace for the landing.

Contact. The noise returns, a bang that snaps my head back even as I’m rolling forwards. On instinct, I twist sideways, so the impact can travel across, rather than up, my spine. My right hand hits the ground, the sharp edges of the steel bevelling scraping my palm, and I push upwards, arching my back so my pack can fit into the roll.

Then I’m up and running, heading for the dark catwalk exit on the far side. I can hear the Lieren reach the catwalk above. They’ve spotted me, but I can tell by their angry howls that it’s too late. There’s no way they’re making that jump. To get to where I am, they’ll have to fight their way through the stairwells on the far side. By then, I’ll be long gone.

“Never try to outrun a Devil Dancer, boys,” I mutter between breaths. 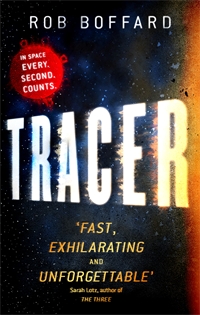 Rob Boffard is a South African author who splits his time between London, Vancouver and Johannesburg. He has worked as a journalist for over a decade, and has written articles for publications in more than a dozen countries, including the Guardian and Wired in the UK.

“Tracer is the literary equivalent of a base jump: fast, exhilarating and unforgettable, and once you start it you can’t stop. I loved it” Sarah Lotz, author of The Three

“A stunning debut by Rob Boffard that never lets up, from the nerve-jangling beginning to the explosive end” James Douglas, author of The Doomsday Testament