Then he began to gaze about

and saw within the walls a rout

of folk that were thither drawn below

and mourned as dead, but were not so.

Summer, soft green hills and shaded dells, lay breathless under a pall of smoky apple-blossom dusk. The other Summer, her white hands rising from indigo velvet to gleam in the gloaming, waved the rest of her handmaidens away. They fled, giggling in bell-clear voices and trailing their sigh-draperies, a slim golden-haired mortal boy among them fleet as a deer—Actaeon among the leaping hounds, perhaps.

Though that young man, so long ago, hadn’t been torn apart by gray-sided, long-eared hounds. A different beast had run him to ground. The mortals, always confused, whispered among themselves, and their invented gods grew in the telling.

Goodfellow, brown of hair and sharp of ear, often wondered if the sidhe did as well.

The Fatherless smiled as he watched Summer wander toward him through the dusk. She was at pains to appear unconcerned. His own wide, sunny grin, showing teeth sharper than a mortal’s, might have caused even the strongest of either Court unease.

Of course, the free sidhe—those who did not bend knee to Summer or her once-lord Unwinter—would make themselves scarce when the Goodfellow grinned. They had their own names for him, all respectful and none quite pleasing to him when he chose to take offense.

Summer halted. Her hair, ripples of gold, stirred slightly in the perfumed breeze. Above and between her gleaming eyes, the Jewel flashed, a single dart of emerald light piercing the gloom as the day took its last breath and sank fully under night’s mantle.

Someday, he might see this sidhe queen sink as well. How she had glimmered and glistened, in her youth. He had once trifled with the idea of courting her himself, before her eye had settled on one altogether more grim.

The quarrel, Goodfellow might say, were he disposed to lecture, always matches the affection both parties bore before, does it not? The Sundering had taken much from both Courts, and that bothered him not a bit. When they elbowed each other, the space between them was wide enough to grant him further sway. Carefully, of course. So carefully, patiently—the Folk were often fickle, true, but they did not have to be.

He let her draw much closer before he lay aside his cloaking shadows, stepping fully into her realm between two straight, slender birches, and she barely started. Her mantle slipped a fraction from one white shoulder, but that could have been to expose just a sliver of pale skin, fresh-velvet as a new magnolia petal. Artfully innocent, that single peeping glow could infect a mortal’s dreams, fill them with longing, drive all other thought from their busy little brains.

If she, the richest gem of Summer’s long, dreamy months, so willed it.

“Ah, there she is, our fairest jewel.” He swept her a bow, an imaginary cap doffed low enough to sweep the sweet grass exhaling its green scent of a day spent basking under a perfect sun. “Where is your Oberon, queenly one? Where is your lord?”

“Ill met by moonlight, indeed.” She smiled, just a curve of those red, red lips poets dreamed of. There had been mortal maids, occasionally, whose salt-sweet fragility put even Summer to shame, and woe betide them if any of the Folk should carry tales of their radiance to this corner of the sideways realms. “And as you are an honest Puck, I have come alone.”

“Fairly.” His smile broadened. “What would you have of me, Summer? And what will you give in return?”

“I have paid thee well for every service, sprite, and have yet to see results for one or two dearly bought.” Summer drew her mantle closer. She did not deign to frown, but he thought it likely one or two of her ladies would take her expression as a caution, and make themselves scarce. They would be the wisest ones. The favorites, of course, could not afford to risk her noting such a scarcity, and so would stay.

“Oh, patience becomes thee indeed, Summer.” He capered, enjoying the feel of crushed sweet grass under his leather-shod feet. A fingersnap, a turn, as if it were midsummer and the revels afoot. “As it happens, I bring word from a certain mortal.”

“Mortal? What is a mortal to me?” Her hand dropped, and she did not turn away. Instead, her gaze sharpened, though she looked aside at the first swirling sparks of fireflies drawn by her presence. There was nothing the lamp-ended creatures loved more than her own faint glow by night. Except perhaps the Moon itself, Danu’s silver eye.

“Then you do not wish to hear of success? O changeable one!”

“Puck.” The fireflies scattered, for Summer’s tone had changed. In her sable mantle, the golden hair paler now as her mood drained its tint, her ageless-dark eyes narrowing so very slightly, the loveliness of Summer took on a sharper edge. “I grow weary of this.”

“Then I shall be brief. He has worked another miracle, this mortal of science. There is a cure.”

She examined him for a long moment, and the Goodfellow suffered it. There was a certain joy to be had in allowing her to think he quaked at the thought of her displeasure. Far greater was the amusement to be had in knowing that the Queen of the Seelie Court, Summer herself, the fount of Faerie—for so the bards called her, though Goodfellow could have told them where a truer fountain welled—had very little choice but to dance to his tune.

She turned, a quarter profile of hurtful beauty, her black eyes flashing dangerous. The stars in their depths spun lazily, cold fires of the night before any tree was named. If an ensnared mortal could see her now, Goodfellow thought, he might well drop of the heartshock and leave the trap entire.

“And what is the price for this miracle, sprite?”

He affected astonishment, capering afresh, hopping to and fro. Under the grass was sere dry bramble, and it crunched as he landed. “What? I am no mortal tailor, to double-charge. All you must do is send your own sprite to collect it. The mortal longs for any breath of you, he entreats a word, a look, a sigh.”

“Does he?” Summer tapped one perfect nail against her lips. There was a rosy tint a mortal might mistake for polish on its sweet curve, and it darkened to the crimson of her smile as her mood shifted again. Changeable as Summer, the free sidhe said. Unwinter was far less capricious, of course… but just as dangerous.

“Welladay.” Summer’s smile dawned again, and she turned away still further. “Does his miracle perform, he may receive a boon. I shall send him a sprite, dear Goodfellow, and our agreement stands.”

“My lady.” He cut another bow, but she did not see the sarcastic turn his leer had taken. “You do me much honor.”

“Oh, aye.” A girl’s carefree giggle, and she moved away, the grass leaning toward her glow and the fireflies trailing. “I do, when the service is well wrought. Farewell, hob. I’ll send him a familiar face, since mortals are timid.” Her laugh, deeper and richer now, caroled between the shivering birches, a pocket of cold swallowing a struggling swimmer.

“Mind that you do,” Goodfellow said, but softly, softly. He capered once more, to hear the dried brambles crunch underfoot, like mortal bones. He spun, quick brown fingers finding the pipes at his belt. He lifted them to his mouth, and his own eyes fired green in the darkness. Full night had fallen, and silver threads of music lifted in the distance—the Queen was well pleased, it seemed, and had called upon the minstrels to play.

He stepped sideways, pirouetting neatly on the ball of one foot, and emerged in a mortal alley. It was night here, too, and as he danced along, the breathy, wooden notes from his pipes arrowed free in a rill. Concrete whirled underfoot, the mortal world flashing and trembling as he skipped across its pleats and hollows. They did not see, the dull cold sacks of frail flesh, and only some few of them heard.

Those who did shuddered, though they could not have said why. A cold finger laid itself on their napes, or in another sensitive spot, and the gooseflesh walked over them. None of them suited Goodfellow, so he ambled on.

A little while later, a mortal chanced across his path—a sturdy youth, strong and healthy, who thought the Fatherless a common, staggering drunkard. With the pipes whispering in his ear, luring him down another path, the mortal boy did not realize he was prey instead of hunter until his unvictim rounded on him with wide, lambent eyes and a sharp, sickeningly cheery smile.

Yes, Goodfellow decided as he crouched to crunch, hot salt against his tongue, bramble did sound like mortal bones, if it was dry enough.

Pleased by his own thoroughness, he ate his fill. 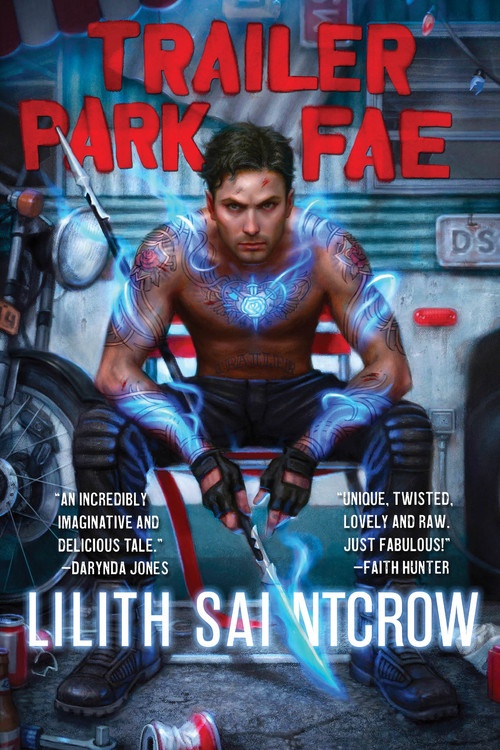 Lilith Saintcrow was born in New Mexico, bounced around the world as an Air Force brat, and fell in love with writing when she was ten years old.  She currently lives in Vancouver, WA.