Where to start reading the books by Alastair Reynolds

If you are a fan of Iain M. Banks and Adrian Tchaikovsky, you’re going to love Alastair Reynolds. Whether you’re venturing out on the starships of Revelation Space, or the satellite utopia of the Glitter Band, endless adventures await you.

Wondering where to start? Here are our suggestions!

For the binge readers:

Calling all Mass Effect players, this trilogy of books is right up your alley. And the best part? No annoying Makko mission to frustrate and confound you. Just an excellent space opera about humanity’s desperate fight against the Inhibitors, alien killing machines designed to detect intelligent life and destroy it.

Books Included in the Series: 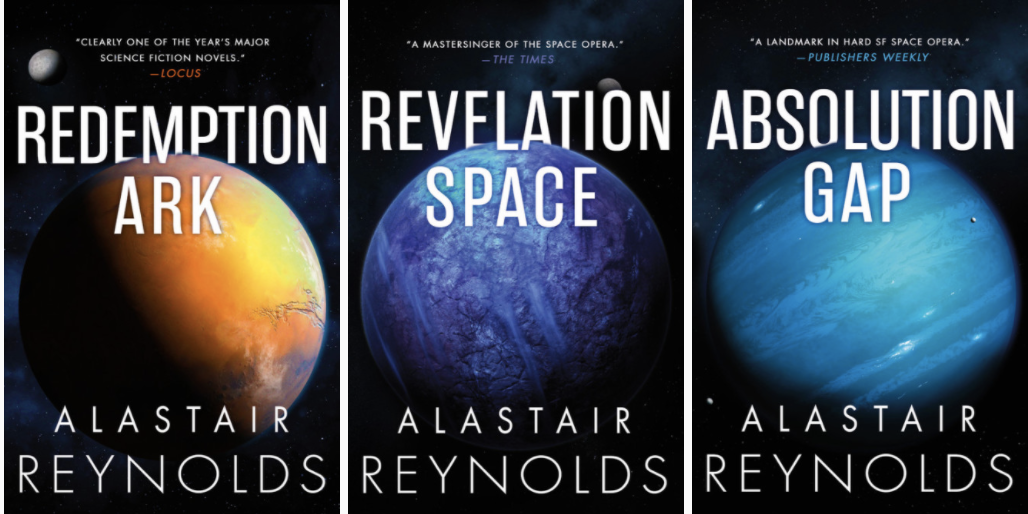 Not ready to commit to a full series but intrigued by the Inhibitor Trilogy?

Here are two other options for you to choose from!

The once-utopian Chasm City— a domed human settlement on an otherwise inhospitable planet — has been overrun by a virus known as the Melding Plague, capable of infecting anybody, organic or computerized. In this hellscape, security operative Tanner Mirabel hunts for a post-mortal killer. If you loved the noir elements of James S. A. Corey’s LEVIATHAN WAKES, you’ll love CHASM CITY, the stand-alone space opera set in the universe of the Inhibitor Trilogy.

However, if you are finding it difficult to sit down and enjoy a full-length novel without distraction these days: good news: Alastair Reynolds is just as prolific as a writer when it comes to short fiction as he is a novelist. These two collections will provide the perfect brief escapes from your tight quarantine quarters. Check out GALACTIC NORTH and DIAMOND DOGS, TURQUOISE DAYS. 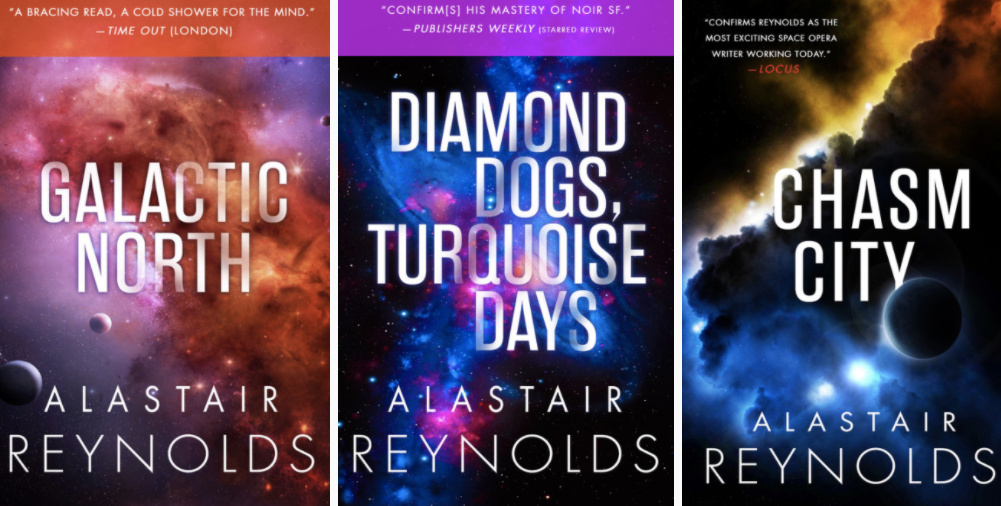 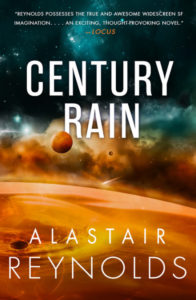 But a device at the other end of a wormhole may hold the key to our survival. If it doesn’t fall into the wrong hands first in this stand-alone science fiction thriller.

For those who love a little romance in their space opera: 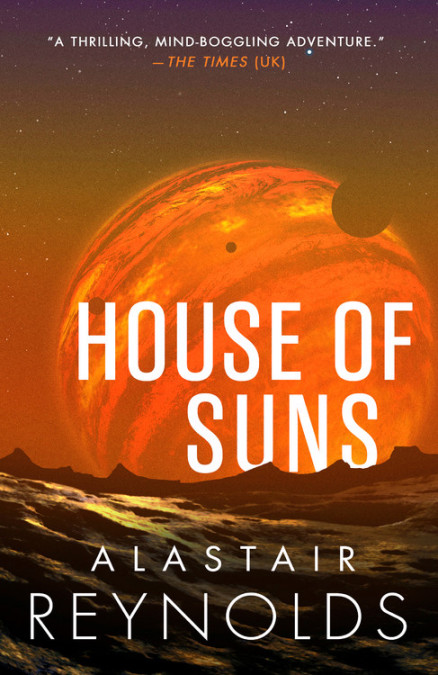 Every two hundred thousand years the Genetian line, a family of cloned beings descended from a single brilliant mind, meet to swap stories and memories of their travels across the galaxy. But there is little to celebrate at the Gathering this year. A pair of star-crossed lovers must hunt out the mysterious players who nearly succeeded in wiping out their entire line.

HOUSE OF SUNS is a fascinating examination of sentience and the meaning of “self” against the backdrop of a high-stakes feud spanning six-million-years and the universe’s deadliest family reunion.

If you love a good mystery:

Was Joe Miller your favorite character on The Expanse? Did you love the mystery at the heart of Mur Lafferty’s SIX WAKES? The Prefect Dreyfus series is the operatic police procedural you’ve been waiting for.

Some of you may even already be ahead of the game. We published ELYSIUM FIRE, a newer adventure featuring Tom Dreyfus back in 2018. Now you can finally own AURORA RISING, the first stand-alone novel starring the character, in a cover style matching the rest of your collection. 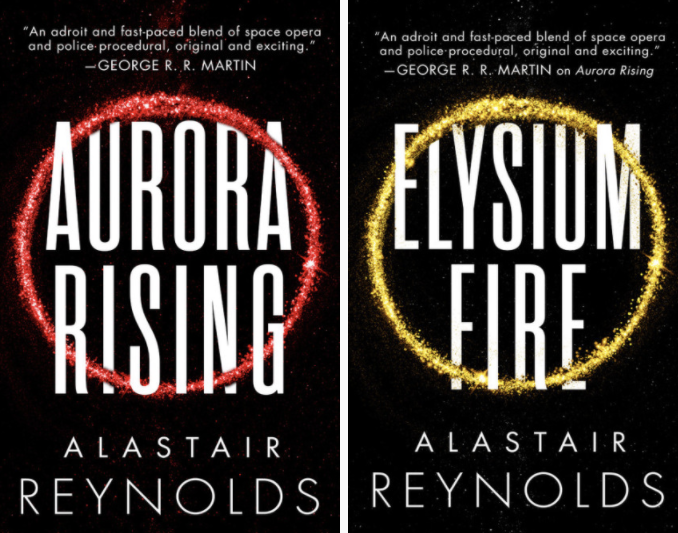 If you prefer to be on the cutting-edge of things:

If you prefer to start with an author’s latest work, there is no better time to dive into the works of Alastair Reynolds. We just recently published the concluding volume of his Revenger trilogy this spring.
Dive into a complete series about two sisters separated by intergalactic politics and war and the high-octane treasure hunt that brings them back together as space pirates and shadow governments vie for control of ancient technology and secrets.
Books Included in the Series:
REVENGER
SHADOW CAPTAIN
BONE SILENCE 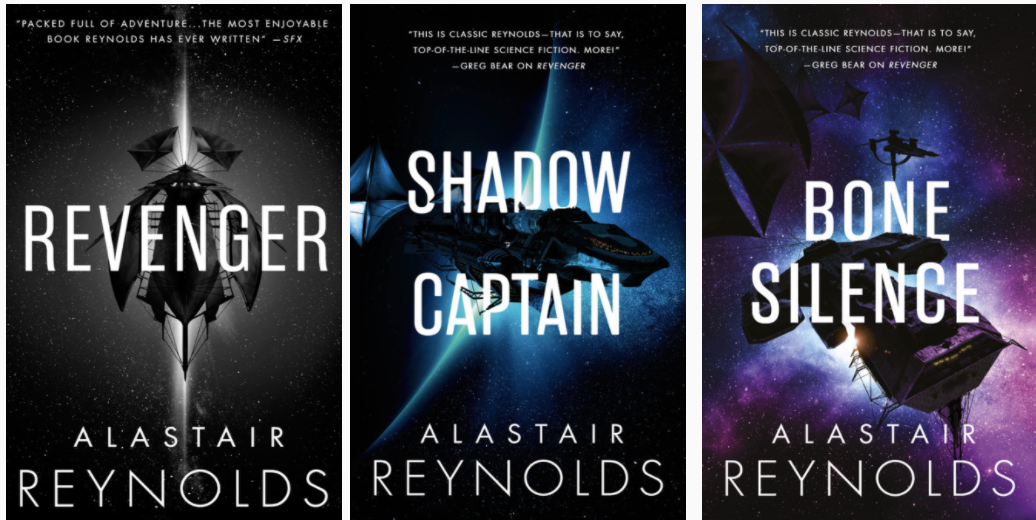 For those who never forgot the Cantebury: 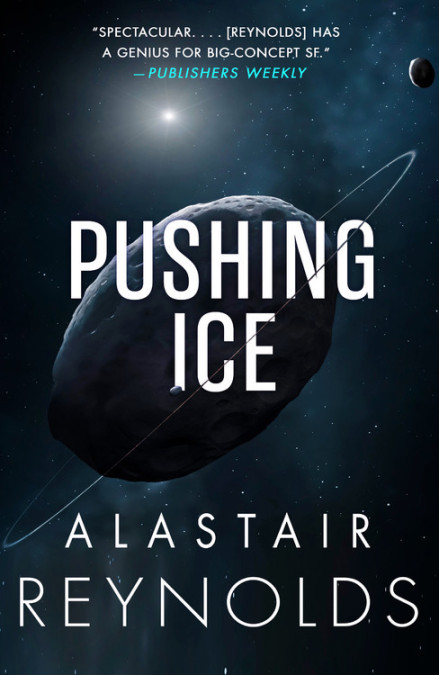 PUSHING ICE then is the stand-alone space opera for you about a crew of ice-miners who are suddenly thrust into the unlikely role of heroes when an ancient artifact orbiting Saturn suddenly wakes up.

This is the book for those of you who love wit, charm, and quirky ensemble casts with hearts of gold.