Posts Tagged ‘a dance of blades’ 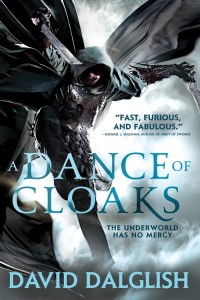 Assassin or protector; every choice has its consequences.

For the rogues and fantasy readers out there, Orbit’s Fall line-up is an exciting one, and it includes the Shadowdance series by David Dalglish! Starting in October, we’re publishing the first three books back-to-back. Here’s an excerpt from the first book, A DANCE OF CLOAKS (US | UK | AUS)

For the past two weeks the simple building had been his safe house, but now Thren Felhorn distrusted its protection as he limped through the door. He clutched his right arm to his body, fighting to halt its trembling. Blood ran from his shoulder to his elbow, the arm cut by a poisoned blade.

“Damn you, Leon,” he said as he staggered across the wood floor, through a sparsely decorated room, and up to a wall made of plaster and oak. Even with his blurred vision he located the slight groove with his fingers. He pressed down, detaching an iron lock on the other side of the wall. A small door swung inward.

The master of the Spider Guild collapsed in a chair and removed his gray hood and cloak. He sat in a much larger room painted silver and decorated with pictures of mountains and fields. Removing his shirt, he gritted his teeth while pulling it over his wounded arm. The toxin had been meant to paralyze him, not kill him, but the fact was little comfort. Most likely Leon Connington had wanted him alive so he could sit in his padded chair and watch his “gentle touchers” bleed Thren drop by drop. The fat man’s treacherous words from their meeting ignited a fire in his gut that refused to die.

Become a fan of the official Facebook fanpage for the latest updates and connect with other fans of the series.

Praise for A DANCE OF CLOAKS

“Dalglish concocts a heady cocktail of energy, breakneck pace and excitement that a reader could get drunk on.” – Sam Sykes, author of Tome of the Undergates