I’ve been looking forward to unveiling our cover visual for Rule 34, the latest brilliant near-future novel by Charles Stross. This one is set in Edinburgh in a future that’s just round the corner and takes us at a cracking pace though a complex series of bizarre interlinked crimes. We loved it and advance praise has been amazing too. But here’s the cover and some early quotes: 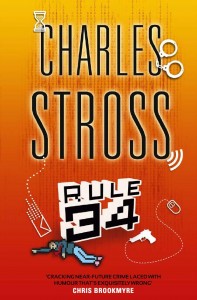 ‘A savvy, funny, viciously inventive science fiction novel that combines police procedure with the dark side of nerd culture to produce a grotesque and gripping page-turner’ Cory Doctorow

‘Charles Stross is a grandmaster of that most difficult science-fictional era, the near future. His novel, Rule 34, is a seamlessly transformation of our near-term everyday world into serious strangeness’
Vernor Vinge

I’m delighted to announce our acquisition of three wonderful new books by the award-winning Charles Stross, and there’s been a big buzz of excitement at Orbit HQ over this new deal. I’ve loved Charles Stross’s books for years and always enjoy his wit, his storytelling wizardry and his playful familiarity with the cutting edge of technology. The new novels are The Apocalypse Codex, Neptune’s Brood and The Lambda Functionary and span the full range of Stross’s work – from Lovecraftian horror to space opera to near-future crime. And we’ll be publishing these in the UK/ANZ from Summer 2012.

Here’s just a snapshot of the great things that have been said about Charles Stross’s work:

As keenly observant of our emergent society as it is of our emergent technologies …one extremely smart species of fun” William Gibson
“Not only edgy and smart but grounded in human concerns” Wired
“Stretches the limits of narrative to make us see how wonderful ideas can be”
Time Out
“Stross is an author who anyone interested in SF should read and relish” SFX
“The cutting edge of modern science fiction” SFSite.com

Following on from last week’s post about the publication of Saturn’s Children and Wireless, I see that the powers that be on the excellent SF podcast magazine, Escape Pod, have offered up their latest podcast and lo! it is none other than Charles Stross‘s ‘Rogue Farm’, which appears in the aforementioned Wireless.

So, point your iTunes, web browser or enslaved artificial intelligence at Escape Pod, and enjoy some free Strosstime: ‘Rogue Farm’, recorded at Balticon 43.

July sees the publication of not one, but two, new Charles Stross books – the paperback of Saturn’s Children and the hardback of Wireless.

Saturn’s Children is Charlie’s homage to the late Robert Heinlein, as the eagle-eyed among you will have spotted from this post’s title. It also gives Charlie a sixth consecutive Hugo shortlisting for Best Novel, which is a remarkable achievement – even the great Robert Silverberg only managed four.  Audaciously told without a single human character, it is nonetheless replete with humanity as well as Charlie’s trademark dark humour, clever plotting and 100-mile-an-hour ideas.

Wireless, is a new collection of short fiction, including Locus Award-winning novella ‘Missile Gap’, Bob Howard story ‘Down on the Farm’ (read an extract here), ‘Unwirer’, a collaboration with fellow Prometheus Award-winner Cory Doctorow and the hitherto unpublished novella ‘Palimpsest’. Running the full gamut of Charlie’s incredible imagination, which, as everyone knows, goes up to eleven, Wireless is a snapshot of a writer at the height of his powers and a wonderful introduction to an essential voice in modern science fiction.

Fantastic news just in: the final ballot for the 2009 Hugo Awards has been announced and we are absolutely delighted to congratulate Charles Stross, whose Saturn’s Children is nominated in the Best Novel category.

As if having a book shortlisted for the premier award in the SF world isn’t enough, the unfeasibly talented Mr Stross becomes the first author to have a novel on the Hugo shortlist in six consecutive years!

Trying to predict the future is fraught with peril, but I feel quite confident in saying that it will be quite some time before that amazing achievement is matched or bettered. Even the great Robert Silverberg only managed four-in-a-row.

Many congratulations to Charlie from all at Orbit, and if you are eligible to vote for the Hugos, remember:

*Actually, maybe you shouldn’t vote often. That would probably be bad.

The shortlist for the 2008 Hugo Awards has just been released, and we are delighted to see that Charles Stross‘s cutting-edge near future heist thriller, Halting State, has made the ballot. This is the fifth consecutive year that a Charles Stross novel has been shortlisted for the Hugo, passing the great Robert Silverberg‘s previous record, which is an amazing achievement. Many congratulations to Charlie on his most recent shortlisting – we’ve all got our fingers crossed that he walks away with the rocket ship, this year!

Oh, and I’ve read his forthcoming space opera, Saturn’s Children – don’t bet against it being six-in-a-row, this time next year . . .