There’s a terrific review of Matter over at the Onion’s A.V. Club.

Read the whole review here, and be sure to check out the lively discussion in the comments. 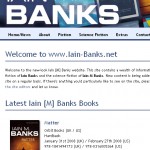 The official Iain (M.) Banks website has been re-launched at www.iain-banks.net. Check it out for all the news and reviews, along with some very interesting contests coming up…

Meanwhile, in an interview at io9.com Banks reveals the hidden Thunderbirds influence that runs through the Culture novels:

“Thunderbirds gave me a love of big explosions I’ve yet to shake off. It’s kind of ingrained by now. Almost the first thing I think of when I’ve come up with an idea for a Really Big Artifact is how you could blow the living bijeesus out of it…”

And in the i09 review of Matter, Annalee Newitz sums up her thoughts on the book in the headline: “Iain M. Banks’ New Novel Kicks Ass on a Galactic Scale.”

While at BookPage Gavin Grant writes:

Matter is available from Orbit in the US and the UK.