Harry Blackstone Copperfield Dresden is Chicago’s only professional ‘wizard for hire.’ But he’s not been employed by the Chicago Police Department’s Special Investigations Squad since the events of Storm Front, the previous novel. His friend, police chief Karrin Murphy, has been giving him the cold shoulder because of these events – and because it’s down to him that she’s now under the suspicious watch of Chicago Police’s Internal Affairs.

Then one October night, he gets a visit from Lieutenant Murphy about a murder – one that has been very, very messy and seems to be the latest in a series of gruesome events, which coincidentally happen at full moon. And there are more moonlit nights on the way…   END_OF_DOCUMENT_TOKEN_TO_BE_REPLACED 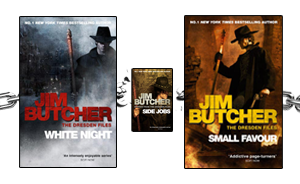 It’s My Birthday, Too is a short story from my new Dresden Files anthology Side Jobs (originally in Many Bloody Returns, edited by Charlaine Harris). The story takes place between White Night and Small Favour.

I’ve met people who are sweeter and nicer and more likeable than Charlaine Harris – but I really can’t remember when. Every author I’ve ever talked with who knows Charlaine just couldn’t be happier about the success of her books and the HBO series True Blood. She’s that nice. I can’t even bring myself to be jealous. She’s that nice. So when she invited me to contribute, I said, ‘Heck, yeah!’

Using a birthday theme (since the book, originally, was supposed to be published on Vlad Dracula’s somethinghundredth birthday) was sort of a challenge. Birthdays are about families. Whether they’re a biological family or one that’s come together by choice, it’s your family who gathers to celebrate the anniversary of you. It’s kind of a profound thing, when you think about it.

But Dresden hadn’t ever really associated his birthday with that kind of joy – only with the knowledge that he’d never really had a family. So I decided to do a story about Harry coping with the unfamiliar role of being the guy celebrating the life of his half brother. I found a very good mall in Chicago that I could demolish with the usual Dresdenesque shenanigans, set the story against the backdrop of a vampire-ish LARP, and knocked this one out over the course of about three weeks.

And here’s where we commence the series.

Storm Front starts in typical film noir mode. With the sentence ‘I heard the mailman approach my office door, half an hour earlier than usual’, we are introduced to Harry Blackstone Copperfield Dresden. And he’s the only person in Chicago’s director enquiries listed under ‘Wizard’.

However, this Harry is not the ‘Potter’ type. As we see from his advertisement, his stock in trade is: ‘Lost items found. Paranormal Investigations. Consulting. Reasonable rates. No love potions, endless purses or other entertainment’. Harry is more of your paranormal dealing, insoluble crime-solving type of guy, and the only wizard used as a consultant by the Chicago Police Special Investigations Department. They need him when dealing with the demons and ghouls that live in the strange other-world of the Nevernever.

Harry is in his typically seedy office when a phone call from Chicago’s SI chief, Lieutenant Karrin Murphy, involves him in a double murder investigation. The male victim is a bodyguard for the local mobster, Johnny Marcone. The other victim is Jennifer Stanton, an escort from the Velvet Room, a gentleman’s club run by one of Chicago’s vampire families.

Things get really interesting when Harry discovers that the murders involve black magic, and a black mage is behind them. And more worryingly, though Harry doesn’t know who it is, the black mage knows him. And is out to get him.

END_OF_DOCUMENT_TOKEN_TO_BE_REPLACED 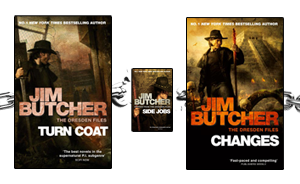 Love Hurts is a short story from my new Dresden Files anthology Side Jobs (originally in Songs of Love and Death, edited by George R. R. Martin and Gardner Dozois). It takes place between Turn Coat and Changes.

Gardner Dozois has a bunch of awards for his anthologies because he’s good at them, and I leapt at his invitation to contribute to the anthology he was working on with George R. R. Martin, originally titled Star-Crossed Lovers. Despite my enthusiasm, finding a starting point for a Dresden story was sort of a puzzler for me, since Harry Dresden might be in the top three Star-Influence-Free lovers in the whole contemporary-fantasy genre. How was I going to bring him into a story with a theme like that?

Answer: Get him into the thick of things next to Murphy when seemingly random love spells are running amok through the city. After that, all I had to do was apply his usual streak of luck and cackle madly to myself while typing. The title of the anthology changed to Songs of Love and Death after I had written the story, which is probably a good thing. Otherwise, I may have tried to find a way to fit a death-metal battle of the bands into the margins somewhere. No one deserves that.

Something Borrowed is a short story from my new Dresden Files anthology Side Jobs (originally in My Big Fat Supernatural Wedding, edited by P.N. Elrod). The story takes place between Dead Beat and Proven Guilty.

I wrote this for the very first anthology in which I’d ever been invited to participate. I’d met Pat Elrod at a convention and thought she was quite a cool person, and when she asked me to take part in her anthology, I was more than happy to do so.

When I wrote this story, I was thinking that the Alphas (a group of werewolves who often provide great backup for Harry at difficult moments) hadn’t gotten nearly enough stage time in the series thus far. It therefore seemed like a good opportunity to give them some more attention, while at the same time showing the progression of their lives since their college days, which I felt was best demonstrated by Billy and Georgia’s wedding.

Inane trivia: While I was in school writing the first three books of the Dresden Files, my wife, Shannon, watched Ally McBeal in the evenings, often while I was plunking away at a keyboard. I didn’t pay too much attention to the show, and it took me years to realize I had unconsciously named Billy and Georgia after those characters in Ally McBeal. Who knew? TV really does rot your brain! 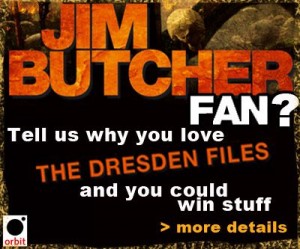 If you’re a Jim Butcher fan, have we got some exciting news … Check out this page and you can win his ENTIRE Dresden Files series so far, including new books when they’re out next Spring, by telling us exactly why you think the Dresden Files series is so great. So, whether you’re a Butcher newbie or a seasoned pro fan, this is a great opportunity to win the whole series re-clothed in their fabulous new-look covers.

This competition is only for UK readers for shipping-related reasons, but there will be three lucky winners and the prize will also include books by authors Trent Jamieson and Kate Griffin as we think you’ll love them too. And if you just feel like telling us why the Dresden Files are greater than awesome, even if you aren’t eligible to win, we’d still love to hear from you!

As we settle in to the New Year, and start looking ahead to some of the fantastic books 2010 is sure to bring us, it behooves us to remember that all of the books cramming the shelves before 25th December are still available. Owing to a warehouse move, our January titles won’t be published until the 21st of the month, so while we wait for the extraordinary array of new releases and exciting new editions of existing favourites, let us remind you of the wonderful titles we published in December 2009.

In alphabetical order (for who would dare choose among them?!), Orbit’s December stars were:

Jim Butcher, with Princeps’ Fury, the fifth volume of his bestselling Roman-influenced fantasy, The Codex Alera. (UK / ANZ)
After bitter fighting, Tavi of Calderon has eventually forged an alliance with Alera’s oldest foes, the savage Canim, and he must escort them on their long sea-voyage home. This will strain their fragile accord – but the worst is yet to come . . .

Full Circle, the final volume of Pamela Freeman’s wonderful Castings Trilogy. (UK / ANZ / US)
Saker has devoted himself to dark enchantments and desires nothing but vengeance. And vengeance he has in abundance. His ghost army is slaughtering those of the new blood, fuelled by an ancient wrong. But while Saker had thought revenge would be simple, he’s now plagued by voices foreshadowing a calamity beyond his comprehension . . .

The conclusion to Charlie Huston’s acclaimed Joe Pitt sequence, My Dead Body. (UK / ANZ)
Manhattan’s Vampyre clans have at last abandoned any claims on civility and have finally sprung fully for each others’ throats. The carefully maintained peace is forgotten. When the stakes are this high, there can be no neutrality – only winners and losers. But when the blood stops flowing, what side will Joe Pitt be on . . . ?

Ian Irvine’s triumphant conclusion to the climactic Song of the Tears trilogy, Destiny of the Dead. (UK)
Nish and his remaining allies are trapped on the Range of Ruin, surrounded by the relentless army of his father, the God-Emperor. And Nish’s choices seem limited: a humiliating surrender, or a suicidal fight to the death . . .

‘For sheer excitement, there’s just no-one else like Irvine around at the moment’ SFX

And finally, Beyond the Wall of Time, the shattering conclusion to Russell Kirkpatrick’s majestic second trilogy, The Broken Man. (UK /US)
The wall of time has fallen, leaving the Gods free to indulge their hunger for violence. Few know of their escape into mortal lands – and these few struggle against the control of the malevolent mage Husk and with their own problems.

‘Not since Tolkien have I been so awed’ Trudi Canavan

A fine way to see out the year, we’re sure you’ll agree. Stay tuned for some first chapter extracts.