I have a confession to make — I like characters that are flawed. I like them bitter and acerbic, and as capable of evil as they are of goodness. I particularly like those who are a little…unhinged. Not so much crazy-dangerous as crazy-reckless.

In the Immortal Empire series, I created Xandra Vardan who I think is a delightfully twisted character. I don’t want to go into spoiler territory, so I’ll say only that Xandy is a monster — even amongst the werewolves and vampires that populate her world. She’s a good-hearted person (for the most part). She’s loyal to those she loves and would do anything to protect them. She’s also snarky, petty and sometimes a raving bitch. And sometimes, she’d like to eat your liver — maybe open a vein. It would be entirely too easy for Xandra to kill, and she’s pretty certain she’d like it. In most stories she’d probably be the villain. In Long Live the Queen (and the first two books in the series, God Save the Queen, The Queen is Dead), she’s the hero.

I don’t think I’m alone in this preference for slightly mad characters. There’s a reason why Faith was so popular with Buffy the Vampire Slayer fans. She was predictable only in her unpredictability — a wild card. I loved it when Willow went dark, or when Spike and Dru came out to play.

A common mistake amongst authors — new and experienced — is to make our main character(s) so ‘good’ that they lack depth. That depth tends to then go into secondary characters who end up stealing every scene they’re in because they’re much more interesting and complex than the hero. In other cases, it simply doesn’t make sense for the protagonist to be that twisted. Buffy was a little of both. She didn’t have the luxury of being mad. Buffy had to be responsible and strong and righteous. That doesn’t mean she was always good, however. After all, she seem to have a thing for emotionally unstable men… One of my favorite episodes, though, is the one that had you wondering if Buffy really was a vampire slayer, or a poor delusional girl in a mental hospital. Either way, she’s screwed.

The bottom line is that characters need a balance of unpredictability to go with that predictable behavior. Everyone has a code by which they live, but we’re all capable of horrendous things. However, in a protagonist, that balance needs to be really clear — your narrator needs to be at least a little bit reliable. The most fascinating characters are good people capable of terrible things.

Or not so great people capable of great things. A great example of a recent character who made being twisted work is Captain Jack Sparrow. Not the most heroic of men, but when it comes right down to it, he can usually be depended on to do the right thing — or something that will lead to the right thing.

Xandra tries to be a good person, but sometimes she falls short. She’s not really that nice  — she’s selfish and petulant, and sometimes she’s a raving bitch. There were times when I worried for her sanity, and those were the times I loved her most. The monster in her wants blood and violence and maybe a little song and dance to go with it. In the movie Con Air Steve Buscemi’s character Garland Gray is an absolute nutcase — a psychopathic killer who once wore a victim’s head as a hat. He’s twisted. He’s also the most compelling character in the whole movie, and when he walks away in the end, you’re rooting for him even though you know he’s a monster. In fact, if you want a great example of twisted characters, watch ‘Sons of Anarchy’ — almost every one on that show is exactly the sort of character capable of both good and evil. I think Xandra would feel right at home.

In LONG LIVE THE QUEEN (US | UK | AUS) Xandra comes up against a character even more twisted than herself. I’d be lying if I didn’t say that Ally was incredibly fun to write. She was also heart-breaking. The more whacked I tried to make her, the more attached I became. My favorite characters in the series are the ones that are monsters and accept it — maybe even like it. At the very least, they make no excuses.

LONG LIVE THE QUEEN is out now! Look for it online and in stores everywhere. If you’re new to this series, check out the first book GOD SAVE THE QUEEN (US | UK | AUS).

END_OF_DOCUMENT_TOKEN_TO_BE_REPLACED

I don’t know about other authors, but for me the process of writing a book has always included music. Music provides so much inspiration for me, can really help in capturing the tone or feel of a scene – or an entire book! There are songs that have come to be so associated with one of my stories that I can’t listen to them without thinking of the characters the lyrics have come to represent.

I came into my teens in the 80s – I do not feel that old! – the decade of the music video. I remember seeing ‘Thriller’ for the first time, and staring slack-jawed at the TV as this amazing story played out in front of me. Aha’s ‘Take On Me’ is still one of my all-time favorite videos. The merging of music and story took hold of me and refused to let go.

The first book I ever wrote (I was 12 so be kind!) was about a rock band. OK, it was about Duran Duran, but I changed the names. Over 300 pages of angst and music – I even wrote lyrics, which were awful. To this day, if a song grabs my attention I’m going to think of a story to go along with it – my own little music video playing inside my head. It doesn’t matter if it’s Nine Inch Nails, Bon Jovi or Alice Cooper, if it catches my attention, I’m going to find the plot and play it out in my head. 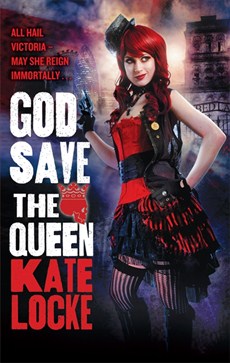 So, it shouldn’t surprise you that the Immortal Empire has a soundtrack behind it. As I plotted and planned, and then began to write, I actually embarked upon a quest to find the the perfect music. I wanted something that was modern, but would make me think of the Victorian Era as well. Then, I discovered Emilie Autumn and I knew I’d found my soundtrack. Not just my soundtrack, but a target audience. At this point I wasn’t certain my weird little book would be of interest to anyone, but then I visited Emilie’s fan boards and realized that there were people out there who would like this sort of book.

I could ramble on and on about music and how it inspires me, and how I’m making a jacket to wear to Emilie’s next concert in New York with all the glee of a 14 year-old dying her bangs to match John Taylor’s, but I think I’ll share some of my playlists with you instead. Here are just a few songs (in no particular order) that I listened to while writing these books. Will they make you think of various scenes or characters in the Immortal Empire? Oh, I’m not going to list songs from LONG LIVE THE QUEEN – I don’t want to give anything away! END_OF_DOCUMENT_TOKEN_TO_BE_REPLACED