Hi Louisa, and welcome to the Orbit team! Can you tell us a bit about SPEAK?

Sure! SPEAK is the story of five characters who are involved in creating an artificially intelligent doll. After these “babybots” are banned, gathered up, and shipped off to the desert, the children who loved them start to stutter and freeze. SPEAK tells the story of the babybots and their creators, from Alan Turing to a traumatized girl in the near future who gives her bot new language. These and other characters are all racing toward a world populated by lifelike machines, in which it’s difficult to decide who’s actually living, and who has real intelligence.

SPEAK has already been featured in Oprah magazine, raved about by Emily St. John Mandel, chosen by Wired and Huffington Post as one of their big books this summer, and is an IndieNext pick too. How does it feel for the book to be getting this much attention?

It seems to be an auspicious time for creative depictions of artificial intelligence. Just recently, all kinds of interesting books and films involving the topic have come out: Ex Machina, Chappie, Channel Four’s Humans, and Ann Leckie’s Ancillary Justice. Technology has radically challenged the ways we understand ourselves as humans: we reveal our secret traumas to artificially intelligent therapists; we relinquish our most personal information to data-mining software; we’re developing robotic soldiers to fight wars in place of humans. Fiction that questions the differences between humans and machines seems particularly important in this historical moment.

At its heart, SPEAK is about the very human need to be listened to, about having a voice, with characters from different times, different places, united by a very singular narrator. How difficult was it to bring this variety of voices to the page?

I actually find it easier to write in many voices than to settle into a single character. I discover so much of my characters in what they don’t see, what they’re unaware of, what they miss about the world around them. Writing in different voices allows me to set up those misunderstandings, and to see characters from new perspectives other than their own.

Some of Alan Turing’s chapters are the most touching and interesting in the book – what sort of research did you do to bring Turing and the other characters to life?

I read five or six biographies of Alan Turing, including Andrew Hodges’ excellent The Enigma, which contains long excerpts from Turing’s letters. That was helpful to me in getting Turing’s voice—his grammar, his diction, etc. The most challenging part of wrapping my head around his character was understanding his theories of computing and mathematics, which were essential to understanding his approach to the world. He couldn’t fully believe in an abstract idea such as the soul unless he’d found a mathematical way to prove its existence, or at least the possibility that it might exist.

Your first novel, the Waterstones Book Club title THE CARRIAGE HOUSE, is a contemporary family drama inspired by your time as a professional squash player. What first got you thinking about artificial intelligence as a subject for your second book?

In THE CARRIAGE HOUSE, I wanted to create a world small enough to control. I limited the novel to a single neighbourhood that was claustrophobic in its self-containment. For my second novel, I wanted to go to the furthest frontiers I could imagine, from religious dissidents in the seventeenth-century to AI inventors in the near future. I wanted to find what was human in foreign situations: robot dolls dying in hangars, a scientist undergoing hormonal manipulation. In the end, most of the book isn’t that far-fetched. Many of the characters are based on real people, and most of the science is closely related to science that already exists. But the book sprang up on the edges of what I understand and what I’ve actually experienced. Sometimes I think that if THE CARRIAGE HOUSE was centripetal, SPEAK is centrifugal. It always seemed to spin a little out of my control.

Bill Gates and Stephen Hawking both recently discussed their anxiety about AI and superintelligent machines. What is turning such giants of the science and technology world against AI, and do you share their concerns?

I tend to be more optimistic about the future of AI, though I realize that Bill Gates and Stephen Hawking are more qualified to make predictions about computers than I am. But their concerns about the future of AI are equally valid when applied to the future of the human race. In reference to autonomous killing machines, for instance, this article asks the following questions: “how will they tell friend from foe? Combatant from civilian? Who will be held accountable?” But the same questions can be asked about human soldiers. Ideally, robots would be able to perform certain tasks better than we can because they won’t be programmed for fear, anger, or vengeance. And because we have those emotions, we’ll be able to perform other tasks better than robots. Of course it’s always possible that some evil empire could program a fleet of maniacal robots, but the same evil empire could also get its hands on nuclear weapons. Our primary anxiety, in my mind, should be less about preventing the development of robots and more about preventing the ascent of unchecked evil empires. That said, I do think it’s worth being hyper-vigilant about the effects AI will have on our economy and the uneven distribution of wealth.

Are there any stories about artificial intelligence that really stand out to you, or inspired you in creating SPEAK?

There are so many recent stories about AI that inspire me. My friend just sent me a story about Aibos, robot dogs that people have adopted as pets. At one point, these robot pets could be repaired if they were damaged, but now they’ve been discontinued. Soon, their replacement parts will be nonexistent. Suddenly the owners of these robot dogs are facing the idea of robot dog mortality. I also recently heard a story about a computer scientist in Wyoming who’s teaching robots how to adjust to injuries by giving them ‘simulated childhoods,’ a period devoted to play in which they learn creative ways of using their bodies. We keep robots as pets; we give our robots childhoods. Stories such as these ones beg so many interesting questions about what it actually means to be living.

SPEAK is released in digital and ANZ export edition this July, with a UK paperback to follow in Feb 2016 – preorder your copy today.

Arriving at Orbit this summer from Waterstones Book Club author Louisa Hall comes SPEAK, a novel which will make readers everywhere question what it really means to be human.

Emily St. John Mandel, Arthur C. Clarke winner and author of STATION ELEVEN, calls SPEAK the ‘rarest of finds’, and it is already one of Huffington Post‘s Brilliant Books You Won’t Want to Miss this Summer. 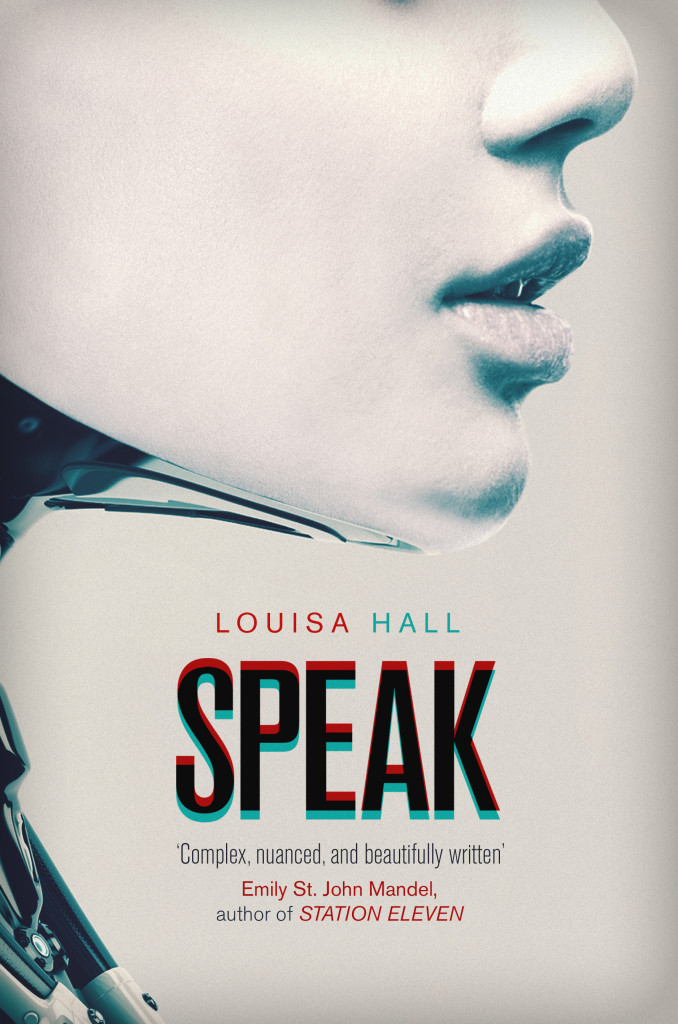 She cannot run. She cannot walk. She cannot even blink. As her batteries run down for the final time, all she can do is speak. Will you listen?

From Alan Turing’s conviction in the 1950s to a Silicon Valley Wunderkind imprisoned in 2040 for creating illegally lifelike dolls. From a pilgrim girl writing her diary to a traumatised young girl exchanging messages with a software program, all these lives have shaped and changed a single artificial intelligence – MARY3. In Speak, she tells you their story, and her own. It the last story she will ever tell, spoken both in celebration and in warning.

When machines learn to speak, who decides what it means to be human?