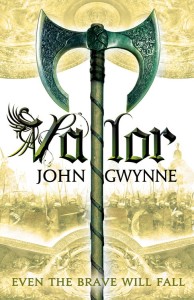 If you love fantasy teaming with rich characters, riveting battles and a vivid world, this is a series that will enthrall you. If you’re going through Game of Thrones withdrawal there is no better cure.

Here’s a selection of amazing praise for Malice:

“A series that promises the same degree of complexity and depth found in Robert Jordan’s Wheel of Time books and George R.R. Martin’s Song of Ice and Fire series.” – Library Journal (Starred Review)

“Influenced by Gemmell’s Rigante and George R.R. Martin’s Game of Thrones….Hell of a debut.” – Conn Iggulden

“Three-dimensional characters, a gripping plot, and a world that became real to me….this is the type of fantasy I love to read and I truly can’t wait to read the next volume in The Faith and the Fallen!” – Fantasy Book Critic

“John Gwynne hits all the right spots in his epic tale of good versus evil….there’s a lot of pleasure to be had in is debut novel; Gwynne is definitely one to watch.” – SFX

“Warring clans, sleeping giants, Banished Lands and omens and portents… a strong contender for ‘if you like Game of Thrones, why not try this?’ award.” – Independent (UK)

A month ago John Gwynne won the David Gemmell Morningstar Award for his debut novel, MALICE, and we’re thrilled to be able to bring this story to US readers now. To find out more about John and the excellent worldbuilding that he brings to the table, check out the interview below.

Your book has several viewpoint characters. How did you structure your writing process to tie their stories together?

Writing MALICE was one big learning curve – it began as a hobby and grew slowly into something bigger. Initially I had no thoughts of being published, I was just writing for my own entertainment, with the only likely readership being my wife and children, and perhaps the odd overly-polite friend. I wrote multiple POV because that is my favourite type of read – most of my decisions were made that way – I like seeing a story from different angles, and enjoy it when diverse characters come together.

As far as how I wrote the multiple points of view, I mapped out the big picture first – the general brush-strokes of the overall plot, breaking it down into the major strands and plot arcs. Then I put some thought into the characters that I would like to view the tale through. After that I started writing. It was a bit like letting a bunch of hounds off of the leash, watching them sprint off, paths diverging and intertwining, some going off in very unexpected directions, but I knew there were key events at certain points down the line that would bring them together, some of them quite explosively.