First she had us on the run from zombies. Now Mira Grant is delving into the dangers that might hiding inside our own bodies.

You can get a taste of PARASITE in this excerpt at Popular Science. And, if you’re on the west coast, Mira may be coming to your city when PARASITE is released! Details of the tour are below.

“Imagine a world without costly prescription drugs. Where useless diets, insulin checks, and allergies are a thing of the past.”

SymboGen wants to tell you all about their new product, the Intestinal Bodyguard, which has been hailed as the next step in human evolution, but do we trust them? Head over to Symbogen.net today for more information or follow them on Twitter. 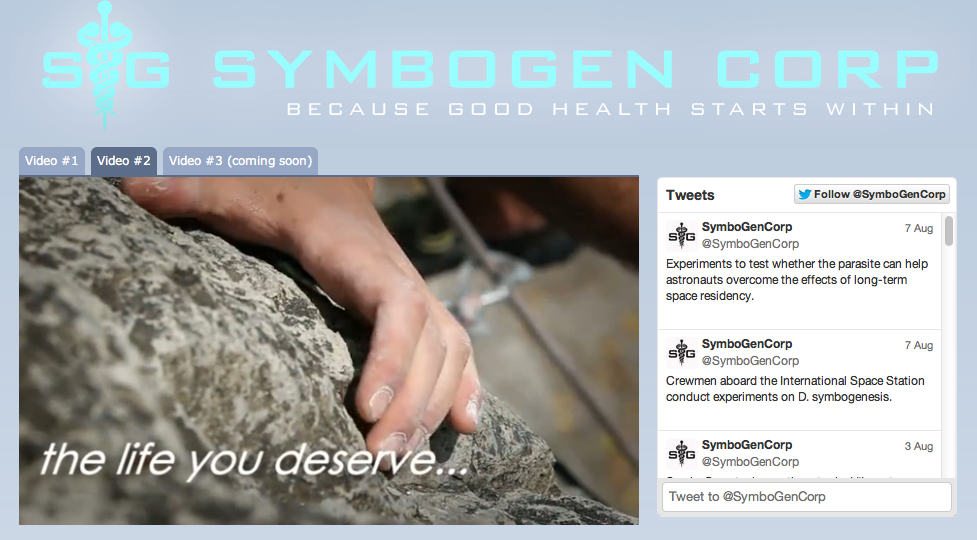 “Grant extends the zombie theme of her Newsflesh trilogy to incorporate thoughtful reflections on biomedical issues that are both ominously challenging and eerily plausible. Sally is a complex, compassionate character, well suited to this exploration of trust, uncertainty, and the price of progress.” — Publishers Weekly (starred review)

“Readers with strong stomachs will welcome this unusual take on the future.” — Kirkus

“The first book of this ominous duology blends sci-fi imagination with the terrifying authenticity of horror then delivers like a creeping thriller, getting under your skin in a very good way.” — Amazon Big Fall Preview List 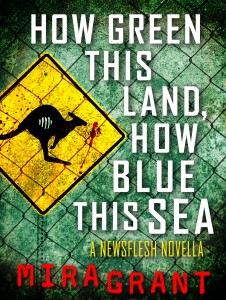 The Newsflesh trilogy was, by and large, the story of a post-zombie America. The apocalypse had come, we had survived and even thrived in our own weird way, and now it was time to follow first a Presidential campaign and now the backlash from same as it unfolded. There were hints throughout the books of the way the Rising had treated and continued to treat other countries–London was still standing, large swaths of Canada had been abandoned, almost the entire Indian sub-continent was currently considered “lost”–but the nature of the story I was telling in those books meant that we were somewhat geographically constrained. Meanwhile, the entire world was dealing with the Kellis-Amberlee virus, and the resulting “whoops we accidentally raised the dead” issues that came with it.

Now, for what looks like a total subject change:

I love venomous snakes. I think they’re beautiful, fascinating, and worthy of study. Which naturally means that I love Australia, a continent which contains more venomous snakes than anybody really needs (even me). Visiting Australia in 2010 was the culmination of a life-long dream, and I immediately (as is my wont) started contemplating how Australia would deal with the Rising. Probably like everybody else, I decided: running, screaming, dying, and gunfire. Not necessarily a story that needed to be told.

Ah, but how would they deal with things after the Rising? From that question came HOW GREEN THIS LAND, HOW BLUE THIS SEA (US | UK) which I literally described as “animal husbandry in Australia, with zombies” whenever anyone asked me what it was going to be about. That was, of course, the simple answer. It’s about perception versus reality; safety versus freedom; what constitutes an acceptable risk; what lines have to be drawn between humanity and the natural world; and zombie kangaroos. The zombie kangaroos are, of course, key.

If you haven’t read the Newsflesh books, you probably shouldn’t read HOW GREEN THIS LAND, HOW BLUE THIS SEA. Unlike the previous two novellas set in this universe (COUNTDOWN [US | UK] and “SAN DIEGO 2014: THE LAST STAND OF THE CALIFORNIA BROWNCOATS [US | UK]), this isn’t about what came before the series: it’s about one of the things that came after, and while not every character who made it through the trilogy alive shows up “onscreen,” most of them are mentioned at least in passing. You most definitely can read it anyway–nobody’s going to stop you, least of all me–but I think you might be happier if you read the books first.

If you have read the Newsflesh books, this is your opportunity to follow Mahir Gowda into a part of the post-zombie world that you haven’t seen before, and watch him try to deal with it without just turning around and going back to bed.

I like it quite a lot. I hope that you will, too.

HOW GREEN THIS LAND, HOW BLUE THIS SEA is available now in the US and on July 17th in the UK.

Yes, Orbit is going to SDCC next week — and so are some of our authors! Our schedule of signings and panels is below.

We’ll be in booth #1116, and we’ll have some neat swag to give away even when nothing else is going on. Stop by and say hi!

Get ready to put those survival skills to the test and return to the world of the bestselling Newsflesh Trilogy. HOW GREEN THIS LAND, HOW BLUE THIS SEA is an all new digital novella by Mira Grant, but this time we’re headed to the outback. And yes, yes that is a zombie kangaroo (thus setting a new definition for the word awesome). Check out the cover and synopsis below, and pre-order your copy today from your preferred retailer. 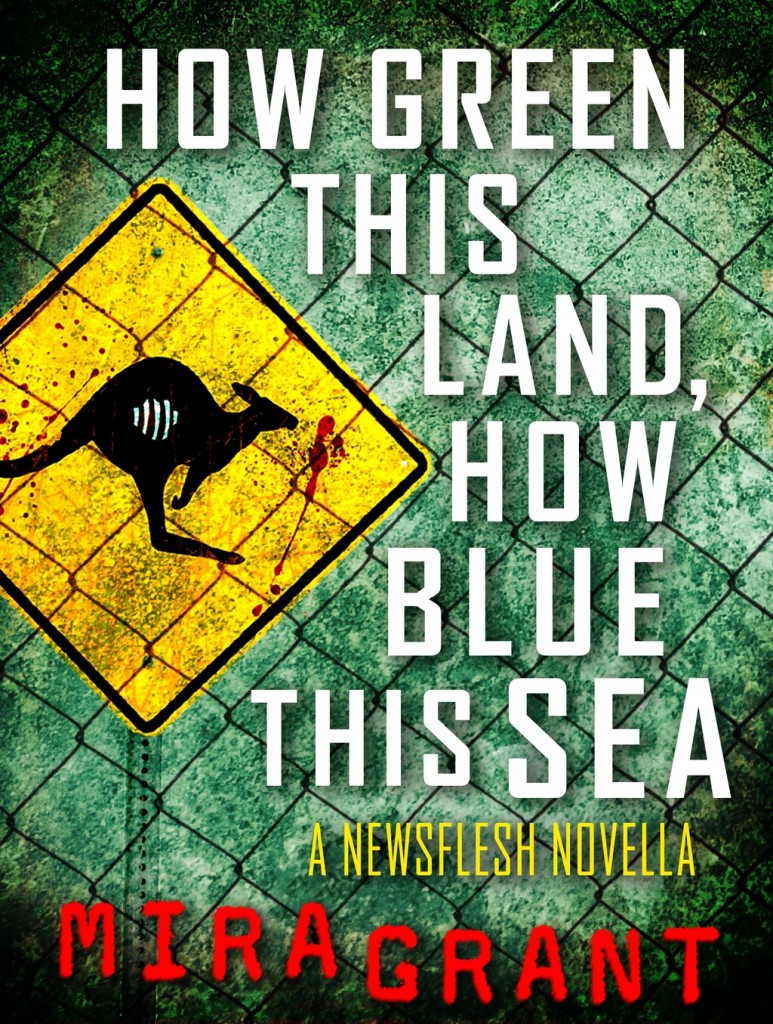 Synopsis: Post-Rising Australia can be a dangerous place, especially if you’re a member of the government-sponsored Australia Conservation Corps, a group of people dedicated to preserving their continent’s natural wealth until a cure can be found. Between the zombie kangaroos at the fences and the zombie elephant seals turning the penguin rookery at Prince Phillip Island into a slaughterhouse, the work of an animal conservationist is truly never done–and is often done at the end of a sniper rifle.

A decade in the future, humanity thrives in the absence of sickness and disease. We owe our good health to a humble parasite – a genetically engineered tapeworm developed by the pioneering SymboGen Corporation.

This Fall Mira Grant debuts in hardcover with PARASITE (US | UK) – a new series from the bestselling author of the Newsflesh Trilogy. In anticipation of the big release, SymboGen is opening its doors to you.

Visit SymboGen.net for news and product information about the revolutionary Intestinal Bodyguard or follow the corporation on Twitter. On the website, you’ll also be able to pre-order your copy of PARASITE and sign-up for alerts about Mira Grant’s publishing activity.

For those of you attending BEA today, we’re giving away galleys of PARASITE and antibacterial hand sanitizer while supplies last. Look for the “friendly” SymboGen staff at booth #1828 for assistance. 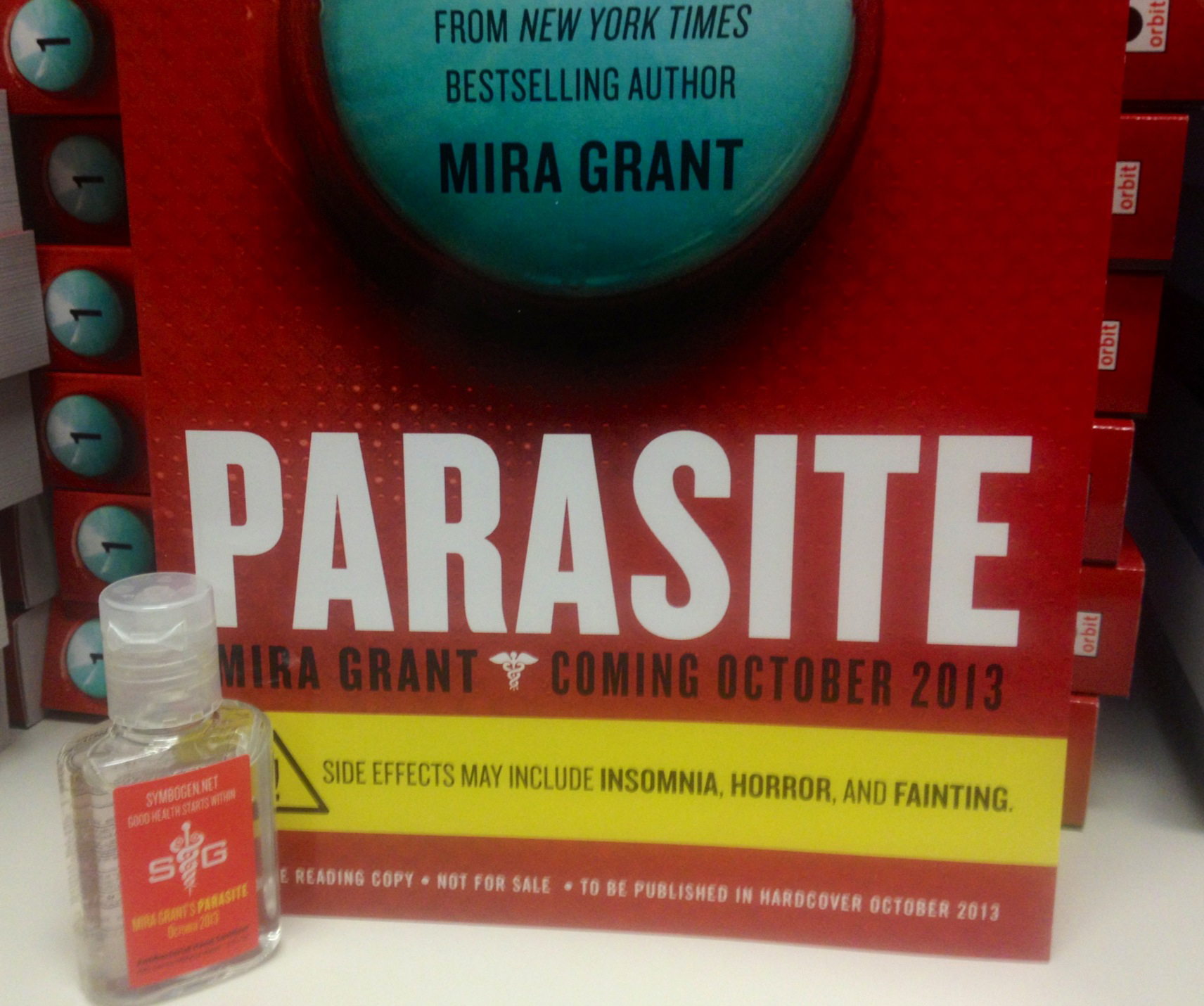 In two weeks, the Nebula Awards Weekend will be taking place in San Jose, CA. Best of luck to all the nominees, but especially Kim Stanley Robinson and N.K. Jemisin, who both have works nominated for Best Novel this year! Here are some of the other conventions and events where you’ll find Orbit authors this month.

May 22: Catch Mur Lafferty, author of The Shambling Guide to New York City, in an online event at Shindig! More details here. 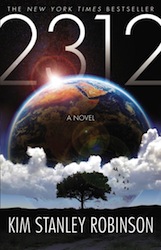 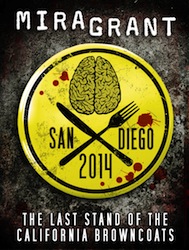 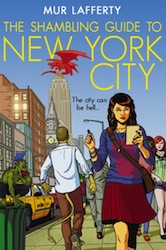