Going to the RT Booklovers Convention? If so, you’ll run into some Orbit authors: Nicole Peeler, Kristen Painter, and Jaye Wells will be there, as well as new Orbit authors Amanda Carlson (whose Full Blooded [US | UK ] will be out in September) and Kate Locke (whose God Save the Queen [US | UK | ANZ] hits stores in August)! It runs April 11-15th in Rosemont, IL.

Also, Gail Carriger will be touring across Europe this month! Her UK tour runs from April 8-14th, and then she’ll hit Stockholm, Budapest, and Barcelona. More details available at Gail’s website.

Friday 13th April: Steampunk Night at Waterstones, Nottingham ~ To commence at 6.30pm with Pimm’s & cake for a 7pm start. Special guest Jema Hewitt (author of Steampunk Emporium) and friends will be frequenting the event in full costume.

And finally, in the UK, EasterCon is this weekend, 6th to 9th April, at Heathrow, with Guest of Honour Tricia Sullivan; and Alt.Fiction is the following weekend, 14th and 15th April, in Leicester, with special guest Ken MacLeod.

Released this month in the UK, Australia and NZ are Tempest Rising (UK│ANZ) and Tracking the Tempest (UK│ANZ) – with a spangly new cover style. They’re books one and two in Nicole Peeler‘s sexy storm of a series, the Jane True novels. Books three and four, Tempest’s Legacy (UK│ANZ) and Eye of the Tempest (UK│ANZ), will follow hot on their heels this September and October respectively. So not long to wait to get your urban-fantasy-grabbing mitts on them!

Two weeks ago we ran a Twitter competition for UK readers to vote for their favourite of the above four covers. The result was Tempest Rising – good news as it’s the perfect place to dive into the world of supernatural halfling Jane True. You’ll see her coming to grips with her new-found powers over water (not to mention coming to grips with the rather dashing members of the supernatural community she meets for the first time…). The winner of the competition was Julie Fallon – congrats! Copies of the first four books will be winging (or more appropriately: swimming?) their way to you soon.

END_OF_DOCUMENT_TOKEN_TO_BE_REPLACED 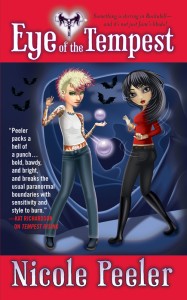 One thing I love about our Orbit roster is our kickass heroines (often written by real-life kickass ladies)…but they’re not JUST kickass. (Ok, not allowed to say “kickass” for the rest of the post, promise.) Our heroines have unique voices and over the course of a series begin to feel utterly real. Sometimes when I am working on covers I literally hear a voice of a character in my head saying yea or nay. Now, I don’t create the art for Nicole Peeler’s Jane True books in the US, but I know illustrator Sharon Tancredi has got a little Jane inside her egging her on. I was so excited to see Blondie make the cover of Eye of the Tempest, Jane’s fourth adventure, and she looks like a fabulous teammate for Jane. Of course, it is known I have a soft spot for cool tattoos…and to really help our dynamic duo pop, we upped the boldness with a bright shock of red for the title bar. I’m also going to show the back cover, which I rarely do, but you must see the fantastic octopus Sharon created to go with the cover!

After the jump, get to see the US back cover and the requisite teaser text…..and if you haven’t met Jane True yet, you really must pick up the rest of the series…here’s a fabulous review from B&N to whet your appetite…True Love: Nicole Peeler’s Selkie-Halfling Heroine Jane True is Paranormal Fantasy’s “It Girl”

END_OF_DOCUMENT_TOKEN_TO_BE_REPLACED

OK – we admit it. The UK and Australian readers have been getting a raw deal, having to wait for Nicole Peeler‘s sweet, sassy and sexy urban fantasy series to float their way, whilst the US readers have been bathing in its glory for a few months. But now the wait is over, and Tempest Rising (UK | US | ANZ) and Tracking the Tempest (UK | US | ANZ) have finally washed up on our shores all at once. Featuring the naughty scrumpet Jane True as our half-selkie heroine – think of it as Sookie Stackhouse meets Splash!

Nicole was over in the UK recently and, in what’s becoming a bit of an Orbit UK habit, we took her aside to cross-examine her about her series and the Urban Fantasy genre. She is an assistant professor of literature, so she should know her stuff after all!  Take a look at the video below (and excuse my sniggering at points in the background – this lady cracks me up!)

You can read an extract of Tempest Rising here.

Tweet-log of  Gabriella Gossip, Houston’s top social columnist-on-the-move. She snarks directly at the source, so you don’t have to! Last Saturday, we sent Gabriella to check out some of the hottest writers in the hottest new genre around . . . Urban Fantasy! It’s . . . um . . . urban! And fantasy!

[@gabgoss Sat 24 April 4:45 via TweetGasm] I’ve been sent to Murder By The Book to attend @GailCarriger, @JayeWells, and @NicolePeeler’s signing. No real celebs in town, obviously.

[@gabgoss Sat 24 April 4:58 via TweetGasm] I want a drink. Oh wait, the shindig is finally beginning. Thank the lawd. 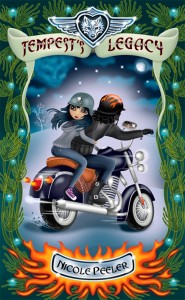 Are you reading the Jane True series yet? Because you really should be. Nicole Peeler is one of my favorite Orbit authors and Tempest Rising was such a great debut novel from a great new voice in urban fantasy. And I know I’ve said it before, but I think the covers Sharon Tancredi has been illustrating are just perfect for this series. Quirky, unique, cool in a slightly odd way…just like Jane True.

END_OF_DOCUMENT_TOKEN_TO_BE_REPLACED 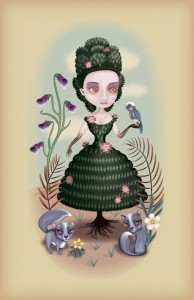 I wanted to direct you art fans out there over to an interview that the blog DarkFaerieTales.com did with one of my favorite Orbit illustrators, Sharon Tancredi. You’ll recognize Sharon’s work immediately if you’ve seen Nicole Peeler’s Jane True series. I’ve just received the art from Sharon for Jane True #3 and it’s fantastic! We’ll be launching the cover here soon. But for now, check out the interview and some of Sharon’s other work. (I love her fine art pieces.) END_OF_DOCUMENT_TOKEN_TO_BE_REPLACED

Nicole Peeler’s character Jane True thought it might be a good idea to get some pointers on being an urban fantasy heroine from Gail Carriger’s character Alexia Tarabotti.

They met. They talked. See for yourself.

Selkies and the soulless have an awful lot to talk about, don’t you know, so this is but part one — their lively repartee regarding tea, underclothes, those remarks involving “doggies” that tend to leave Alexia baffled etc. will continue, here. 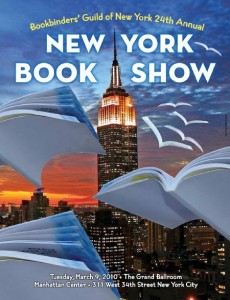 The New York Book Show is an annual competition held by the Bookbinders’ Guild of New York, which is a professional publishing organization focusing on design & production of all kinds of trade, academic, and specialty books. It’s one of the few design competitions every year that focuses just on books, and I entered some of our Orbit titles from 2009.

The judging was just completed, and Soulless by Gail Carriger & Tempest Rising by Nicole Peeler both won in the mass market paperback cover design category. Thanks to everyone who was involved in the cover designs, especially Donna Ricci, our model for Alexia Tarabotti & mistress of all things Steampunk Fashion, and Sharon Tancredi, the illustrator for Tempest Rising. Go Team!