Ever since I can remember I’ve been a lover of Westerns.  From the big themes, big characters and big landscapes of John Ford, through the exaggerated sweat, filth and violence of Sergio Leone, to the used up gunmen and moral ambiguity of Clint Eastwood’s revisionist films.  In fact I often site Unforgiven as doing expertly with the western what I try to do with fantasy – to present a modern, gritty, realistic take on a classic form, to perhaps say something about that form and the purposes it serves for audiences, but chiefly to present a great example of the form with all the entertainment value audiences expect.

When you ill-advisedly set out to write a trilogy of big books, finishing seems an impossible goal.  You spare very little thought for what might come after.  But shortly before finishing The First Law trilogy, I came to the horrifying realisation that if I was interested in writing as a career I might need to write another thirty or more books.  I needed some ideas, and fast, and of course the best place to get them is to steal some that have already been successful.  I wanted to write some tighter, more focused stories that continued in the same world but to some extent stood alone, and so I went to films for inspiration, and tried to work out what I liked about some of my favourites with the aim of combining my take on fantasy with some other styles of story.  So BEST SERVED COLD (US | AUS) was my attempt to fuse fantasy with a gangster revenge story.  The Heroes was my attempt to write a fantasy account of a single great battle.  And RED COUNTRY (US | AUS) was my attempt to fuse fantasy and western.

Fantasy and westerns aren’t such obvious bedfellows as fantasy and revenge or fantasy and battles, mind you.  The western is indivisibly tied to its time and place and in a way is a very strong spice for the reader, summoning up lots of powerful and specific visuals and expectations, one which has to be used with care.  For me the essence of the western isn’t in the sixguns and the chaps, the stetsons and the canvas wagons, the saddles and saloons, though.  It’s the wild frontier.  It’s the place where civilisation and savagery mix, where the rule of law contends with the law of the jungle, where anything is possible.  It’s about tough men and women pitted against an unforgiving wilderness.  It’s about conflicted men and women struggling to find the right thing to do in a lawless country.  And, yes, it’s about narrow-eyed stand-offs in windswept streets while coat-tails flap and terrified observers hold their breaths.  In RED COUNTRY I tried to keep what was essential about the western while changing the trappings, if you like: staking out a wild frontier in a part of the First Law world where the first settlers are just beginning to seek out new opportunities in an untamed wilderness, and finding neither man nor nature especially welcoming.  And, yes, there is a knife fight on the roof of a speeding wagon.  Whatever could be wrong with that?”

END_OF_DOCUMENT_TOKEN_TO_BE_REPLACED 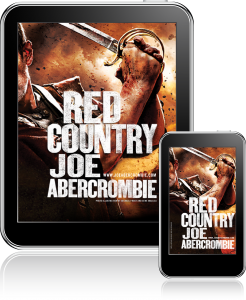 Forget about White Christmas this season.  Make it a Red Christmas by decorating your computer and favorite electronic devices with these fabulous wallpapers with art from RED COUNTRY – Joe Abercrombie’s bestselling, new novel.

Here’s all the  download links, and if anyone needs a specific dimension made, let us know!

Were you able to participate in Joe’s Ask-Me-Annything on Reddit yesterday? Catch up on his answers to a ton of great fan questions here. 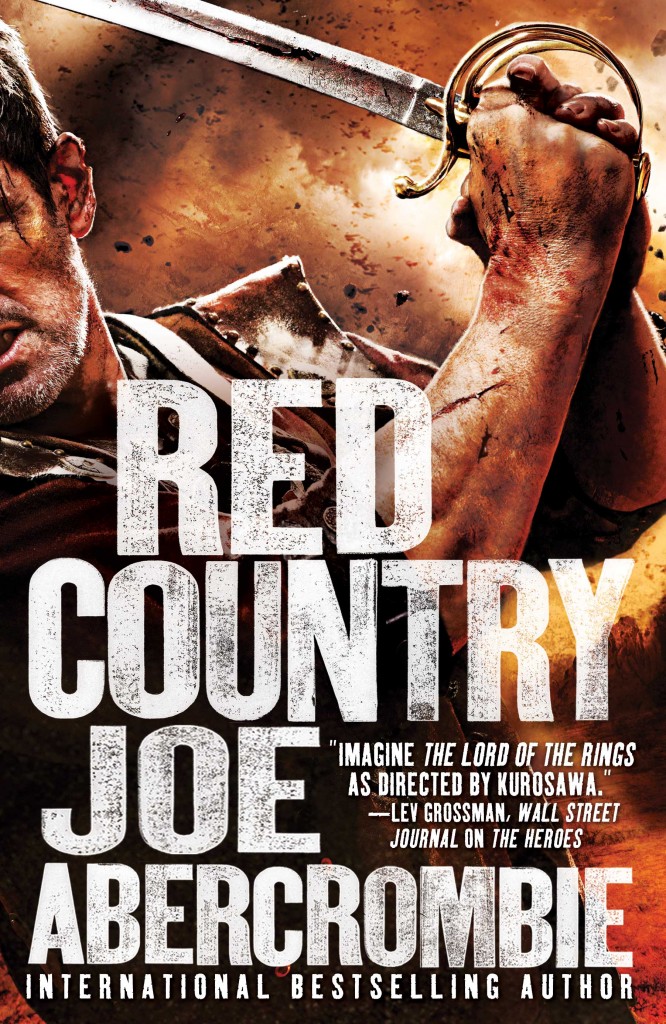 Fiction, and indeed real life, brims over with important folks without the full compliment of digits.  Here’s ten of them.  Alright, nine.

The villain of the Lord of the Rings, Frodo Baggins, is immortalised by the bards as ‘Frodo of the Nine Fingers.’  The hero of the story, Gollum, is forced to chew off Frodo’s ring finger, nobly sacrificing himself to destroy the One Ring, after Frodo tries to claim it and usher in a new age of darkness over Middle Earth.  It’s a bleak and savage ending but, hey, who gets what they deserve?

The notorious Missouri outlaw is said to have accidently blown off the end of his left middle finger while cleaning his pistol during the American Civil War.  After his murder by Robert Ford, the fact that his body was photographed with the right hand apparently hiding this identifying feature sparked rumours that he was a stand-in, and that James had in fact survived.  He hadn’t.

One of A Song of Ice and Fire’s best loved characters, the so called Onion Knight was once an infamous smuggler, but risked his life to bring food to the besieged Stannis Baratheon.  After the siege was lifted, Stannis knighted Davos as a reward.  Not strictly nine-fingered, but he certainly doesn’t have all ten, as Stannis also ordered the ends of all the fingers on his left hand cut off as punishment for the smuggling.  He now wears the bones in a bag round his neck.  A hard man to please, that Stannis…

Original Star Trekker James Doohan lost a middle finger in heroic action during the Normandy landings.  Efforts were made on the show to conceal the injury, including frequent use of a hand-double at the transporter controls, but in his guest appearance in The Next Generation episode, “Relics”, the missing digit was briefly visible.

END_OF_DOCUMENT_TOKEN_TO_BE_REPLACED

If you can’t wait until October, you can read an excerpt of RED COUNTRY on Joe Abercrombie’s website.

We’re super excited to publish RED COUNTRY  this fall. Our new on sale date is October 23, 2012 and we hope you love a sneak peak at this awesome description newly minted by Joe! 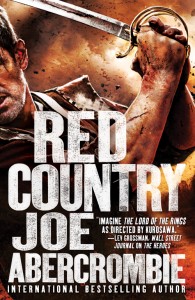 They burned her home.

They stole her brother and sister.

But vengeance is following.

Shy South hoped to bury her bloody past and ride away smiling, but she’ll have to sharpen up some bad old ways to get her family back, and she’s not a woman to flinch from what needs doing.  She sets off in pursuit with only a pair of oxen and her cowardly old step father Lamb for company.  But it turns out Lamb’s buried a bloody past of his own.  And out in the lawless Far Country the past never stays buried.

Their journey will take them across the barren plains to a frontier town gripped by gold fever, through feud, duel and massacre, high into the unmapped mountains to a reckoning with the Ghosts.  Even worse, it will force them into alliance with Nicomo Cosca, infamous soldier of fortune, and his feckless lawyer Temple, two men no one should ever have to trust . . .