Bree and Kael Skyborn’s rebellion is coming to its action-packed end, and we can’t wait for you to read it! While you wait impatiently for the final book in the SERAPHIM trilogy to come out in November 2017, feast your eyes on this fantastic cover for SHADOWBORN, designed by Lauren Panepinto & Kirk Benshoff and with illustration by Tommy Arnold. 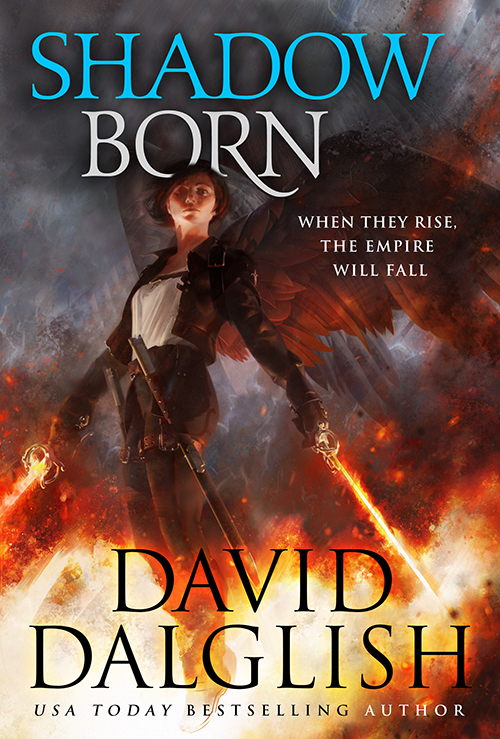 What started as a small rebellion has grown to all-out war, with the four minor islands uniting under the call for independence. But Kael Skyborn no longer trusts the mysterious leader of their rebellion, nor his disciples.

Bree Skyborn is the Phoenix of Weshern and the face of the rebellion. But when the enemy captures Kael, Bree no longer cares about the war or the call for independence. All that matters is rescuing her brother and putting a stop to the violence for once and for all.

Both sides hold secrets that could be their undoing.

I was fortunate enough to art direct David’s first series, the Shadowdance novels, so when I heard we were ready to work on his next series I was super excited. SKYBORN (US | UK | AUS)  is about the Seraphim, an elite military force protecting a floating island of Weshern. The Seraphim guard the remnants of mankind, defying gravity using ancient wings and mastering powerful elements to wage war in the skies.

The new series has been a different design challenge from the Shadowdance books in that we wanted to convey a different feel for the cover art. In David’s first series, we wanted emphasis on the main character, a ninja-like assassin, and the books’ energetic action. In Skyborn, the characters are a bit more unique in that they have metal wings to fly, wield swords, and wear military uniforms. Ultimately, the new series needed to convey high adventure.

In what I would call serendipitous timing, the work of Tommy Arnold came across my desk as we were discussing the covers. His style just hit the nail on the head for this project. His ability to illustrate characters was spot on. He could also handle textures beautifully: fabrics, metals, flames, etc. And most importantly, his illustrations really pull the viewer in and engage you. It was a no brainer in reaching out to get Tommy on board.

So after settling on what we wanted for the covers, we got Tommy moving. I couldn’t have had more fun designing David’s super fun new series with such a talented artist!

I’m thrilled to present the cover to Skyborn by David Dalglish! 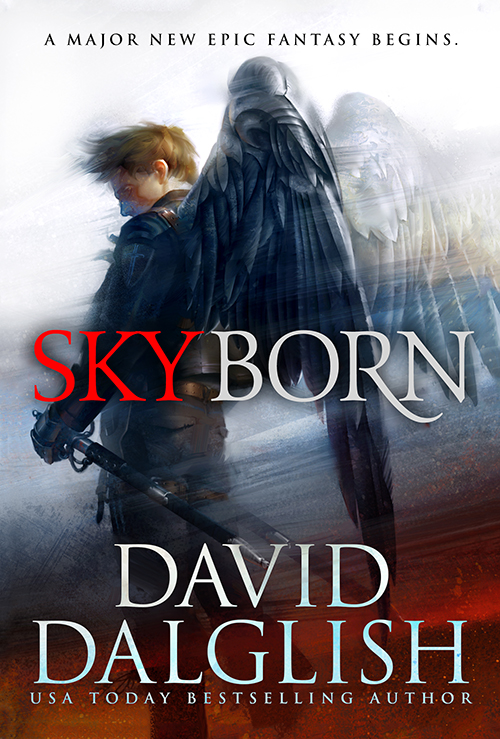 Skyborn, the first volume of a new series by David Dalglish, will be hitting shelves November 2015. 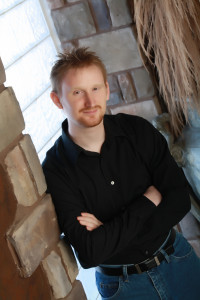 Today, Orbit US & UK are very excited to announce the international acquisition of a new trilogy called the Seraphim by David Dalglish, author of the Shadowdance novels. We’ll be publishing the first, Skyborn, this November. I asked David to tell me about about why he is so excited about.

“With, I get to start from scratch in a brand new world, and try out ideas that wouldn’t work in a more traditional fantasy setting. But not everything’s changing. I love throwing fireballs around, and I love intricate sword fights. It’s what I do. It’s what I’m good at. In the Seraphim books, you’ll experience aerial battles at break-neck speed between elite soldiers flinging ice and fire and lightning at one another before clashing with their blades. How can you not have fun with that?”

Sounds good? I know! You can’t wait till November? Don’t worry. I’m reading it now and I’m telling you — its worth the wait!