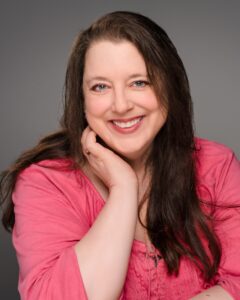 Here at Orbit we love sword-wielding warrior women, slow burn romances, powerful dragons, and epic, feminist myth retellings. What if we told you we just bought a book that has all four? Orbit is thrilled to announce that we’ll be publishing Shield Maiden by Sharon Emmerichs in the US. Get ready for a lush, epic fantasy tale about a young woman reclaiming her power that will upend everything you think you know about Beowulf.

Fryda has grown up hearing tales of her uncle, King Beowulf, and his spectacular defeat of the monstrous Grendel. Her one desire is to become a shield maiden in her own right, but a terrible accident during her childhood has thwarted this dream. Yet still, somehow, she feels an uncontrollable power begin to rise within herself.

The last thing Fryda wants is to be forced into a political marriage, especially as her heart belongs to her lifelong friend, Theow. However, as foreign kings and chieftains descend upon her home to celebrate Beowulf’s fifty years as the king of Geatland, the partnership begins to seem inevitable.

That is, until, amidst the lavish gifts and drunken revelry, a discovery is made that threatens the safety of Fryda’s entire clan—and her own life. Incensed by this betrayal, Fryda resolves to fight for her people no matter the cost. As a queen should. As a shield maiden would.

And as the perilous situation worsens, Fryda’s powers seem only to grow stronger. But she is not the only one to feel the effects of her new-found battle-magic. For, buried deep in her gilded lair, a dragon is drawn to Fryda’s untamed power, and is slowly awakening from a long, cursed sleep…

Get excited for the book to publish in Fall 2023, and in the meantime, make sure to say hello to the author Sharon Emmerichs on Twitter @Dragonwriter1, on Facebook, or on her website.