Publishers Weekly announced their list of the best books of the year today, including two of our own! Both Robert Jackson Bennett’s THE TROUPE (US | UK | ANZ) and N.K. Jemisin’s THE KILLING MOON (US | UK | ANZ) were awarded accolades in the SF/Fantasy/Horror category.

There are books that come along that I don’t just thoroughly enjoy, but that I feel intensely, overwhelmingly privileged to work on. THE SHADOWED SUN is one of those novels.

I don’t need to tell everyone what a stunning high fantasy writer N. K. Jemisin is. Her talents are already widely acknowledged, given that her debut novel THE HUNDRED THOUSAND KINGDOMS (UK | US | ANZ) was nominated for pretty much every fantasy award out there.

But even so, I underestimated just how utterly captivated I would be by THE KILLING MOON (UK | US | ANZ) and THE SHADOWED SUN (UK | US | ANZ ), books 1 and 2 in the Dreamblood duology. I didn’t think anything could top the Inheritance novels, but if it’s possible I was even more intoxicated. I09 seemed to agree when they said:

The Dreamblood duology is sure to cement Jemisin’s place as one of the most exciting and innovative new fantasy authors of recent years.

There’s something beautifully poetic about a little girl’s dreams becoming a plague upon a city.

Both novels in the Dreamblood duology are based around a religion of dreaming. It’s a dual world, where the realm of dreams is as real a place as the realm of waking. Where a soul that wonders in the dreamworld can find peace or be lost to ever-lasting torment.

In the city of Gujaareh, the priests of the dream goddess are able to harness the magic of the sleeping mind. These priests are both revered and feared, as they can use this gathered magic to either to heal . . . or kill those judged corrupt. And they move silently across the rooftops of the city at night to administer the chosen judgements. END_OF_DOCUMENT_TOKEN_TO_BE_REPLACED 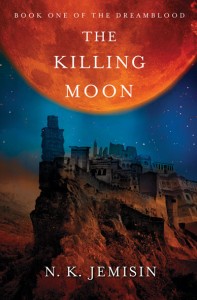 At the end of 2010, a manuscript dropped into my inbox. It was from Lucienne Diver, who said that it “knocked her socks off.”

I was curious as I do love Lucienne’s taste (being the agent for Carol Berg, Lynn Flewelling, & Rachel Caine to name a few). I was slow to realize that this Nora’s next novel that she’d been working on!

Nora , whom some of you might know better as N.K. Jemisin, is the Locus Award-winning and World-Fantasy, Hugo & Nebula nominated author of The Hundred Thousand Kingdoms, The Broken Kingdoms & The Kingdom of Gods.

The novel that was then newly submitted eventually came to be called THE KILLING MOON (US/UK/AUS) and it was everything Lucienne said and more. Exotic, thrilling and thoroughly mesmerizing, it will, even more than her first three novels, establish her as a writer to watch. But don’t trust me – just check out the early praise below!

“The Killing Moon is a great tale of magic, religion and war but it’s also a story of all the hard lessons and choices growing up entails, no matter how old you are in terms of years. Beautifully written and brought to life The Dreamblood duology is sure to cement Jemisin’s place as one of the most exciting and innovative new fantasy authors of recent years.”

“Jemisin’s gripping series launch immerses readers in an unfamiliar but enthralling world as well as a rousing political and supernatural adventure.”

If you’d like a bit more about the novel:

In the ancient city-state of Gujaareh, peace is the only law. Upon its rooftops and amongst the shadows of its cobbled streets wait the Gatherers – the keepers of this peace. Priests of the dream-goddess, their duty is to harvest the magic of the sleeping mind and use it to heal, soothe . . . and kill those judged corrupt.

But when a conspiracy blooms within Gujaareh’s great temple, Ehiru – the most famous of the city’s Gatherers – must question everything he knows. Someone, or something, is stalking its prey both in Gujaareh’s alleys and the realm of dreams. Ehiru must now protect the woman he was sent to kill – or watch the city be devoured by war and forbidden magic.

And read the first chapter here! 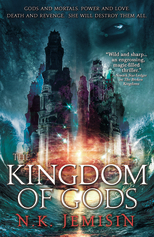