Congratulations go to N. K. Jemisin as THE STONE SKY (US | UK | AUS) hit both the New York Times and the USA Today bestseller lists this week!

And, there’s even more good news to share. THE FIFTH SEASON (US | UK | AUS) is now in production for a television series at TNT. The project is in development with Leigh Dana Jackson (24: Legacy, Sleepy Hollow) writing the adaptation.

The Fifth Season blew critics away with rave reviews, and The Stone Sky continues to impress readers. Here’s a sample of what they’re saying:

“The depth and breadth of Jemisin’s achievement with this trilogy is geologic. These books are a revolution in which I want to take part.” — NPR Books

“Jemisin deliberately refuses to provide easy answers: they’re simply not available, in this world our ours. Painful and powerful.”— Kirkus (starred review)

“Vivid characters, a tautly constructed plot, and outstanding worldbuilding meld into an impressive and timely story of abused, grieving survivors fighting to fix themselves and save the remnants of their shattered home.” — Publishers Weekly (starred review)

Congratulations to the nominees for the 2016 Nebula Award — including our own N.K. Jemisin! THE OBELISK GATE (US | UK | ANZ) is on the shortlist for the Nebula Award for Best Novel. The full Best Novel slate:

You can see the rest of the nominees at SFWA’s website.

THE OBELISK GATE is the sequel to Jemisin’s THE FIFTH SEASON (US | UK | ANZ), which was also nominated for the Nebula Award, and won the Hugo Award for Best Novel. The concluding volume of the trilogy, THE STONE SKY (US | UK) will be published in August.

We are excited to release the cover for THE OBELISK GATE, which was launched at The Mary Sue earlier this week.  This is the second novel in the Broken Earth series by N. K. Jemisin, and we know that you’ll love it as much as you did the first novel, THE FIFTH SEASON (US | UK | AUS). The Obelisk Gate continues the story of Essun and Alabaster as each continue their search.  A post-apocalyptic fantasy at its core, this is a novel of the end of the world, of secrets revealed and of betrayals that still scar the land.

THIS IS THE WAY THE WORLD ENDS… FOR THE LAST TIME.

The season of endings grows darker as civilization fades into the long cold night.  Alabaster Tenring — madman, world-crusher, savior — has returned with a mission:  to train his successor, and thus seal the fate of the Stillness forever.

It continues with a lost daughter, found by the enemy.

It continues with the obelisks, and an ancient mystery converging on answers at last.

The Stillness is the wall which stands against the flow of tradition, the spark of hope long buried under the thickening ashfall. And it will not be broken.

Check out what reviewers have been saying about The Fifth Season: 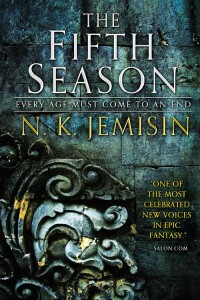 “[Jemisin has packed] sumptuous detail and dimensionality… into her premise. … Jemisin maintains a gripping voice and an emotional core that not only carries the story through its complicated setting, but sets things up for even more staggering revelations to come.”

“Elegiac, complex, and intriguing…. Jemisin’s graceful prose and gritty setting provide the perfect backdrop for this fascinating tale of determined characters fighting to save a doomed world.”

“Jemisin might just be the best world builder out there right now…. [She] is a master at what she does.”

“[The Fifth Season is] an ambitious book, with a shifting point of view, and a protagonist whose full complexity doesn’t become apparent till toward the end of the novel.”