Publishers Weekly announced their list of the best books of the year today, including two of our own! Both Robert Jackson Bennett’s THE TROUPE (US | UK | ANZ) and N.K. Jemisin’s THE KILLING MOON (US | UK | ANZ) were awarded accolades in the SF/Fantasy/Horror category. 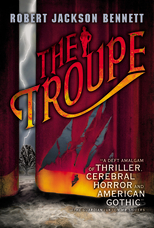 Releasing today is Robert J. Bennett’s third novel, THE TROUPE (US | UK | ANZ), set during the Vaudeville era –  a surreal and defining period in the history of American entertainment.

Sixteen-year-old pianist George Carole has joined vaudeville for one reason only: to find the man he suspects to be his father, the great Heironomo Silenus. Yet as he chases down his father’s troupe, he begins to understand that their performances are strange even for vaudeville: for wherever they happen to tour, the very nature of the world seems to change.

Already THE TROUPE has received wonderful support from reviewers and bloggers.

“Narrated perfectly by a baffled young man whose zealous pursuit of a father’s love is often outpaced by his alternately endearing and dangerous vanity, Bennett’s finely crafted novel rises on a wave of suspense to a place of beauty and hope.” – Publishers Weekly

“Haunting, terrifying, and achingly beautiful, The Troupe is a book to be savored, and it will stay with you long after you’ve finished reading. Very highly recommended.” – My Bookish Ways

“A beautiful novel that resonates as a mystery, historical look-in, thriller, and family drama. … Like a sepia photograph manipulated in photoshop, Bennett adds his dashes of color, bringing things to the foreground for brilliant moments all the more intense for the contrasted palette behind it.” – Staffers Musings

Read an excerpt from THE TROUPE here or find out more about the book and the Vaudeville era at www.silenustroupe.com.

Recently we were also pleased to announce that Robert’s second novel, THE COMPANY MAN, was nominated for an Edgar Award.

…it just gets refracted.

It’s a little amusing to hear some people who read my new novel The Troupe say that they’ve never heard of vaudeville.

Part of the problem is the term itself: “vaudeville” is a vague word for a vague era. It refers to a period in American history – before radio, and definitely before the advent of film – where the only entertainment you could really ever see was on the stage. Since this valuable commodity was limited to such an exclusive place, some enterprising people capitalized on it, and set up circuits of theaters across the country where acts could tour, living out of suitcases and hotels and performing in New York one night, Boston the next, and so on, all overseen by one centralized booking office.

That’s the structure of vaudeville. But it’s not what vaudeville is, no more than I am calcium or carbon or simply a moderately well-organized system of nerves.

It’s vague because it pulls its origins from English music halls and burlesque halls and beer halls: things that are an awful lot like vaudeville, but simply aren’t perpetrated on the same scale. And though everyone agrees that vaudeville died with the development of film, what most people forget is that it didn’t really die: it just got refracted.

Some vaudeville stars became silent movie stars, some of which went on to star in “talkies,” when sound became more manageable. And vaudeville theaters did not suddenly collapse with the release of film: rather, many were slowly converted into the first movie theaters.

Vaudeville was not replaced by film: it was the space or stage that film came to occupy. The audiences who liked vaudeville were the people the film industry wanted to speak to. In a very direct way, vaudeville defined the early days of film, which of course defined every day after that.

There is, of course, the matter of a live art – one performed in person, in the flesh – being replaced by a dead one. But I don’t think this is apt, either. Because part of what gives vaudeville its allure is the profound giddiness of such bizarre acts being performed in front of a live audience.

And do you think that giddiness isn’t inherent in this scene, performed by veterans of vaudeville and English movie halls?

Watching this scene makes you realize that people came to movies to get the same things they got out of vaudeville: musical performances mixed with comedy and acting. They didn’t want just one thing or the other. But there was a certain type of musical performance people wanted to see: they wanted something unusual, and striking, which the group The Avalon Boys readily provide.

But the scene also communicates the sheer joy of seeing live music. Laurel and Hardy spent what would today be an unconscionable amount of time simply watching the music, and reacting to it. The audience watches an audience, for seconds and frames on end. Yet the passiveness of the scene is overcome by Laurel and Hardy’s evident delight at what is happening.

They love this. Seeing this music is doing something to them.

And what it does is inspire them to dance. And though to some this iconic scene may be unfamiliar, the number of remixes and manipulations found on Youtube say it’s a long way from being forgotten.

In fact, it’s not just enough to watch the dance. People want to dance with them.

Yes, you are seeing Tilda Swinton – abstract, elite, aloof, intellectual Tilda Swinton – dance the Laurel and Hardy dance in Edinburgh alongside hundreds of people. Here’s another angle, shot from a crowd member at the flash mob:

Vaudeville has never really died. It set the mold for nearly every touring band today: every band or act has a booking agent, whose career wouldn’t exist today if vaudeville hadn’t necessitated its creation. But it goes beyond structure: look at W00tstock, which describes itself quite aptly as “nerd vaudeville.” Look at Human Giant, at Funny or Die, or Stella. Look at the Upright Citizens Brigade. These are all productions that want to relay to you not only humor, but the sheer delight of seeing such humor in real life.

Vaudeville is just one facet of the joy of the strange and unusual. This joy hasn’t ever died, nor will it. It just gets, like light, refracted, bent into other wavelengths and shot into different places, all of them rays of light, shooting into the dark.

The song has been sung in a variety of ways: it’s been sung in medieval courts, in Bunraku shows, in fields and in streets and mountains, until finally it’s found its way to vaudeville, where it tours the dives and slummy theaters, a splinter of the eternal gradually revealed in a world of drifting shadows.

The plot of the book is fiction, of course. But as for the conceit… sometimes I wonder. Possibly not.