Bloodlust brings on a delirium that’s difficult to describe. From the first squirt on the tongue to the last dying jerk of your prey under your hands, the whole experience builds and builds into a screaming fever pitch. Those with little imagination have compared it to carnal climax, but I liken it more to religious ecstasy. I have never felt more truly alive in my waking death than when I am taking the life of another person.

I didn’t start small, with the gentle siphoning of blood from a lover in bed. I launched myself into the midst of my attackers like a fury from myth.

And I didn’t just kill them. I tore them to pieces.

There were five or six men. I hadn’t been able to keep count when they attacked, and I didn’t bother counting them when I descended. They seemed to be one writhing, pulsating mass, a horde of insects best eradicated in a furious stomp of my boot. Before you found me, I wouldn’t have been able to fight off one of them, let alone half a dozen. But your blood made me strong, stronger than any human had a right to be. It evaporated my fear and propelled me forward into their ranks, my mouth twisted into a snarl.

One of them looked over his shoulder and saw me coming, his face half-illuminated by the cooking fire.

He opened his mouth to shout. I wrapped my fingers around his upper and lower sets of teeth and wrenched his jaw apart before he had the chance.

The others fell so easily. I gouged eyes, snapped necks, fractured ribs, tore open the tender flesh of inner arms with my burgeoning teeth. My gums split, mingling my blood with the blood of my assailants, as I fed from them again and again. Only one of them tried to flee, staggering into the dark and right into your arms. You broke his leg with a swift, efficient kick, then sent him hobbling back my way like a parent turning around a wind-up soldier wandering too close to the playroom door.

When it was over, I stood unsteadily amidst the bodies, panting hard. I was satisfied with what I had done, with no treacherous regret creeping in at the edges, but I didn’t feel exactly . . . satiated. The hunger was still there, quiet but present despite my churning stomach full of blood, and I didn’t feel as clean and vindicated as I had hoped. The horror of being beaten while my family burned to death still existed, seared into my memory though my body no longer bore the marks. The appetite for revenge those men had sown in me was still there, curled up tight and sleeping fitfully.

I gasped for air, a sob bubbling up inside me. I didn’t know why I was crying, but tears bore down on me like an oncoming storm.

“Come,” you said, draping me in your cloak.

“Where are we going?” I asked, already staggering after you. The bodies lying in a desiccated heap around the still-smoldering fire were hideous, but not half as gruesome as what had been done to my entire village, my family.

You shot me a thin smile that made my heart swell. 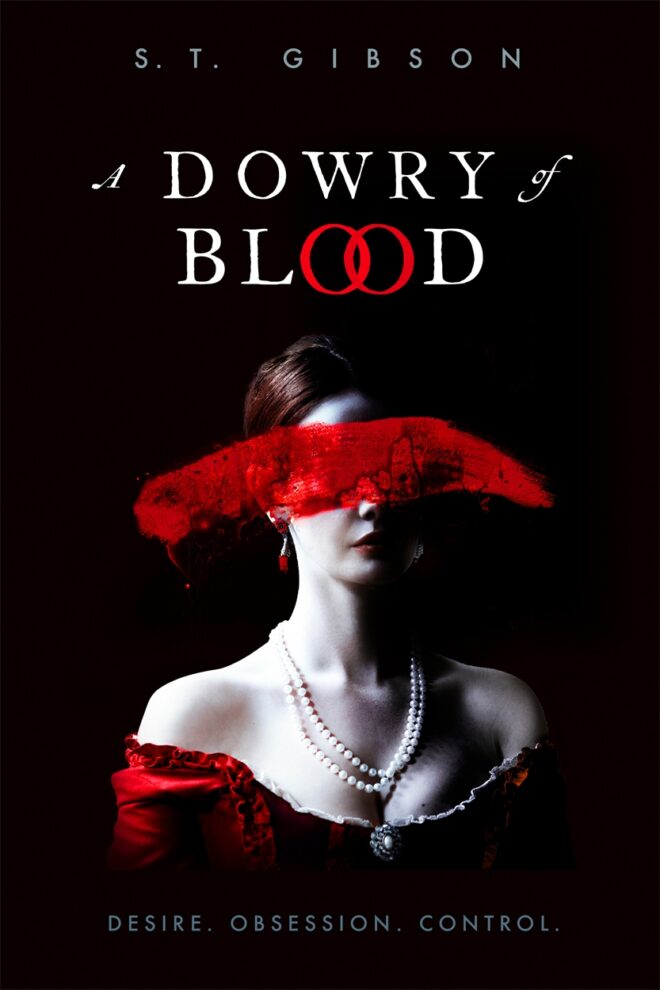 S.T. Gibson is an author, literary agent, and village wise woman in training. She currently lives in Boston with her fiance, spoiled Persian cat, and vintage blazer collection.

“Stunningly gorgeous and devastatingly romantic, you won’t want to miss this one!” Katee Robert, author of Neon God

“A powerful take of possession and liberation. This is a Dracula retelling unlike any other – undeniable and unforgettable” Rose Szabo, author of What Big Teeth

“Atmospheric and lush . . . it will haunt you in the best possible way” Genevieve Gornichec, author of The Witch’s Heart

“A dizzying nightmare of a romance that will leave you aching, angry and ultimately hopeful” Hannah Whitten, author of For the Wolf

“A thrilling and seductive Gothic rife with spine-tingling tension and dark romance. A Dowry of Blood left me breathless” Alexis Henderson, author or The Year of the Witching

“A Dowry of Blood is an intoxicating perfume that lingers – an undying love story where beauty and horror clasp hands” Rachel Gillig, author of One Dark Window

“Seductive, lyrical and rich with period detail . . . a dark triumph” Mary McMyne, author of The Book of Gothel

“A delectable jewel of a tale, shimmering with dark, beautiful prose” Tori Bovalino, author of The Devil Makes Three