I don’t have as much time for reading as I used to, these days. Day jobs and deadlines aren’t exactly conducive to being well-read, even though the folks at Orbit keep me nicely supplied whenever I do my periodic “Hi guys how’s the kids here’s a manuscript by the way any new books OK don’t mind if I do mooch a few” visits to their HQ in midtown. But despite my disconnection from the new/hot/now book scene, there are a few books and series for which I will stop, drop everything, and read myself blind. One such series is Kate Griffin’s Matthew Swift novels, of which the third, The Neon Court, is out now. 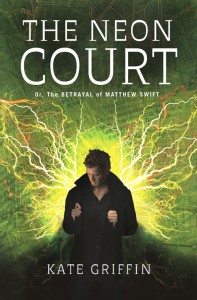 Whenever I try to browbeat others into reading these books, I’ve been using “the Dresden Files if written by Neil Gaiman” as my pitch — but frankly that’s doing a disservice to the Dresden Files, Gaiman, and Griffin all at once. The setup is similar to that of the Dresden books on the surface: each book chronicles the adventures of a much put-upon modern magician just trying to go about his life in an urban setting. The urban setting in this case is London rather than Chicago, and the magician in question is not a wizard, but an urban sorcerer. There are wizards too in Griffin’s world, note — and warlocks, and prophets, and the kinds of magic users who can’t be described because they don’t fit neatly into any recognizable paradigm. But amid this wildly diverse set of magically-gifted (and sometimes -cursed) people, urban sorcerers stand out because their power comes, to put it simply, from their love of city life. Urban sorcerers can’t sit still during rush hour. They feel its surge and ebb in their blood, far more powerfully than any natural rhythms. They talk to pigeons, weave spells out of the fine print on subway tickets, read portents in graffiti. And though their ancestors include druids and shamans and all the natural magic users made famous by history and fantasy, these days they become powerless in the green boondocks beyond a city’s exurbs. The life they need, to thrive, is of a grittier, wilder sort.

And because of this, the Matthew Swift books land somewhere in between the two camps of urban fantasy that have developed over the years. In fact, I think they’re a nearly perfect fusion. On the one hand we’ve got a typical pseudo-noir milieu, with Matthew as the cynical and lonely anti-hero in a gritty setting, occasionally waxing badass against unsavory supernatural characters. On the other hand, we have the city itself as a mystical, organic presence. In the second book of the series, The Midnight Mayor, Matthew is called to the aid of London itself when a terrifying entity called “the death of cities” arrives. To fight something so existentially powerful, Matthew must literally meet London’s soul and come to terms with it — both magically and in ways that any city-lover would instantly recognize. He walks its streets through light and shadow, and loves and respects both. He breathes its aromas: curry, car exhaust, rotting garbage, newly-minted money. He knows which urban legends are complete bunk, and which he can go and have a conversation with. By doing these things, Matthew finds power in the liminal spaces of city life — and Griffin joins the ranks of modern-day mythmakers like China Mieville, Ursula Le Guin, and, oh yeah, Neil Gaiman. But she does it all with a style and cleverness that’s purely her own. 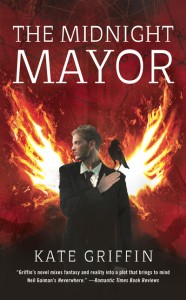 I’d never been to London before I read the first of these books, but I’ve seen the magic that Griffin captures, in passages like the one below. I’ve breathed the stench of the fishmarkets in Washington DC, and fought other buyers to get delicious eldritch horrors fresh off the boat. I’ve been lulled to sleep by the mournful horns of barges in New Orleans… and I’d swear I heard a haint’s cry, too. A few years ago I spent a few hours exploring an abandoned castle in the Back Bay Fens of Boston — one that no one else seems to have ever seen. See, Griffin understands that you don’t really need guys with pointy hats chanting in Latin to get the feel of magic. You can find it easily in places like this:

By 10 a.m., Chapel Street Market already smelt of cheese, fish, Chinese fast food and McDonald’s. It was a market defined by contrast. At the Angel end of the street, punk rock music pounded out from the stall selling pirate DVDs; from the French food stall, more of a van with a rumbling engine at its back, there sounded a recording of a man singing a nasal dirge about love, and Paris when it rained; at the cannabis stall (for no other name could do justice to the array of pipes, T-shirts, posters, burners and facial expressions that defined it, everything on display except the weed itself), Bob Marley declared himself deeply in love to the passing hooded youngsters from the estate down at Kings Cross. Outside the chippy, where the man with inch-wide holes in his ears served up cod to the security guards from the local shopping mall, a gaggle of schoolgirls from the local secondary bopped badly in high-heeled shoes to a beat through their headphones of shuung-shuung-shuung-shuung and shouded nicknames at their passing school friends in high voices that didn’t slow down for the eardrum. Fishmongers chatted with the purveyors of suspicious rotting fruit, sellers of ripped-off designer gear gossiped with the man who sold nothing but size-seven shoes, while all around shoppers drifted from the tinned shelves of Iceland to the rich smell of the bakery, wedged in between the TV shop and the tattooist’s parlor.

This is Griffin’s London: beautiful, filthy, quintessentially British, organically multicultural, electric, medieval, and half-mad. Most of Matthew’s adventures require him to engage with this teeming city-essence in ways both poetic and profane. Who’s to say that those size-seven shoes don’t have power? Wear them for a few hours on a cold rainy night, until you’re so miserable the blisters actually feel good, and they can summon the unstoppable, time-and-space-folding Night Bus. But make sure you have exact change before you board, or you’ll never get off.

Reviewer Faren Miller, in the March 2011 Locus, calls Griffin’s writing a “mix of eloquence and irreverence” — and while it’s the eloquence that hooks me, it’s the irreverence that has me screaming for more. The latest volume of the series starts off much like the previous two books, with Matthew suddenly finding himself confused and alone and in mortal danger. He’s quickly embroiled in a brewing war between two magical factions in the city: the Tribe, “a bunch of self-mutilating wankers” in his own terms, and the Neon Court, “a bunch of narcissistic wankers”. There’s a Chosen One involved — a fact which spurs nearly every member of the magical community to fits of laughter because Chosen Ones are just so cliche. But worse, the lights of London are beginning to go out, and there’s something evil waiting in the darkness. Only Matthew, his foul-mouthed apprentice Penny Ngwenya, and his not-quite-enemy — the anti-magic zealot and assassin Oda Ajaja — have any hope of saving the city from all these threats.

This third entry in the series has more of an ensemble cast than previous entries have been, in part because by this point Matthew has begun — quite against his will — to have a lasting impact on the people he meets, fights, and/or saves during his adventures. Penny, for example: oh, how much do I love Penny? A London-born daughter of African immigrants, a quintessential “nobody,” her talent for sorcery manifested after she suffered years of strangers’ abuse as a meter maid. She’s come into her own since Matthew reluctantly agreed to teach her the ways of magic in the previous book, and boy, does she know it. This scene’s in The Neon Court, after Penny pulls off a difficult teleportation spell to save Matthew’s bacon:

I was sprawled on a plain concrete floor in a room full of boxes. The boxes said in several languages, ‘Finest Fortune Cookies; Export Only”. Someone had cleared a space in the middle of this floor and laid out in a clear and careful magical circle, hundreds and hundreds of first class postage stamps. Some of them were still smoking now. I prodded one with the end of my finger. It crumbled into dust at the touch. I said, “Jesus, how much postage and packing did you use?”

“You said you needed rescuing!”

I managed to make it into an upright sitting position, and lingered there. “It’s a recorded delivery,” I explained. “You’re supposed to use an equal postage relative to the mass of the object being delivered. You’ve got enough stamps in this damn summoning circle to summon the ghost of Orson Welles and a five-course meal.”

“I did work out the masses!” she replied. “It’s not my fault you’re a weird skinny freak!”

“The Post Office even issues a chart! Number of stamps relative to mass times distance of object being teleported…”

“But I did it, didn’t I?” she triumphed. “I mean, all by myself, your kick-ass apprentice, I like totally did it, a spell that most people can’t and I did it and I got it right and you’re here and safe and that’s what matters, see?” 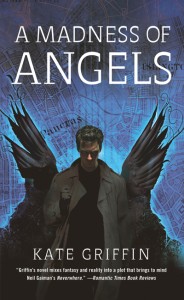 So enough flowery praise. Let’s get down to business, shall we? You need to read these books. I say this out of pure selfishness; if lots of you do so, then there are likely to be more Matthew Swift books, and I will be a very happy girl.* But I suppose I can also be non-selfish and say that Griffin’s fantasies are full of chewy delicious prose and clever ideas to delight even the most jaded reader’s palate, and you will find them very very much worth your time.

So hop to it, and go get you some Griffin.

*Though the folks at Orbit might not be happy about it. I’ve pretty much been stalking poor DongWon to get an early copy of The Neon Court, and if more books are forthcoming then I’ll just have to start stalking him again. (Sorry, DongWon, but you have no business editing such good books if you don’t like being haunted by obsessive bibliophiles. I’m sure you’ll get over it.)