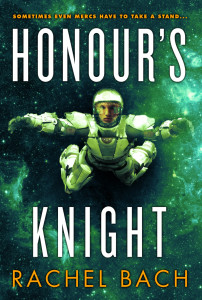 In the interview section at the back of FORTUNE’S PAWN, I explained that the reason I originally decided to write the Paradox books was because I wanted to read an action packed SF romance and couldn’t find one, so I created my own. This is a true story, but it’s also true that my sudden reading urge wasn’t the only reason I decided to write about a female soldier turned mercenary who fights aliens, has a romantic subplot, and gets herself involved in a conspiracy that might doom all sentient life in the galaxy. You see, before all that, before Paradox and the xith’cal, even before Devi sauntered into my brain and informed me that I was writing her novel right that minute, I was already on the hunt for somewhere to put the Lady Grey.

I’ve been in love with powered armor since I watched my first mecha anime as a pre-teen renting anime tapes from Blockbuster in the dark days of the mid-90s. The idea of wrapping a person with all our fragile, soft flesh and emotional instability inside a machine that granted super human powers, but only under limits and often at huge costs, was like catnip for my young story-obsessed brain. I actually liked the price even better than the power it bought. Power alone is boring. It’s what power does to people—why they want it, how it changes them, and what they’re willing to do to keep it—that’s where the novel is.

If you’ve ever enjoyed a well told superhero story, you already know that the most compelling part of a any hero is their humanity. We don’t love Batman because of his toys, we love him for what he does with them, and why. We are, in short, far more interested in the man than the bat. Similarly, superheroes who have no weaknesses are boring. Even Superman, the most wish-fulfillment of all wish-fulfillment characters, needed kryptonite to be compelling in the long term.

Powered armor takes this idea a step further. Devi’s suit gives her what are essentially superpowers. She’s super fast, super tough, and super strong. She has eyes in the back of her head, the ability to look up almost any information with a thought, and a literal photographic memory. But none of this power is really hers. She’s just the driver, the breakable, fragile human at the heart of everything, and the knowledge that her power can be damaged, taken away, or even simply run out of energy, is what makes her plights that much more interesting and tense.

Powered armor certainly wasn’t the only way I could have done this. There are a million ways in Science Fiction to make someone super powered. I could have given Devi implants, or made her a genetically modified super soldier. But all of these things would have been hers, and I didn’t want that. I wanted Devi’s powers to be something she something she had to pay for and  could only use at great personal risk, because the person who has the guts to willingly put their neck on the line for the power to achieve their goals is also the person who can function without it. Take Superman’s powers away and he becomes a whiny embarrassment sulking in his Fortress of Solitude. Take Batman’s money and gadgets away and he’s still freaking Batman.

This vulnerability is why I think powered armor is such a staple in our collective imagination. It’s the ultimate unstable power—a supreme weapon that’s stealable, breakable, hackable, and only ever one technological glitch away from being a metal mausoleum—and the character who chooses to use it even in the face of all those flaws is practically guaranteed to be the sort of hardcore badass you want to read about. I put Devi in the Lady Gray precisely because I wanted her to be the sort of heroine  who, when I blasted her suit full of holes, would use the sharp edges to go for her enemy’s throat. The Lady Gray made Devi every bit as much as she made the Lady Gray, and I wouldn’t want either of them any other way.

Rachel Bach is the author of Paradox, a three part, heavy ordinance blast of Science Fiction that starts with FORTUNE’S PAWN (US | UK | AUS) and continues with HONOUR’S KNIGHT  (US | UK | AUS), out now! Want to find out more about the Paradox series? Read the interview, which appeared in the back of FORTUNE’S PAWN.